Papa left the kitchen to supervise the tree decorating while the ladies did the dishes. Working in sync, Maman scrubbed and rinsed while Blanche wiped with their favorite cotton towels, made in Lowell. In no time, the job was done.

With counters cleared and dishes stowed, Maman put the kettle on for a second cup of tea.

“Would you like a new tea bag?” Blanche asked.

“As you can guess, it’s the caffeine in tea” Maman replied.

“Of course. Merci.”  Yet again, Blanche realized what a good teacher Maman was but now wasn’t the time to prolong the vocabulary lesson. Instead, she headed for the living room. “I guess I’ll go help with the tree now. Enjoy your tea Maman.”

A bizarrely-decked spruce welcomed her. With a few kelly green and carmine red garlands hung vertically, it looked droopy.

Maggie and Byron were admiring their handiwork while Antoine was obviously unimpressed. “You guys were supposed to wind the garlands around the tree in a circle, not just throw’em on the branches like that. What a lousy job. Looks stupid. You shoulda let me and Blanche do it.”

Maggie didn’t agree. “You’re the one who told us to put those red and green things on. That’s what we did. Then you and Blanche were gonna put the icicle strings on. That’s what you said. Anyway, I think it’s nice and I’m not gonna rip those decorations off. Besides, you’re not the boss of the house.”

Maggie looked towards her father, apparently oblivious to the quibbling. Papa was slowly removing nativity scene figures from the brown cardboard box where they had been hibernating for eleven months. One by one, he delicately removed their white tissue paper blankets and, with the kiss of his agile fingers, awakened them from their slumber.

First to emerge was an angel, wings spread and carrying a golden banner with  ‘gloria’ inscribed in royal blue. Then came to life, a solemn-faced, sandal-shod shepherd holding a crooked staff. Two white sheep and a little lamb joined their master. A couple of kneeling characters appeared next – a bearded, patriarchal, Joseph and a girlish Marie, heads bowed and hands crossed in prayer. 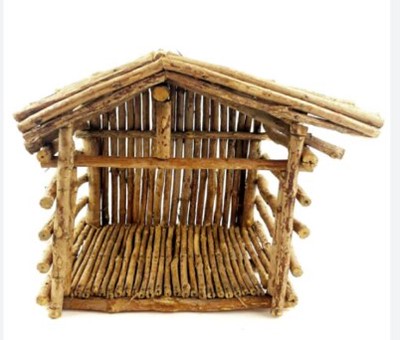 Papa placed the statuettes in the foot-long wooden hut Pépère had built the previous summer with branches gathered in the woods behind the lake. Blanche watched him handle the figurines as if each were sacred.

The juvenile fussing ceased and all four children gathered round their father.

Byron broke the silence by gently asking “Papa, can I help you s’il vous plaît? C’est beau la crêche”; the crêche is beautiful.”

Maggie joined in. “I wanna put the donkey and the bull inside the stick house. It’s my turn this year.” 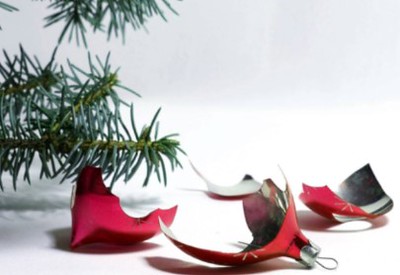 Antoine brushed her off. “You were too young to even know what was goin’ on last year. All you did was cut your fingers on broken Christmas tree balls. I bet you don’t even remember but I do cuz we ran out of  ‘Stars ’n Strips’ bandaids. I’m the one who should take care of the donkey and the bull this year cuz Blanche did it last year and I’m next in line before you babies. And I wanna do the camel and les rois mages too. Can I do the Magi? Huh Papa? Can I?” 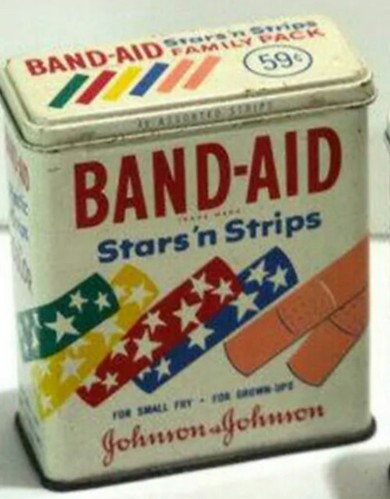 “What about le Petit Jésus” Byron noted. “He’s the most important person in the crêche isn’t he Papa?”

Blanche tried to stamp out the rising tension. “Assez, that’s enough! We all know Papa does the best job so let’s not fight. Here’s a whole box of ornaments to fill up the bare spots on the tree. Let’s do that while Papa takes care of the crêche. How ’bout it?”

Maggie insisted “Yeah OK but I still wanna put the animals inside the stick house.”

Byron added “and I want le Petit Jésus in there since Christmas is His birthday, right Papa?”

Although his voice was veiled with fatigue, Papa gave instructions firmly.

“Maggie, here’s the donkey. Put it right there behind Joseph. And you Byron, put the bull behind Marie. The camel arrives later, with les rois mages, when they come to pay tribute to le Petit Jésus. Oui Antoine, you will be responsible for the Magi at the end of the first week of January, the feast of the Epiphany.”

In an apparent wave of selflessness, Maggie asked “What about Blanche? Will she put le Petit Jésus inside the crêche?”

Answering for her father, Blanche assured “It’s not yet time for le Petit Jésus. He was born at midnight. When we get up on Noël morning, He will be in the crêche and the presents will be under the tree. Le Père Noël and le Petit Jésus arrive together. Isn’t that right Papa?”

Maman interrupted the exchanges when she entered the living room to announce “il est tard les enfants. It’s late. Let’s all get to bed early to be full of energy for Christmas Eve.”

Right away, Blanche agreed. “C’est bon Maman. Good idea. Je suis si fatiguée, I’m so tired. I don’t want to doze off at la Messe de Minuit and I’ve been so looking forward to le Réveillon (2). We don’t wanna be tired for all that fun, do we Antoine?”

Blanche grabbed her brother’s arm in an effort to lead him towards the bathroom. “Come on Antoine. Let’s go brush our teeth.” Instead of acquiescence, she obtained disappointing news.

“We weren’t gonna tell you right away when you got home Blanche, but there’s no Réveillon this year. So Maman, what’s the use of goin’ to bed early? I don’t understand why we can’t go to la Messe de Minuit at least? If we can’t, Noël will only be half a celebration. That’s no Christmas spirit.”

Papa and the two little ones were still in the living room, out of earshot.

Blanche, noticing Maman’s fatigued eyes drop and her erect posture droop, decided to deal with her persistent brother. “Are you being naughty or nice Antoine?”

Quick to the draw he sang:

You better watch out.
You better not cry.
Better not pout.
I’m telling you why….

“I’m too old to believe in all that Santa Claus stuff and I never thought he was a real person anyway. Besides, a lotta times when I think I’m bein’ nice, the teacher says I’m bein’ naughty so what’s the difference? Christmas’ll be lousy this year. And the two babies did a lousy job on the tree. And I don’t care ‘bout Santa comin’ to town. Santa stinks.”

Blanche interrupted the soliloquy. “Well Antoine, you have no idea how awful I felt when I heard about Papa falling sick and going to the hospital. I couldn’t even call home or ask questions. It was like I didn’t have the permission to be worried. I just had to keep quiet and stick to the routine as if nothing horrible was happening. Papa is home now and he has to rest. The little kids get all jittery at la Messe de Minuit and end up falling asleep in the pews anyway. How about if Papa were still in the hospital, huh? How would you feel about that? This year is different so we all have to be different and that’s the story.”

Antoine did not look pleased with his big sister’s reasoning. “That school sure changed your head Blanche. Now you’re preaching like some teacher or something. You just said you were looking forward to la Messe de Minuit and le Réveillon. So how come, all of a sudden, it’s no big deal to skip it? You’re weird. Why shouldn’t I still wanna do all the fun Christmas stuff?”

Maman looked discouraged. Blanche understood that her mother wasn’t up to verbal jousting so she took the bull by the horns.

“Maman, I know how much you love la Messe de Minuit. How about if you and Antoine go. I’ll stay here and look after the little ones. I don’t mind. It’ll be special. We’ll sing and look at the crêche and the Christmas tree and…”

Her throat tightened. “Anyway, I don’t really feel like seeing that huge crowd at church. I just want to be home close to Papa. That’s not a half of a celebration for me. It’s a fantastic Noël.” A tidal wave of emotion prevented her from pursuing.

Antoine jumped for joy. “That’s the best idea ever! Isn’t it Maman? Can we do that? Can we Maman? Blanche’ll take care of everything and you won’t have to worry about anything and you’ll sing ‘gloria’ and all those songs with Madame this and Madame that and all your lady friends and wish everyone a  joyeux Noël and all of that good stuff.”

Maman cleared her throat and straightened up. Her lilting voice rang in the kitchen. “C’est une idée. It’s an idea. I have the necessary ingredients for egg nog and I kept a couple of tourtières in the Frigidaire. When we return from church, we’ll have our own little Réveillon, just the six of us. Bonne idée. Merci ma Blanche.”

Antoine piped in. “You’re the best Blanche. I always wanted to have a big brother instead of a big sister but sometimes I guess, you’re just as good.”

Read Chapter 45: A Measure of Mirth

Read Chapter 47: Smile upon our joys