After hugging her mother, dropping her Samsonite into the trunk and sliding into the Plymouth, Blanche sighed “si contente d’aller chez nous (so happy to go home).”

Maman smiled. “Les petits (the little ones) are anxious to see you; they promised to behave while watching over Papa.”

Blanche hesitated before asking “Comment va-t-il? (How is he?).”

“Happy to be home, happy you’re coming home”  was her mother’s laconic response.

Blanche knew she had nursed Papa without ever displaying anxiety. Such a stoic Pennacook she would have made. Insisting on details would be like ripping off a newly-formed scab. Thus, few words were exchanged during the ride back to Lowell.

Maman’s face lit up. “Papa likes that song. But I think Papa’s voice is better than Crosby’s, don’t you?”

Without waiting for a response, she accompanied Bing in the final verse, letting her soprano lilt through the nippy air. Apparently, repairing the failing car radiator had not been a priority over the last couple of weeks.

As the Plymouth pulled into the driveway, Blanche saw Maggie wiping a corner of the kitchen window and peeking through the circle traced by her little hand. The sound of excited voices, tapping feet and creaking doors followed.

Antoine loudly shushed his two younger siblings. “No screaming allowed you guys! Papa is resting. Just stay here while I help Blanche with her suitcase.”

Blanche noticed that Antoine had matured. Slipping into the eldest’s shoes had undoubtedly wisened him.

“Let me,” he gallantly offered as he opened the car trunk. “I’m getting stronger every day. Can’t you see it?”

Before removing the suitcase, he grabbed his big sister and hoisted her several inches above the frigid ground.

His arms slipped into the hugging position and gravity did the rest. Both Blanche and her now-bigger brother tumbled onto the salt-sprinkled driveway. They didn’t tarry to get up. Both looked towards Maman. Her only reaction was a smile and a pointed finger towards the side door. No reprimand for soiling one’s clothes this time.

A multi-sibling wrestling match ensued once everyone inside. Both Maggie and Byron jumped into Blanche’s arms. Antoine joined in and screamed “pig pile” as the four fell to the floor.

“Shush les enfants! Let’s not make too much noise. Papa must be resting” Maman mumbled.

“I’ve been resting for days and it’s tiring.” Papa had slinked into the kitchen and witnessed the horsing around. “Don’t I get a big hug too ma fille?”

Blanche crushed the urge to give her father the tightest bear hug possible. Slightly bent over, he appeared fragile. The translucent green of his eyes was deeper, like the surge of a wave in the open sea. His face was sallow and his cheeks had lost their plump. He seemed simultaneously younger and older, a vulnerable, childlike version of his adult self.

Blanche’s arms encircled her beloved Papa. Ever so delicately, she placed her head on his chest, breathing in his presence.

“Plus fort que ça ma fille; je ne vais pas casser! (Stronger than that my girl; I’m not going to break!),” he laughed.

She did as bid and willed herself to giggle instead of sniffle. “Je t’aime tant Papa! (I love you so much Papa!)”

Maggie crashed the solemnity of the moment. 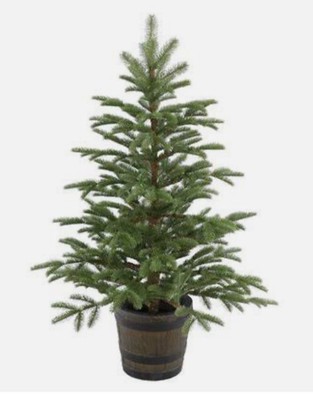 “We got a teeny tiny Christmas tree this year. I wasn’t happy because I wanted the biggest one at that Cal Laughing (2) place. Maman said we got a little one so we could decorate it all by ourselves as soon as you got home. So come on! Let’s do it right now Blanche. I can’t wait any more. The boxes of decorations are out and Maman even got me my very own ornament in the shape of a little angel and it looks just like me with blonde hair and blue eyes and I’m the only one here with blonde hair and blue eyes so no one can take it.”

“I’m sure Blanche would like a nice bowl of tomato soup to warm her up,” interrupted Maman. You’ll decorate after dinner. And I’m sure she would like to get out of her school clothes and maybe put on the pyjamas we got her as a welcome-home gift. How does that sound Blanche?”

Maggie answered for her big sister. “Oui, oui (yes, yes)! I’m the one who chose’em at Bon Marché. So you can thank me if you like’em. I wanted some too but they only had grown-up sizes. When I grow up, can you give’em to me please? They’re so pretty and soft. They’ll make you look like an elf who helps Santa.” 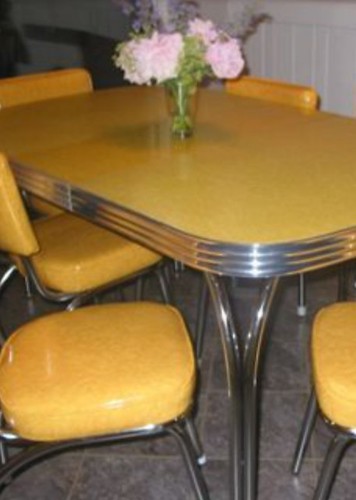 “À table tout le monde (Come to the table everyone),” Maman coaxed. Let’s have soup and nice fresh bread from Côté’s. It was warm when I bought it. C’est si bon, le pain (it’s so good, the bread). And dessert is my grape-nut pudding with un peu de sirop d’érable (a little maple syrup).”

Antoine shouted from the laundry room where he had hauled the Samsonite. “Is there any whipped cream too? I like grape-nut pudding with whipped cream and maple syrup on top. Boy, am I hungry. Let’s eat.”

Maman’s simple meal was better than any gourmet concoction Blanche could dream of. Sister Mérilda sure made a good bûche de Noël but could she whip up this thick, velvety soup? It didn’t matter. Blanche was finally home, sitting at the yellow formica table, enjoying every spoonful of the piping hot, peach-colored bisque.

The best treat of all was having dinner with Papa. Apart from Sundays, he never shared their evening meal. Endless hospital rounds and multiple office appointments made for long hours. And when he arrived home moments before for the little ones’ bedtime, he would join in for the evening prayer.

Byron and Maggie had a list of all the people they wanted ‘le Petit Jésus’ (Little Jesus) to bless, without forgetting all of the neighborhood cats, dogs, hamsters, goldfish and whatever other creatures inhabited the nearby households.

The children’s devotion always ended with the traditional French-Canadian prayer.

(My little Jesus, my little Lamb
Make of my heart a soft cradle
Child of God, Child of Bethlehem
I adore you and I love you.
Come Jesus, come my Savior, come into my heart.)

In no time, Blanche, in new red flannels, and three siblings, in hand-me-down green plaids, headed for the living room where the little Norwegian spruce was standing in its wooden tub waiting to be dressed.

Maggie was the most impatient. “Come on Blanche, what are you waiting for? Let’s fix up our Christmas tree right now. Your pyjamas look good on you. Remember they’re mine when I grow up.”

Blanche decided she wanted to join her parents in the kitchen. Papa was finishing his pudding and Maman was sipping a cup of tea. “You guys start, OK? I’m gonna go do the dishes.”

Upon entering the kitchen, where the tangy tomato aroma lingered,  Blanche approached her mother. “I always help with the dishes Maman. Don’t worry; I won’t drop anything.

I do all kinds of cleaning at school and I don’t mind at all. Dishes are no big deal. Let me do them. You enjoy your tea.”

She felt like telling her parents all about library duty with Sister Claudette but decided against it. Too long of a story and still hidden in her secret garden.

“Oh merci ma fille,” Maman said. “I’ll wash and you dry. Papa, would you supervise les petits (the little ones), s’il vous plaît? I don’t want the Christmas balls to turn into shards embedded in my mother’s antique rug!”

Blanche noticed that Papa’s legs wobbled as he got up from his seat. He pressed both hands on the table to stabilize himself, straightened up and thanked his wife with a snippet of song.

He took a step towards his wife as she stood tightening apron strings around her still-slender waist. Blanche understood that Papa would have loved to take Maman into his arms and fox trot around the kitchen as they had done so many times before. The healthy meal could not instantaneously restore his vigor. Even so, his pianissimo baritone sent a warm wave of affection towards the two adoring women standing at the bowl-filled sink.

Read Chapter 45: A Measure of Mirth

Read Chapter 47: Smile upon our joys