Mundane activities filled Thanksgiving weekend. Maman asked Blanche to haul four large, mothball-perfumed boxes up from the basement. Long ago, they had served as receptacles for a wedding trousseau of fine linens and dainty lingerie. Although they had lost their peachy color and satiny touch along with their contents, they had lovingly been recycled for storage. The first Nor’easter had not yet blanketed the Lowell area but a snowy December was looming. It was time to assess the state of the family’s winter gear. Blanche was thinking of a way to persuade her siblings to try on an assortment of jackets, sweaters, hats, mittens, socks and boots. She decided to turn the job into a dress-up game.

“Help me open the boxes Maggie”, shouted Blanche in an effort to distract her sister from her coloring book. “Come see what you’d like to wear when you make your first snowman this winter.”

Maggie was not so easily deterred from her artistic endeavors. “I’m finishing a page with big pumpkins to decorate your wall at boarding school.

“I’ll help you Blanche” offered Byron. “I’m supposed to have Antoine’s Red Sox tuque this year cuz his head grew a lot and I get his hand-me-downs.” His eagerness to lend a hand was undoubtedly stimulated by the prospect of inheriting a coveted garment. 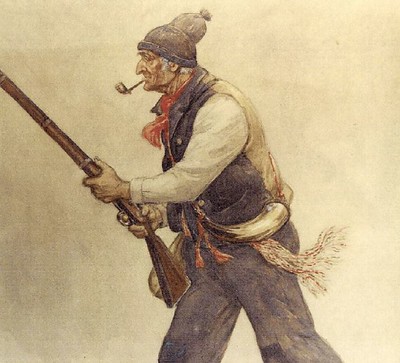 “It’s not a ‘tuque’ you dummy. ‘Tuque’ is French and the Red Sox aren’t French so it’s called a winter hat. Those big ugly things that Maman’s old lady friends knit are ‘tuques’ but not my Red Sox hat. And anyway, what makes you think I’m gonna give it to you? Maybe I wanna keep it as a souvenir of the time Mon Oncle Freddie brought me to Fenway Park and you couldn’t go because you were still a baby. Anyway, it’s mine!” Once again, Blanche observed how Antoine appreciated the use of others’ items but had a rather difficult time relinquishing his own.

“OK, OK you guys. Maman is in the other room doing my laundry. I have to go back to school tomorrow. This is my last day home and I have some schoolwork later on so we won’t be able to spend hours playing Parcheesi like we did last night. Can you please quit fighting for once?” Blanche’s voice reached a painfully high pitch making Antoine, Byron and Maggie peer at her.

She continued. “OK. Let’s get on with the show. Grab one of the four boxes, open it and check out what’s inside. Why don’t we do ‘show and tell’ like when we prepare our Halloween costumes except that these are our snowball fight costumes. How about it?” 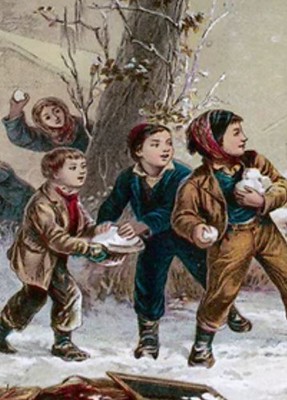 “Maman said she doesn’t like snowball fights because you can get hurt, like that kid Gary down the street who got one in the eyeball and had to go to the hospital and then he couldn’t see for awhile but finally he was OK.” Byron warned.

“You’re absolutely right Byron. But what do you think of my plan? We can get this job done in no time and Maman will be happy and it’ll be fun. Whadaya say?” Blanche insisted.

“OK, OK, let’s do it. I want the box with my Red Sox hat.” Blanche knew Antoine wouldn’t let go. Sighs and “oh boys” punctuated the execution of the task. Finally, she asked her siblings to show off their winter finery.

Maggie sported shiny red rubber wellingtons which disappeared under a fluffy chestnut brown parka. A ratty black beret sat like a warped vinyl LP on her head. Grey leather gloves dangled from her little hands. “Hey! Look at me! Could this be a new Halloween costume do you think? Don’t I look spooky?”

The belly laugh responses were so loud that Blanche thought for sure the next-door neighbours could hear. She saw Maman peek into the front room and hide in a corner to witness the show.

Byron was bundled in a forest green L.L. Bean vest with a red plaid flannel collar and a series of pockets up the front. A grey cap with ear flaps hid his round head and half of his neck. Candy cane printed longjohns folded over his ankles. “There were no boots in that box but look at these neat gloves with drawings of leaves on them.”

“That’s Papa’s hunting stuff” Antoine specified. “Yeah, pretty cool. Maybe you wouldn’t last too long in the woods with bare feet though. Don’t you guys think I look the coolest?” Antoine was wearing a shabby mustard-colored buckskin jacket with scraggly, uneven tassels hanging from the sleeves and waist. A long, wide, moss green wool scarf was wound around his neck. His hands, hidden in large red mittens, held up a pair of yellowed longjohns with strategically-placed front and back flaps snapped closed. The precious Red Sox hat was stretched over his round head. A hole yawned between the words “Red” and “Sox.”

“Yeah I guess you can have this hat Byron” proclaimed Antoine as he removed the headpiece with the sweeping gesture of a musketeer waving a feathered felt chapeau. “It doesn’t fit me any more and I’ll just ask Mon Oncle Freddie to get me another one next time we go to a game. Here you go.”

“Yeah I can see why you don’t want it anymore. It has a huge hole in it. I’m sure Mon Oncle Freddie will invite me next time and I’ll have my own Red Sox hat!” Byron stopped there.

“You guys know that I’m learning embroidery at boarding school right?” Blanche noted. “Well, I’m not very good at it but I can sure darn socks and mittens. I’ll mend the hat and you’ll be able to wear it when you play outside Byron. Maman will get you a better one for school.”

“Wow Blanche. I didn’t know you learned stuff like that. I don’t want Maman to waste money on a new hat. I’ll take this one since Antoine is generous enough to give me a holey hat. Ha! Ha! Ha! Ha!”

The two boys laughed heartily and the sisters joined in. Blanche noticed Maman, smiling, still hiding in the hall.

Maggie squeaked “Why didn’t you dress up Blanche? What’s in your box?”

“Oh, this box has all of Maman’s things and I don’t want to mess them up” Blanche responded holding up her mother’s favorite plaid Pendleton jacket and a canary yellow turtle neck. “My old winter stuff is fine. I don’t need anything. Anyway, I got a ton of new things for school so I’m all set.”

The dress-up hadn’t lead to allotting winter gear and the items strewn all over the front room hadn’t been put away. Blanche concluded that nothing had been accomplished that afternoon. And yet, everything had fallen into place because the loving bond among her siblings had tightened.

Blanche was busy selecting a Latin phrase to comment at the next class. She found a list in the Webster dictionary. Reading them aloud made her think.

“ ‘A posse ad esse’ – from being able to being. Does that mean that once you’re able to do something, that thing becomes a part of you, like Ma Tante Lucie being able to cook all kinds of dishes without using recipes and then she becomes a good cook? Or cousin Renée being able to stay on her tippy toes for a long time and then she becomes a real ballerina? Nope, I’m not gonna choose that one. Too hard to explain. This one’s nice – ‘amor vincit omnia’, love conquers all. That’s true. I love Antoine and that makes me let go of my anger when he breaks my things. But no, I don’t wanna talk about him. Here’s one  – ‘ad astra per aspera’, through adversity to the stars. Makes me think of the time Titi and I climbed to the rooftop to see the stars but that has nothing to do with Latin. Maybe it means hardship sometimes helps you reach your goals? That’s what Papa told us. Yeah, maybe I’ll choose that one. But no, I don’t want to talk about anyone in the family because it’ll make me homesick.”

Many other proverbs provided food for thought. She finally chose “Tempus Fugit”.

The next day was over in the blink of an eye. After a fitful night’s sleep, Mass at Notre Dame de Lourdes Church and a turkey sandwich, she was on her way back to SFA. This time, the farewells were harder for her siblings but easier for her because she knew what was coming.

Maman was busy getting the kids ready for their return to school so Papa chauffeured. They passed the roadside ice cream stand, closed for the season, and Blanche remembered her first time on that road. She didn’t miss the ice cream because the trunk of the car carried something special- a large box of two dozen individually-wrapped Red Delicious apples from Drew’s Farm.

“After Thanksgiving, these are the best treats for you and your friends. After all, ‘an apple a day keeps the doctor away’ right? But I’ll never be away from you ma chère Blanche. Mon amour will be right there every instant.” Papa said.

Blanche felt her tummy tighten when her father turned into the now familiar drive. She saw Titi and Andy traipsing on the grounds with Madeleine and her tension eased when their giggles rippled through the crisp afternoon air.