A bear hug replaced verbal goodbyes between the two friends. Blanche strutted down C’s front steps with a swing in her hips thinking of the Animals, the Dave Clark Five, Gerry and the Pacemakers and the other bands she had heard that afternoon. When the singles ran out WBZ took over.

She hopped into the Plymouth and turned towards her three jolly-faced siblings holding Woolworth bags in the back seat. “Maman got us new notebooks, Ticonderoga number two pencils, cuz they’re the best, and more school stuff.” Antoine announced, his mouth outlined with dried coffee syrup.

“You forgot our twelve-inch rulers Antoine. I’m really glad to have a new one since you broke mine and…” Byron stopped abruptly. He usually never complained about anything but this fact warranted specification.

Maggie took over. “And I got a box of jumbo crayons to help me draw inside the lines and a new coloring book too. It’s a Halloween one because witches and ghosts are my favorite. Maman and I shared a strawberry frappe” she added. The pink traces on her jacket confirmed.

“Did you have a good time with Cecile? Was her mother there? What did you do ma chérie? I’m glad you have made good friends.”  Maman didn’t seem to expect answers. “How about stopping at Lemieux Market for baked beans? Wouldn’t that be a treat? Dinner could be ready in a jiffy. Yes, that’s what we’re going to do.”

The children yelled “yes” and insisted on accompanying their mother inside the small neighborhood store.

“It would be quicker for me to run in and out by myself” Maman assured. “But Monsieur Lemieux always enjoys seeing you so pourquoi pas. Please don’t touch everything on the shelves” she added, turning towards Antoine.

Monsieur Lemieux, the owner, manager, cook, and ring leader of the popular Franco-American shop was busy at the back supervising a young employee serving Lowell’s hallmark baked beans. As soon as he caught sight of Maman, his voice boomed. “You see that lady over there? Do you know who she is? Well let me tell you. Her husband is the doctor who saved my son’s life – Dr. Urbain Rejean who works at Saint Joseph’s Hospital. Last summer, my kid developed a really high fever and was moaning and groaning with belly pain. It got worse and worse and my wife persuaded me to call the doctor in the middle of the night. He came over, felt Paul’s belly and said the young man needed to be operated on right away. He took my son in his arms, brought him to Saint Joe’s and did the surgery himself, just in the nick of time. He told us later that Paul would have passed because of a busted appendix. That’s the story my friends. And take a look at my boy now.” He pointed towards a teenaged version of Ichabod Crane about to pour a huge ladle of piping hot beans into a round white cardboard container. Paul seemed flustered when the customers checked him out. The beans spilled, fortunately right back into the enormous crock pot. 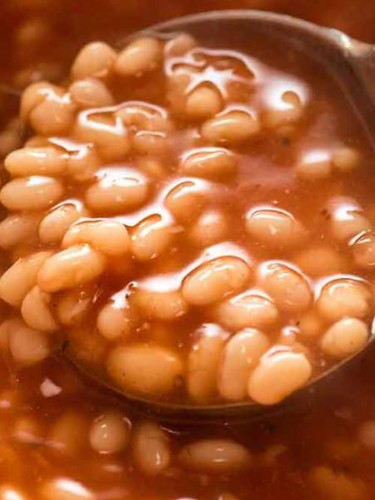 “I told you how to manoeuvre the ladle to quickly get the beans into the container Paul. Now try again. Sorry for the delay Madame Roussette. I’ll make sure you get some big chunks of lard, OK?”

Blanche figured Madame Roussette was one of those nice old ladies whose favorite pastime was food shopping and observing young people learning all about work and life. “Pas de problème mon garçon. And yes I’ll have some of that lard s’il vous plaît. C’est très bon.”

Monsieur Lemieux addressed the four customers waiting in line for their quart of beans. “You won’t mind if I serve la femme du Docteur first do you? Here are her kids. Comment ça va les enfants?”

Maman immediately responded. “Oh no Monsieur. We’ll keep our place and wait just like everyone else. Cutting the line is not a good example for les enfants. And anyway, we want to see the other goodies you’ve got today don’t we? Blanche, take Byron and Marguerite to the bakery shelf. I hope you still have some of that brown bread which accompanies the beans so well. Antoine will stay with me.”

Blanche noticed that the customers would have gladly let her mother go ahead of them but nevertheless appreciated avoiding further delay.

Blanche and the two little ones checked out what was left of the day’s bakery items – a couple of loaves of white bread and one of the famous Lemieux brown breads baked in a round coffee can, a bag of pecan rolls, an apple pie, a half dozen oatmeal raisin cookies, three raspberry turnovers. “Take the brown bread Blanche. There’s only one left. We’ll cut it all the same for everyone and share it.” Byron never lost his sense of fairness, Blanche noted. “OK Byron. Do you think Maman wants anything else?”

Maggie piped in “I want a little white bread cuz it’s really soft and I can spread a lot of butter on it all by myself.”

“A white bread for the family princess. Here, you want it so you hold it.” Blanche ignored the pastries because Maman had specified that a fruit cocktail would be best after the rich Thanksgiving desserts. She headed back towards her mother to hear Antoine listing all of the Lemieux specialties. Apparently he had taken it upon himself to educate a new customer who was unfamiliar with French Canadian fare. 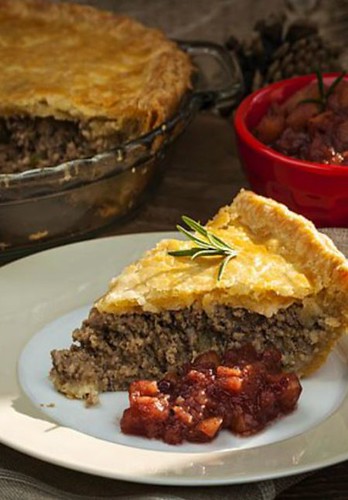 “This pork meat spread is called ‘cretons” and is great on crackers. I like to spoon it right into my mouth but my mother isn’t happy when I do that. You see a few pies here. That one is ‘tourtière’ and is made with ground pork and potatoes and all kinds of spices and is really really good. You should taste it. That other one is ‘pâté au saumon’. It’s pink inside because it has salmon. It’s very good too. And right there is my favorite  – chicken pot pie with flaky crust, a ton of white meat and a few peas floating around in yummy creamy sauce. This is kinda making me hungry! And here’s some American chop suey, macaroni and cheese and my other favorite, ‘pâté chinois’ with hamburg and corn and a lot of mashed potatoes on top. My Maman makes that and the other things too but everything Monsieur Lemieux has is almost as good so Mister, you can’t go wrong when you buy your food over here. Everyone in town knows Monsieur Lemieux is a great cook. And don’t forget your dessert. Today he has grapenut pudding and tapioca and egg custard and more good things in the bakery over there.” Antoine had blurted the spiel in front of his visibly astounded mother and siblings.

“Well thank you very much young man. You look like you know what you’re talking about and I’m always happy to hear what a kid will eat because you younguns’ are usually pretty fussy. You’ve got me sold. My new lodging is right down there on Salem Street so this’ll be the handiest place to buy victuals. Thank ye kindly son!”

When Maman’s turn came up, Monsieur Lemieux himself served her. “You’ve got a fine young garçon there Madame Rejean. He’s just landed me a new customer. He should get a cut in my advertising budget. If he wants a summer job when he’s old enough, I’ll hire him. He and Paul can take over on a Saturday when I decide to treat my better half to a night out. Not that it happens much mind you. Here you are Madame, your beans with extra lard. The bread is on the house. It’s the least I can do today in endless gratitude for le Docteur’s devoted service and for your son building up my shop’s reputation. C’est pour vous et merci!”

Once outside Antoine asked his mother “Every single time we come here, Monsieur Lemieux tells everyone about Papa saving his son. Is he getting a little sick in the head Maman, because he repeats the same thing all the time. I don’t want to say anything because I wanna buy his food but doesn’t he remember he already told us? It’s kinda embarrassing cuz I’m sure Madame Roussette heard it a million times. Why is that Maman? Is that what happens when you get old? But he doesn’t look old at all!” Maman’s soulful eyes looked down on her inquisitive son. She didn’t respond and he didn’t insist. Blanche knew that none of them ever tired of hearing young Paul’s story.

Five satisfied Rejean customers left the modest grocery store eager to sample the Lemieux specialties. Antoine, carefully carrying two quarts of baked beans commented, “these cartons are kinda hot Maman. But don’t worry. I won’t drop’em. Can I please sit in the front seat cuz I’ll have more room to hold the beans. If I have to be squeezed in the back, the babies could make me spill them.”

“I’m not a baby any more Antoine! Maman, Antoine said I was a baby and that’s not true!” Maggie was not pleased with the demeaning epithet. Byron didn’t bother to add anything.

Blanche, figuring that her mother was tired of mediating sibling spats, spoke up. “I don’t mind sitting in the back Maman. Antoine wants to be extra careful with those hot beans. This is such a great Thanksgiving vacation with special treats every single day. All we can say is merci Maman!”

Maggie added “I’m holding the two breads and I don’t want to squish’em so Byron, don’t sit next to me, OK?”

“Why would I squish the breads?” Byron responded. “I just want to get home fast and eat’em. Blanche’ll sit on the bump in the middle. She doesn’t mind, right Blanche?”

Blanche nodded and everyone made themselves comfortable. Antoine, looking princely in the front seat, asked the driver, “Maman can I put the radio on please?” Without waiting for permission, he turned the button to Gerry and the Pacemakers singing “ ‘Cause this land’s the place I love. And here I’ll stay. And here I’ll stay. Here I’ll stay.” Blanche had heard the song at C’s house just an hour before but the lyrics hadn’t struck her. Now they did.