Straw-colored twine secured the last box of Monsieur Dubé’s books. As soon as Blanche pulled on its lopsided bow, the top eased open and dust bunnies took flight like little genies happy to be released from confinement. Blanche watched them circle, illumined by rays of sun from a far-off window. They danced to their own inaudible waltz before gently landing on a shelf or on the polished floor.

“I guess I’ll have to volunteer to dust the whole library when I’m done with the boxes” Blanche told herself. “Worth the hassle if it can keep me here. Let’s get goin’.”

The contents had been dumped inside pell-mell. “No way would Sister Gerald think this is ‘orderly’ “, she assessed. “Wow, whoever filled this box didn’t care about these books. Big ones crushing small ones, cracking covers and folding pages. What a lousy job! Gotta be extra careful but has to be done now if I wanna get to the treasure chest.”

One by one, Blanche removed the books, classics mostly. There was Ralph Waldo Emerson’s “The American Scholar” in pamphlet form. She remembered visiting his home during a family outing to Concord.

The first in time and the first in importance of the influences upon the mind is that of nature. Every day, the sun; and, after sunset, night and her stars. Ever the winds blow; ever the grass grows. Every day, men and women, conversing, beholding and beholden. The scholar must needs stand wistful and admiring before this great spectacle. (1)

“This guy must have communicated with the Pennacooks. I’ll have to check that out” she decided. 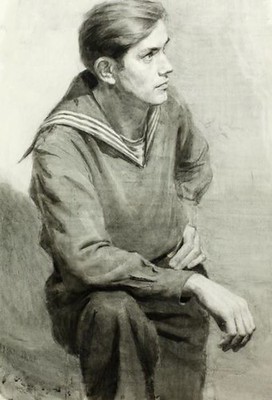 The next book was a first edition of Herman Melville’s “Billy Budd”. “I’ve only read ’Moby Dick’. Let’s see.” A paragraph caught her eye as she skimmed.

He was young; and despite his all but fully developed frame, in aspect looked even younger than he really was, owing to a lingering adolescent expression in the as yet smooth face all but feminine in purity of natural complexion but where, thanks to his seagoing, the lily was quite suppressed and the rose had some ado visibly to flush through the tan. (2)

“I wonder if Titi knows any ‘seagoing’ people. This one sounds kinda cute. I’ll have to put this on my reading list. 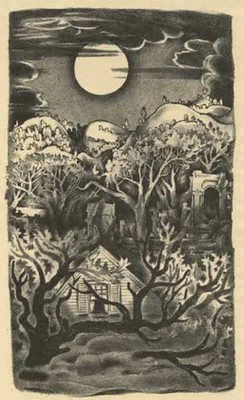 At midnight, in the month of June,

I stand beneath the mystic moon.

Exhales from out her golden rim,

And, softly dripping, drop by drop,

Upon the quiet mountain too,

Into the universal valley. (3)

“Titi and I will have to plan on going up to the roof as soon as Spring comes. I’m not afraid to get into trouble cuz maybe I’ll get library duty again” she mused.

He rushed down, and in an instant was standing before the bright and loving eyes of Beatrice. A moment ago his wrath and despair had been so fierce that he could have desired nothing so much as to wither her by a glance…. (4)

“Talk about a dirty look! Yeah, when I think of it, the headmistress can ‘wither’ us ‘by a glance’ too. But I guess this is a different kind of glance.”

She rummaged through the pile. Jack London’s “To build a fire” caught her attention. “Good advice for marshmallow roasting at the lake. The grown-ups don’t allow us to hang around fires alone but we’re adults now so we have to know this stuff.”

…tangled in the underbrush about the trunks of several small spruce trees, was a high-water deposit of dry firewood – sticks and twigs, principally, but also larger portions of seasoned branches and fine dry last year’s grasses. He drew down several large pieces on top of the snow. This served for a foundation and prevented the young flame from drowning itself in the snow it otherwise would melt. The flame he got by touching a match to a small shred of birch bark that he took from his pocket. This burned even more readily than paper. Placing it on the foundation, he fed the young flame with wisps of dry grass and the tiniest dry twigs. (5)

Blanche was absorbed in thought. “The lake in winter is as great as it is in summer – tobogganing down the hill onto the ice, skating, ice fishing without getting a single bite let alone catch anything. Frozen heaven, that’s what it is. I can’t stop daydreaming. These books are preventing me from finishing my job. OK, next. Cool! A couple of women writers for a change.”

Blanche picked up “The Novels and Stories of Willa Cather”.

Well, it was a nice snowstorm; a fine sight to see the snow falling so quietly and graciously over so much open country. On his cap and shoulders, on the horses’ backs and manes, light, delicate, mysterious it fell; and with it a dry cool fragrance was released into the air. It meant rest for vegetation and men and beasts, for the ground itself; a season of long nights for sleep, leisurely breakfasts, peace by the fire. (6)

She concluded “I like looking at snowstorms, especially in class, even though it annoys the teachers. Don’t they understand that watching snow fall during a test can help you remember stuff and concentrate? Teachers were students once too. But that was too long ago and they don’t get it anymore. They should become students again to see what it feels like. OK, a last woman writer. ‘A Curtain of Green and Other Stories’ by Eudora Welty.”

One summer morning when I was a child I lay on the sand after swimming in the small lake in the park. The sun beat down – it was almost noon. The water shone like steel, motionless except for the feathery curl behind a distant swimmer. (7)

“Summer, my favorite season. I can’t wait to go swimming again. And besides, I’ll be outa here. OK, I guess I’m an ignoramus cuz I’ve never read any Eudora Welty stories. ‘Eudora’, that’s a nice name. Isn’t it the name of one of Maman’s aunts or cousins up in Québec? Most of them have names with an ‘A’: Lumina, Albina, Mérilda, Filomena, Carmela, Emma, Olivia, Victoria, Daniela, Josepha, Clara, Gloria, Anna. No Pamela’s though. And thank goodness there’s no ‘Blancha’ cuz it sounds really weird.”

She continued handling the books, all American authors, and finally got to the bottom of the box when Sister Claudette tip-toed beside her and pointed a thin, bent index which could have belonged to a witch. For Blanche however, she was the Fairy Godmother.

“It’s time. Off to class you go” the librarian said, finger poised in the dusty air.

2) “Billy Budd” by Herman Melville. Novella begun around 1886, left unfinished at Melville’s death in 1891 and not published until 1924. The first edition appeared as part of the Standard Edition.

6) “Obscure Destinies”. From the definitive edition of Willa Cather’s fiction – “The Novels and Stories of Willa Cather”, Library Edition 13 vols., 1937-1941.

Reach Chapter 39: I’m into something good