“I’m into something good.”

It was day three of her sentence and Blanche had already spent nine recreation periods in the library. Sister Claudette had acknowledged her cleaning skills and decided supervision was not required.

Blanche handled the old books with the utmost respect. After freeing them from their cardboard confinement, she caressed them with her chamois, making sure the soft cloth scooped up the smallest speck of dust. Then she carefully opened the leather-bound covers to capture any remaining grain of dirt. The librarian glanced at her from time to time. No severe look shot from Sister Claudette’s dark bespectacled eyes. Blanche’s gestures became automatic and soon, three of the four boxes were sorted out.

At the end of the ninth library session, Sister Claudette appeared impressed. “Well done Blanche. Only one box left. But you know, even if you finish before the end of the week, the headmistress’s sanction must be respected. What shall I have you do? Although it would be lovely, I can’t spend time chatting. Daily tasks summon me. Running a library is not just enjoying the company of books. I’ve got to prepare files for…. But I won’t tire you with a list of my responsibilities. I have an idea Blanche. While you tackle the last box, I shall allow you to browse. Of course, continue your careful dusting. But if you feel like reading a few excerpts, go right ahead. And, if time allows, I will open the trunk so you can clean that out as well. Do not talk about its contents, not even to Sister Gerald lest she interpret my act as leniency. This is not a criticism of my administrative superior. Not at all. Sister Gerald is obliged to act in a precautionary manner at all times and this prevents her from placing too much trust in students. I have watched you carefully these past days and my experience of human nature has allowed me to confirm that you are a young woman of confidence. Therefore, you will take charge of the trunk before it finds its final resting place in an obscure nook of the SFA attic. Just think Blanche, this week you’ve been working much like a curator tending to ancient works of art. Isn’t it wonderful? Oh my! Recreation is over. Go to class at once. See you this afternoon.”

Blanche gaped at the slight, hunch-backed, near-sighted nun in her seventies, the keeper of a booty she was eager to share with an enthusiastic adolescent. Two minds joined over a pure and simple pleasure, the love of books. Blanche had a new friend.

With twinkling eyes worthy of the constellations in the night sky, Blanche blurted “Oh yes, thank you Sister. These books are so beautiful and I was so happy to dust their covers to make them look nice for the shelves. I felt like skimming through all of them for sure. But I wanted to get the work done since I was so slow at the beginning. I’ll take a peek at the last ones. And don’t worry, I won’t say anything about the trunk. I don’t really talk to Sister Gerald anyway. And my friends don’t understand why I haven’t been down in the dumps about missing recreation. They’re wondering why I haven’t been complaining about my punishment. In fact this hasn’t been a punishment at all and if you ever need a helper, please think of me because this place is wonderful. Thank you so much Sister. I have been so worried about my Papa but I know he’ll get better. He loves books too and….”

Before Blanche could say another word Sister Claudette rose from her worn-out armchair and pointed to the door with a yellow-toothed smile. “You don’t want to risk a sanction due to tardiness mon enfant. It may not be library duty next time. Go this instant!” 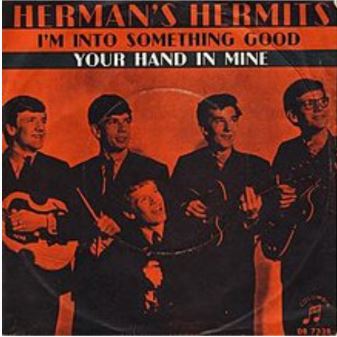 Blanche skipped out the door, hurried down the hall and took the stairs two steps at a time. No, she wouldn’t be late for class. She wanted to shout out loud but silence in the halls was part of  “orderliness”. A Herman’s Hermits refrain came to mind. She hummed “somethin’ tells me I’m into somethin’ good.”

During algebra class, encouraging news in the form of a note surreptitiously transmitted by C further lifted her spirits. “During her hospital shift, my Mom got to visit your father and he’s getting better and he’ll be able to go home soon. He told my Mom to tell me to tell you ‘je t’aime’ so please don’t worry. My Mom said the same thing the nuns always say – ‘God is good’. I guess they’re right. Right?”

C’s message made Blanche smile but she didn’t exchange glances with her friend because they both had to concentrate on new math concepts far more complex than the polynomials. Even so, each one knew that the other was pleased.

At meal time Blanche was too absent-minded to connect with her friends. They had given up harassing her for details on library duty but merely reiterated how lousy recreation deprivation must be. Blanche could not admit how far that was from the truth.

After swallowing a plateful of American chop suey and a spoonful of green jello, she took leave without dilly-dallying. “Gotta get through the last box of books now. See ya later!”

As if on cue, Titi and the others toodle-ooed with a “see ya later alligator, in a while crocodile.”

The library door was not locked when Blanche arrived. She entered, scanned the room for Sister Claudette and found her in a corner.

“There you are Blanche. Come. I’ve put Mr. Dubé’s trunk here and am about to take a peek inside. You will go tackle the last box now but tomorrow, when you have finished, you will know where to find the trunk. I’ll cover it with this old table cloth so it won’t attract any attention from the class of seniors who are about to spend time doing research for a term paper.”

The librarian was sitting on a three-legged stool, the rustic wooden kind used when maids milked cows. Her tiny bent body resembled that of a girl eagerly about to fish in her mother’s chest of drawers.

“Very good Blanche. Get that last box done and remember, you may skim through a few texts if you like, as long as you finish today.” Sister Claudette pointed towards the other end of the room, much to Blanche’s disappointment. She wanted to witness the opening of the mysterious trunk. However, she would have the pleasure of perusing more old books.