“Anywhere out of the world”

Blanche’s head was in the moon during classes. Lively dining hall conversations failed to pierce through the stupor. Friends gave up commenting on her lethargy as they watched her swallow the “plat du jour” of alphabet soup and ham salad sandwiches.

C tenderly addressed Blanche. “My Mom visited your Papa again yesterday and said you shouldn’t worry because Christmas vacation is coming and you’ll be together again to exchange presents and eat good food and sing Noël songs and all that fun stuff. PF, how about coming over my house again like you did at Thanksgiving? We can bake Christmas cookies and decorate them with green and red sprinkles and…. Hey PF, are you even listening? Things are looking up and your punishment is almost finished so don’t look so….”

Andy butted in. “ ‘Droopy’ is the word you’re looking for C. PF looks droopy. Her eyes are glassy from checking out too many books. Her mouth is mushy from lack of blabbing with her friends. Her body is sagging. Soon she’ll look as floppy as Sister Claudette. Let’s leave PF alone for now. She’s gotta get this punishment over with and then she’ll get back to her normal annoying self.”

Andy’s words removed Blanche from her torpor like an electric shock. “I’m not ‘droopy’. I’m just thinking about what I have to do in the library is all. You guys don’t get it. No use explaining. And don’t say anything mean about Sister Claudette. She’s cool, really interesting, knows all kinds of things about writers and…. Oh forget about it. I gotta go. One more box to empty and then….” Blanche cut her sentence short realizing she was about to mention the mysterious chest. “Yeah, I’ll be able to go to recreation again and….See you guys later. And thanks C for the news about Papa. I’ve been praying really hard. That’s why I look ‘droopy’. I can’t jump for joy all the time right now can I? See ya later.”

Titi chimed in “alligator! Your father is getting better and your punishment is almost over so that deserves a smile don’t it? We’re sending you good vibes kiddo.”

Blanche took her leave and bolted up the stairs.

A group of seniors, each carrying an orange cardboard folder, were silently filing into the library with heads up, shoulders back and eyes aimed at the card tables Sister Claudette had placed in front of the book stacks. “Take a seat girls. Open your folders and consult the list of references for your term papers.” Blanche was amazed at how the librarian could whisper so intelligibly. The students followed instructions and, in a synchronized choreography, turned their gazes from the diminutive nun to their papers.

Sister Claudette then faced Blanche with jutted jaw and raised eyebrows. The signal was – “What are you waiting for? You know what to do next!” The message was clear making Blanche conclude the nuns used sign language too.

She tip-toed to the last box, still open and smelling of dusty old leather. There were only two books left. The pirate chest would remain hidden while the seniors were in the library. She settled cross-legged in a corner to discover as many pages as possible. 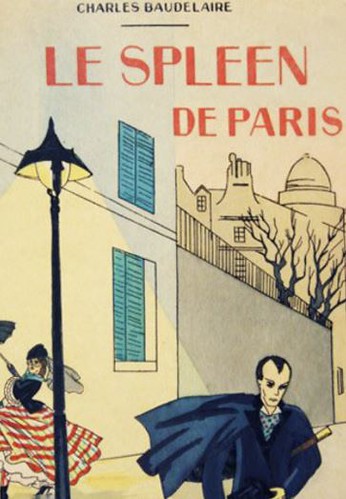 “ ‘Le Spleen de Paris’, Charles Baudelaire. The spleen is the yucky little reddish organ C found when we dissected that poor frog. Humans have them too. I heard Papa talk about someone who fell off a ladder and ruptured his spleen. Is this a medical book? Weird. None of Papa’s books has a cover with a guy in a cape walking down a Paris street. Do people get sick spleens there from drinking too much wine or eating too many pâtisseries or….” A title caught her attention as she turned the pages. “ ‘ Anywhere out of the world’. That’s pretty neat. Let’s see.”

(This life is a hospital where each sick person is possessed with the desire to change beds. This one would like to suffer in front of the stove, and that one believes that he would heal beside the window.

It seems to me that I would always feel well there where I am not….)

“Phew! What a way to describe life! I think the last place you’d want to be is in a hospital although many people end up there. I hope Papa gets out soon. Hum… Who wants to suffer in front of stove or a window or anywhere at all? What a strange thing to say. A window is always good though. You can see outside and maybe have a view of trees and hear birds. It’s like when I don’t wanna be in study hall and looking outside makes me feel better. Yeah, windows are good except when you have to wash them. But then everything is so bright and cheery when they’re clean. Maman wipes them with stinky ammonia and old newspapers. I never understood how that worked…. And why does Charles Baudelaire say he always feels better in the place where he is not? That means he never feels good anywhere because if he’s in one spot he can’t be in another one at the same time, right? Unless he bilocates like in science fiction or something. I’ll have to ask Sister Lucienne to explain. I remember her telling us he was the one who translated Edgar Allan Poe into French and did such a great job that everyone in France became wild about Poe. And these poets used opium and stuff which did a job on their heads. Then Sister stopped talking about that because she didn’t want us to get any weird ideas. Yeah and then she made us promise not to mention it, ever. Anyway, these ‘little prose poems’ are kinda depressing. I totally get wishing you could be someplace else. I sure felt that way here at boarding school. But I’ve had some good times too and I’ve learned a lot of new things. I’m not gonna read the rest of this right now. Too sad. OK,  here’s one called ‘L’étranger’, the stranger. Isn’t there a French novel with the same title? Sister Lucienne talked about it. Who wrote it again Alfred Camou? No, that’s not it. Oh yeah, Albert Camus.(2) Maman read it and told me how he was born in Algeria when it was still French territory and never knew his father killed during World War 1 and he grew up in dire conditions and worked really hard, got scholarships, held all kinds of jobs, started writing newspaper articles then plays and novels and ended up being the second youngest Noble Prize winner ever. Yeah, Maman and her stories about people who overcame the worst obstacles. Talking about real people gets the message across better than preaching she says. That’s for sure. OK what does Baudelaire say about this stranger?

(- Who do you love most, enigmatic man, tell me? your father, your mother, your sister or your brother?

“I love clouds too, especially watching them turn all kinds of colors during sunset. And I have the best seat in study hall to watch them. But what a sad life this stranger has if he doesn’t love anyone in his family and if he doesn’t love his friends. I love my friends and I couldn’t stand being here if I didn’t have them. They’re the best part of boarding school. And the stranger doesn’t even love his homeland. I love mine. Sure I’d like to travel around the world one day like Phileas Fogg but this is a great place to be for starters. Boy, Charles Baudelaire makes me think of too many sad things right now. I’ll have to tell Sister Lucienne that I prefer Paul Verlaine. OK, what’s this last book. Oh cool, Paul Verlaine! I really liked how Sister talked about ‘Chanson d’automne’ in class. ‘Les sanglots longs des violons….’ Let’s see how these are.”

Blanche thought. “We haven’t read any love poems in French class or in English class either for that matter. And I’ve never had dreams like this so I don’t really get it. What happens at the end?”

(Is she brunette, blonde or redhead? – I don’t know.
Her name? I remember that it is soft and sonorous
Like those of the loved ones Life has exiled.)

Blanche was perplexed. “Does ‘Life has exiled’ mean you die or something? Or else maybe he is just talking about dreams where everything is vague and you only remember sweet sounds and fuzzy shadows. At least his ‘familiar dream’ isn’t a nightmare. Nice poem with simple words. Well, now my job is done! I wish I could do it all over again, even the dusting. The books look grateful to be out of those dark old boxes and turning their pages is like helping them stretch their arms and legs and to get ready to travel through the hands of all the future readers.”

A loud rhythmical click, click, click, click of heels jolted Blanche out of her musings. The seniors, each carrying an orange cardboard folder, were filing out of the library under the watchful eye of Sister Claudette. A quick turn of the nun’s head signaled Blanche to follow. Reluctantly she did. Switching her mind to algebra mode wasn’t easy. All she could think of was the last lap of her library duty. It would be the most exciting of all.