Ch. 43 “Why don’t they go and create something”

Blanche was used to taking on responsibility. Whenever tension threatened the home front, Maman trumpeted “tu dois montrer l’exemple à tes frères et à ta soeur” (you must show the example to your brothers and to your sister). The call of duty, wrapped in obedience and bound with respect, was the eldest child’s privilege.

The crisp tap, tap, tap of Sister Claudette’s shoes faded as she slammed the library door behind her. Blanche was alone with the eleven remaining books. She read the titles on the parchment and felt a sweets-between-meals high.

“Number one, ‘The Town and the City’ with a tricolor ribbon.

Yellow is number two, ‘The Catcher in the Rye’.

Three, red, D.H. Laurence, ‘Lady Chatterly’s Lover’ “. (1) She picked up the volume as if it were a forbidden fruit but refrained from taking a bite. The clock was ticking and dawdling was out of the question. “I’ll skim through this later. Sister will not be pleased if I get nothing accomplished.” 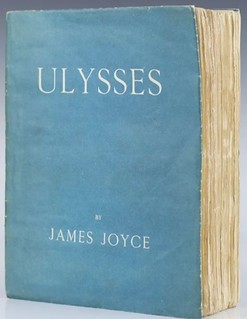 “Four, green, ‘Ulysses’, James Joyce. (2) Yeah I know him, a Greek mythology hero. What can be dangerous about reading that? Pretty thick book, 730 pages. It’d sure take me awhile to get through it. I should sign up for that speed reading course the English teacher was talking about. Doesn’t sound like much fun though. I’d rather think about the words, taste them in my head. That’s the best part of reading.

Next. Pink, ’Lolita’ by Vladimir Nabokov. (3) Wonder what that’s about? Sounds like a name for a kid’s doll.

Six, gold, ‘The Tragic History of the Life and Death of Doctor Faustus’ by Christopher Marlowe’ ”. (4) Blanche flipped through the pages. “Oh cool, a play. Wonder if Papa’s read this? It’s about a doctor so… Can’t let myself dilly-dally. Seven more books to go.

Grey ribbon for number seven, Edna O’Brien, ‘The Country Girls’. (5) That can’t be so horrible. I wonder what adventures these girls had?

Number nine, brown for William Burrough’s ‘The Naked Lunch’. (7) Maybe this is about a nudist colony or something like that. That can be shocking, especially for people who think mini-skirts are indecent. At least they cover your rear end.

‘Howl and Other Poems’ by Allen Ginsburg (8) with a tan-colored bow. I love poetry. I wonder if this is as great as Poe or Verlaine? Maybe these poems make people howl with laughter. What can be wrong with that? This list is getting more and more confusing.

Number eleven, purple, ‘Lysistrata’ by Aristophanes. (9) First a book about Ulysses and now Aristophanes. I guess Monsieur Dubé had a penchant for the ancient Greeks. Anyway, he liked a lot of different stories when you stop to think about it.

Last but not least, a black bow for ‘La philosophie dans le boudoir’ by Donatien Alphonse François de Sade. (11) A nasty French book maybe? I remember Andy saying recreation deprivation was ‘sadistic’ and she laughed at me when I didn’t know what the word meant and then she said it came from some French writer who wrote about people enjoying making others suffer. This must be the guy. OK, I understand how this could be forbidden reading for high school kids.”

Blanche gathered the ribbons and put them in a bag then folded the faded tissue paper before placing it in the trash. She delicately wiped each of Monsieur Dubé’s volumes and scoured the chest inside and out with an extra dose of elbow grease. Its rows of brass nails and scratched warped lock caught the late morning rays streaming through the book stacks. The young charwoman felt unexpected satisfaction, almost delectation, at contemplating the old metal sparkle.

“I’m beginning to understand how Ma Tante Lucie gets into housecleaning. Sweeping and scrubbing and picking up and putting things away never tire her. ‘J’aime frotter’ (I love scrubbing) she always says while going through the house like a tornado. When the job is done she inspects every single corner of every single room. That’s when she looks the happiest, with hair slipping out of that old faded kerchief and bright pink cheeks all wet with sweat. Yup, I’ll have to tell her I understand now.”

Blanche stepped out to the side balcony to shake the dust from the multicoloured ribbons, returned to the chest and began placing the thirteen books into their final resting place. The clock on the library wall indicated a quarter of an hour left before class, plenty of time to turn a few pages.

She chose ‘Lady Chatterly’s Lover’ first. Titi had often spoken about the thrill of having lovers and how her entire Christmas vacation would be aimed at achieving that goal especially since Thanksgiving had been such a flop. That kind of goal never crossed Blanche’s mind. She had better things to do like practice her skateboarding if the driveway wasn’t icy and taking bike rides all over the neighbourhood. But who was this Lady Chatterly? She opened the book at a random page.

Perhaps only people who are capable of real togetherness have that look of being alone in the universe. The others have a certain stickiness, they stick to the mass.

“Sounds a little like Baudelaire who loved clouds instead of family, friends and homeland. Maybe this lady is just unhappy. Who knows?” Blanche concluded.

She picked up the Sade.

(Everything is good when it is excessive…. Cruelty, very far from being a vice, is the first feeling that nature imprints upon us; the child breaks his rattle…far before having the age of reason.) (12)

“I’m not so sure about that” she thought.  “I don’t agree with the cruelty part. Maggie never broke her rattle or any of her toys for that matter. She did rip a leg off of my old Barbie but that doesn’t count. And I don’t know about things being good when they’re excessive. When I ate that whole bag of Canada mints stashed in Papa’s closet I got sick as a dog and I never tried to find his candy hiding places ever again.”

Blanche was continuing to arrange the books in an orderly manner even though Sister Gerald would never inspect this special trunk.

Sister Claudette appeared at her side with a Chechire Cat grin and announced “Sister Théophile did not hesitate to grant me your services for another period although she found you washed out and insisted that fresh air be required before the Noël break. Returning home as pale as a specter would do nothing for your father’s recovery, she said. He has returned home and is resting nicely you know. Good news across the board ma fille.”

Blanche’s heart jolted. A feeble “thank you Sister” escaped from her lips. 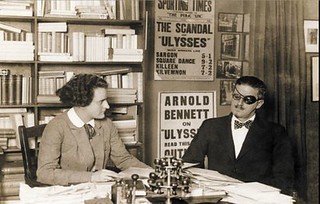 The librarian continued with enthusiasm. “What a superb job you have done Blanche! C’est très bien. Oh my, oh my, a first edition of ‘Ulysses’!” Sister lifted the thick volume reverently as if it had been a relic. 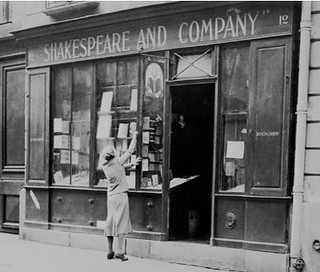 “This book was banned in Ireland and ended up being published in Paris would you know. Quite an amazing narrative about Leopold Bloom’s appointments on an ordinary June day in Dublin, the 16th in 1904. It is a modern parallel of Homer’s Odyssey and is regarded as a masterpiece. Many readers find it tedious if not impossible to read. But let me find you Molly Bloom’s soliloquy to give you a feel for the text. Plunging into the author’s words is far more exhilarating than listening to someone else’s analyses.”

In a flash, Sister found the desired passage and, in a single breath, read:

“Astounding isn’t it?” she commented, her face beaming from within. Before a bewildered Blanche could utter a word, the librarian looked at the clock. “Mon dou il est l’heure. Vite! (My goodness it is time, quickly). Go to class now and see you tomorrow. And remember, never a word about this trunk.”

Blanche executed the order. Before exiting the now beloved library, she looked back to the tableau of a frail, hunchbacked, bespectacled nun cantillating words from a thick wedgewood-blue covered book.

1 )“Lady Chatterly’s Lover” by D.H. Laurence. Published in a limited English-language edition at Tipografia Giuntina Florence Italy in 1928 and in Paris in 1929. First published in England in an expurgated version in 1932.

2) “Ulysses” by James Joyce. First serialised in part in the American journal “The Little Review” from March 1918 to December 1920. Published in Paris at Shakespeare and Company by Sylvia Beach on February 2nd 1922 on Joyce’s 40th birthday.

3) “Lolita” by Vladimir Nabokov. First printed in 1955 by Olympia Press, a Paris-based publisher launched in 1953.

4) “The tragic History of the Life and Death of Doctor Faustus” by Christopher Marlowe. Originally published in England in 1604. Washington Square Press, New York, 1965.

9) “Lysistrata” by Aristophanes, shown in 411 BCE at the Lenaea festival in Athens. Chandler, San Francisco, 1961.