Desk inspection replaced morning chores the Saturday before Thanksgiving. Blanche and her classmates welcomed the shake-up in the schedule and felt confident that Madeleine’s tidying techniques would serve them well.

“Girls, Sister Gerald will soon join us. We want to impress her with our orderliness. I would like to thank the upperclassmen for mentoring the freshmen last evening. A special mention for Madeleine who supervised several of you. This is a most eloquent example of team spirit. An individual is stronger when working within a unified team because each member’s efforts are enhanced. We all have our personalities, strengths, weaknesses, talents and foibles. But we can find support within an efficient team. ‘Unus pro omnibus, omnes pro uno’. You Latin scholars know ‘one for all, all for one’, made famous by French writer Alexandre Dumas in his 1844 novel ‘The Three Musketeers’. Some of you master the language enough to read the original French. An excellent book full of adventure and suspense. You may speak quietly now as we wait for Sister Gerald.”

“Yeah sure. ‘One for all, all for one and every man for himself’. I get the picture. I love Sister Rog but sometimes she’s just too damn naive about life. Goes to show you that this place really cuts you off from the real world.” Andy quipped. Blanche noticed that she never missed a chance to offer an unsolicited observation. 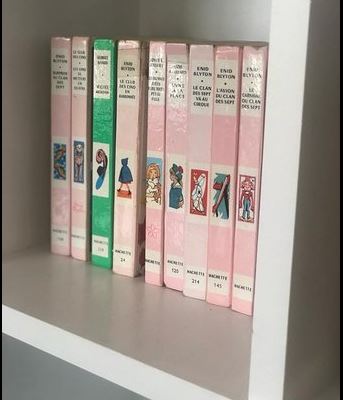 “I like how Sister Roger talks about all kinds of interesting things. I know that book. It’s in my father’s den, the original version from his college days at Assumption in Worcester where a lot of professors from Canada, France and Belgium taught in French. I’ve read French kids’ stories from ‘La Bibliothèque Rose’. But they’re for 10-year-olds and I’m ready for adult stuff now.”

Blanche was thinking about her children’s books. “My mother brought us to this shop in Cambridge with books in a lot of different languages and I got lost in there. It was fun. So many things to see! Then we walked around town and…” 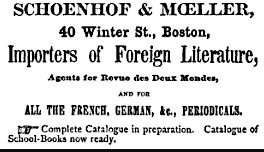 Andy interrupted. “The shop is called Schoenhof’s. Yeah man, neat place. Been there with my father.” She seemed to want to talk about her own experiences but Sister Roger’s raised hand signaled for silence.

Sister Gerald entered the study hall and positioned herself in the front. The first rows were occupied by underclassmen and Blanche felt lucky to be by the window at the far end. She felt a lump in her throat and didn’t understand why examining the contents of desks had to be such a big production. Sister, wearing a pair of white gloves, sure looked like she meant business.

Titi leaned towards Blanche and whispered, “We’re in for the dust test. She’s gonna slide her fingers all over the place and if a speck sticks to the glove, we’re in trouble.”

“Please lift the desk lid as I approach”, Sister Gerald ordered. “I may request that you display the content of your folders or the condition of your books. I hope you are using bookmarks as we instructed at the beginning of the school year. Earmarking disfigures school material and will not be tolerated.”

The inspection proceeded as Titi forecast with Sister carefully sliding her fingers inside and outside every desk after manipulating its contents.

“Rose, you’ve got partially torn pages in some of your textbooks. I cannot grasp your neglect in caring for SFA property. I shall have to ask your parents to reimburse all soiled or damaged goods.”

Rose, a dainty-looking freshman who often exhibited her thorns blurted, “Why Sister, the day you distributed the textbooks, you signed a paper stating I was not responsible for their shabbiness. When I asked for new ones you said ‘no’ and then you told me you would keep a note in my file as a reminder not to bill me because it wasn’t my fault.”

Blanche admired how Rose defended herself. “I should hang around with Rose”, she thought. “She’s as strong as Andy but less sarcastic. But I don’t really like her friends so maybe I’ll just stick to my own group.”

Sister Gerald often told the girls that she had an elephant’s memory. “Yes indeed Rose, I recall that. Your used books merely gave me the opportunity to reiterate that each student is responsible for the material entrusted to her. Your desk is in satisfactory order Rose. You may close it now.”

The morning’s procedure was tedious and Blanche’s heart thumped a bit harder with each inspection. Sister Gerald picked up on every detail. Denise had stuffed too many loose leaf sheets into her folder making it bulge. Lorraine had not properly piled her books inside her desk. Clarisse had left pencil shavings inside. A brief “Mmm, mmm” followed by a slight nod indicated that Paula, Janet and Rachel had successfully passed inspection. They all let out an audible sigh as Sister headed to the following desks.

Next in line were Andy and Titi who passed the white glove test with flying colors. “Andrea and Yvette, I commend you for meeting our standard of orderliness. Keep it up.” Madeleine flashed a smile at her protégées and gave them a thumbs up.

It was Blanche’s turn. Her apprehension eased as she told herself, “I followed Madeleine’s suggestions so I have nothing to worry about” She lifted the lid. Something flashy had been placed on top of the drab textbooks – the “Seventeen” magazine.

Sister froze as if she had become a pillar of salt and Blanche saw her pupils turn into pinpoints. The seconds that followed were like the lull before a storm.

“Blanche Rejean, what is the meaning of this?”, Sister screeched and lifted the magazine away from her face with her left thumb and forefinger as if it had been a soiled diaper. She slammed the desk shut with a flick of her right hand and placed the magazine on top.

“I am horrified. How could you bring such a thing into our respectable institution? These images, these articles, these advertisements… there is absolutely nothing inspiring here, nothing to uplift you and help you grow as a young woman of unquestionable morality.”

Blanche wondered why Sister continued to examine every single page if the magazine was so offensive.

“I am flabbergasted to find this in your desk. Your mother did not bring you up this way. And have you thought about your father? Why, seeing this among your textbooks would provoke another heart attack. How mistaken I was to think you could contribute to SFA’s fine reputation. Introducing such vileness into our ranks warrants immediate sanction!”

Sister’s rant came to an end because she had to catch her breath. She proceeded to turn each page into colorful confetti which covered the desk like severed butterfly wings. Some of them fell to the floor. Blanche bent to pick them up and was compelled to say something.

“Sister, my mother gave me this magazine the Saturday she came to visit with my little sister. You spoke to her for awhile and you were very nice to Marguerite and told her that she was welcome to come study here and you forgave us when we came back to school late. I was very grateful Sister. And remember that Maman gave me a box of Mrs. Nelson’s candy which you allowed all of us to share. Thank you for that too.” Blanche’s voice came out flat and weak because she felt guilty about adopting the sugar and honey strategy to deal with the situation. She had been brought up to respect adults and that often meant refraining from comments of any kind. Bending that tacit rule was so foreign to her that it made her head spin.

“How dare you answer back to me young lady! I do not believe a word you are saying. I know your mother and I am certain that she would never allow you to waste your time on such trivial reading. Furthermore, Madam Rejean knows this nonsense can lead to no good. Do you really think lying will lighten your case when I inform the headmistress? Just look around you. Everyone is as horrified as I am.”

Speaking up had consumed all of Blanche’s courage so she didn’t dare take a look at her schoolmates.

“Blanche is telling the truth Sister. We saw her come into study hall that Saturday while we were reciting the rosary and we were all jealous because she had not got punished for tardiness. She slipped the magazine into her desk and I never saw her look at it again. She spends the whole study period doing homework and reviewing for tests. Just ask Sister Roger. She’ll tell you. Besides, Sister Roger saw the magazine and told us that it could give us ideas for our fashion show with Madam Greenwood. And anyway, what’s so scandalous about a couple of girls in Maidenform bras? Besides, all we ever wear are SFA uniforms so what’s the big deal?” Andy had never spoken up for anyone and Blanche was moved by her gumption. Then and there she knew that Andrea Tremblay would be a lifelong friend. Maybe she had gone a bit too far in the speech for the defence however.

“The ‘big deal’, as you say with such effrontery is the fact that both you and Blanche will forthwith direct yourselves to the headmistress’s office while I finish my inspection.” Sister’s face had become crimson, almost purple, and swelled like a balloon about to burst.

“But Sister, you didn’t even look inside PF’s, I mean Blanche’s desk? Hers is just as orderly as ours and….” Blanche knew Andy just couldn’t stop when she was on a roll.

“That will be enough Mademoiselle Tremblay. You are aggravating your case. Have I made myself clear? Now both of you, go.”

The two girls left the room and saw that Titi, with eyes like chandelier crystals catching the light, gave them a thumbs up behind Sister Gerald’s back.