The atmosphere during lunch was as icy as the showers. On the menu that day was French-Canadian cottage pie called “Pâté chinois” (Chinese Pâté). Blanche had never understood what was “Chinese” about a layer of ground beef topped with kernel corn and mashed potatoes. In any case it was comfort food and she concentrated on eating each ingredient and avoiding eye contact with Andy.

Titi had noticed Andy’s attempt at cheating during the algebra quiz. “That wasn’t so bad, don’t you think? Anyway, it’s only a quiz and Sister Amelia said she would drop the lowest mark at the end of the term before figuring out the report card grades. So it doesn’t even matter if we messed up.” She directed her comments to Andy in an effort to lessen the tension between her friends. No one chose to pursue the topic and the conversation changed course, once again with Titi at the helm.  “Remember that we’re going to see a movie tonight? It sure beats another prayer session.”

Andy decided to stop brooding. She had forgotten about the film and joined Titi in happy anticipation over a welcome change in the SFA schedule. “Yeah, I wonder what they’ll show us. Could be something like “The Song of Bernadette” with Jennifer Jones. It’s around twenty years old. I didn’t even know that the nuns were allowed to watch movies. But that one’s harmless. I’ve seen it. Wouldn’t it be cool if these nuns were trailblazers who expose their students to the cinema arts? I love movies. My father and I go all the time. He lies about my age so I can see other things besides Disney. During Thanksgiving weekend we’re gonna see Fellini’s latest release – ’Juliet of the Spirits’. My father’s a great guy. He’s a musician, a writer, an artist and he knows a ton of things. I really miss him. He understands me more than my Mom does and he gets it that I don’t feel like cleaning my room. Boy, if he saw me here, making my bed every morning, his jaw would drop.” Andy was rambling about her parents, something she had never done before.

Blanche was moved by Andy’s words and decided to barge in, “yeah, my Papa understands me more than my mother does and the two of us go to the movies sometimes and I really miss him too. Is that movie about Romeo and Juliet?”

Andy, surprised that Blanche talked to her after the quiz incident, quipped, “No, you IGNORAMUS! I’ll bet you’ve never even heard of Fellini. Yeah PF, maybe we have a few things in common but…”

Titi nipped the potential spat in the bud. “I thought Frankie Avalon was dreamy in ‘Beach Blanket Bingo’. Have you seen it? And Elvis in ‘Girl Happy’, that was good too. I’ll bet tonight’s movie will be ‘The Greatest Story Ever Told’. Our entertainment has to be ‘inspirational’ remember? Come to think of it, Frankie and Elvis can be VERY inspirational. I can imagine all kinds of scenes with me as the leading lady. Hihihi, haha!” A riff of Titi’s giggles dissipated the lingering bad vibes.

When the boarders heard that their gym teacher had chosen the evening’s feature they were thrilled. Sister Roger had her own approach to boarding school life, one that wasn’t only made of toil and sacrifice. She thought a bit of good clean fun was essential to an individual’s wellbeing. During gym classes, she enjoyed telling students how she had been a frequent movie-goer before joining the Sisters of the Cross. She talked about the ways actors boosted their stamina with calisthenics. She succeeded in getting everyone to move and even the most sluggish girls had fun in Sister Roger’s gym.

While demonstrating the proper form for lunges and squats, she announced that the school year’s first film would be in French. “Now girls, you know that part of our mission is promoting all things French-Canadian. That includes eating specialties like “Pâté chinois” and “Tourtière” pork pie. It’s also discovering history like the 1759 Québec City Plains of Abraham Battle and the origin of the Canadian national anthem, “O Canada”, composed by Calixa Lavallée. Most of you are French-Canadian immigrants’ grandchildren and your parents are pleased that we make an effort to expose you to our cultural heritage. Learning a bit about French cinema is another way to achieve this and our headmistress Sister Theophile entrusted me with the task of finding suitable films. After a fruitful exchange with cultural attaché Alain Chevalier, Boston’s French Consulate agreed to lend us films.”

During a series of jumping jacks, Sister talked about the young diplomat who happened to be Maurice’s cousin. When no one recognized the Chevalier name, Sister began to sing:

“Wonderful! Oh it’s wonderful
To be in love with you.
Beautiful, you’re so beautiful,
You haunt me all day through.
Every little breeze seems to whisper ‘Louise’.”

Suddenly, several of the girls remembered French crooner Maurice Chevalier and sang along. The five class “Louises” cringed and the gym echoed with such outbursts of joy that Sister Gerald hurried down to discover the cause of all the commotion.

“What is the meaning of this Sister Roger? Have you forgotten how to control your class? As we speak, there’s a Latin test upstairs and our students need to concentrate. I shall therefore ask you to cease this disorderly conduct. And may I also remind you that musical activities must occur in the appropriate rooms ONLY. The gym is NOT the place for singing. Now girls, I shall ask you to please proceed with your physical education class appropriately!”

Sister Gerald had publicly admonished her colleague. Yes, it was humiliating but Sister Roger was so eager to share her passion for cinema that she brushed it off. “Girls! Girls! We cannot deny that Sister Gerald is right. But, in order to enrich your cultural baggage, it’s interesting to know who Maurice Chevalier is and also to know that our special evening is linked to this great star through his young cousin. This is a sign from the Almighty Himself. We are in for a rare visual treat.”

Nothing could dampen her enthusiasm. To make sure she wouldn’t be sanctioned by the headmistress, the girls rallied around their teacher and exercised without a peep. While they touched their toes, swung their arms and jogged in place, Sister Roger gave them a summary of her conversation with Maurice’s relative. 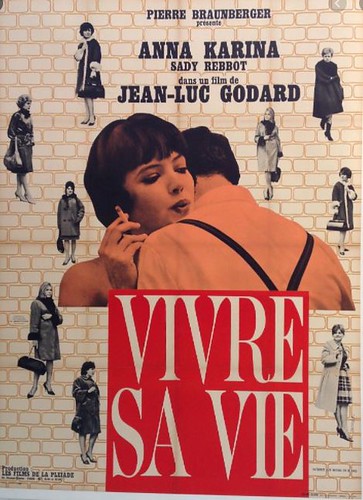 “I told him all about our academy and how we are striving to open our minds to our ancestors’ cultural legacy. After all, history makes French-Canadians and French people ‘cousins’.  The French cinema scene is world renowned and we are thrilled to collaborate with the Consulate. Monsieur Chevalier told me that Jean-Luc Godard’s 1962 production “Vivre sa vie” was a sample of the French New Wave movement and I thought all of you girls could appreciate a movie called “My Life to Live”. After all, part of our mission here is guiding you on life’s path. The cultural attaché didn’t give away the plot and I didn’t ask any questions. So tonight’s film will be a surprise because it arrived too late for me to preview. It’s so exciting, isn’t it?” Sister Roger turned all of the girls into future cinephiles as eager anticipation spread.