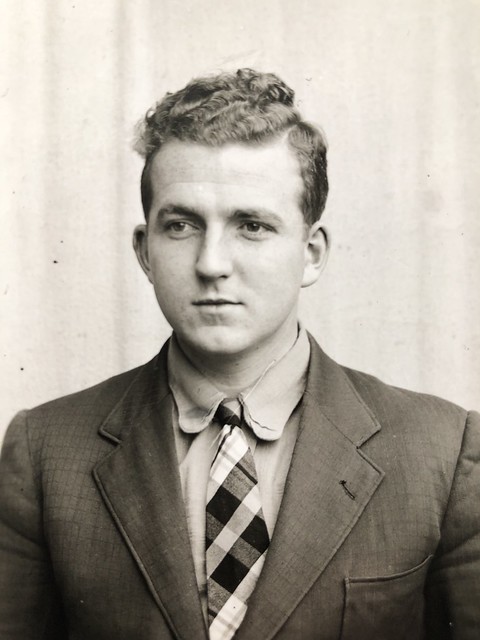 An American in Paris

On September 16, 1940, the US passed the Selective Service Act allowing the draft of eligible men for military service. Hence, Laval U. Peloquin, one of nine children born to French-Canadian immigrants Joseph and Marieanne, was plucked out of civilian life and deposited into the Army.

Laval was in his first semester at the Georgetown University School of Medicine in Washington D.C. on December 7, 1941, the day Pearl Harbor was attacked. All medical students were conscripted when the US declared war on Japan on December 8. As they would be of greater use with medical training, the students were allowed to remain in school with the rank of Second Lieutenant (sometimes called “butter bars” because their insignia resembled one and because they had, in the view of some, about the same value as a stick of butter). Laval completed his studies as a commissioned officer but was usually in civies.

During the first summer of medical school, he was sent to Fort Dix, New Jersey, for basic training, a new experience where medical students were given no slack. The drill sergeants strengthened the trainees, toughened them physically and knocked them down to better build them up. They were a special target for ridicule, harassment and other duties as assigned. Asking for a bathroom rather than a latrine earned the trainee a ration of grief.

Laval was an alumnus of Assumption Preparatory School followed by Assumption College in Worcester, Massachusetts. The Assumptionist brothers and priests, many from Europe, excelled in classical education, the basic sciences and discipline in the Biblical sense. Laval later recognized that this type of instruction, which did not spare the rod, helped him complete basic training. He did what was told, when told and as told. Daily reveille blasted the trainees awake before dawn, hustling them to get ready, to square away their bunks and foot lockers and to shout “Yes, drill sergeant.” The soldier was dressed down if a look of amusement or defiance crossed his face.

Laval was not in shape for basic training, but he made a consistent effort to follow instructions, keep a serious expression and behave as he was taught at Assumption Prep where corporal punishment existed even up to the time of its closing in 1970. He had learned that harsh discipline prepares a man for life’s challenges as well as for war.

Training included crawling through the mud under live machine gun fire, climbing tall walls and jumping down the other side, 20-mile hikes with full packs and C-rations. C-rations were given to the troops when fresh food was not available. These meals were calorie dense, consisting of a meat, a couple of biscuits that could be used as a blunt impact weapon or a hockey puck, an insipid dessert and a pack of cigarettes with matches. The latter was the favorite element of said banquet. Salt, lots of it, was the primary flavoring. A helping of grease was in the can for good measure and a full canteen of water enhanced the dining experience. These meals were not gourmet, but they kept one alive as Laval’s relatives in combat in North Africa and the South Pacific would later testify. Laval had a sensitive palate but would not criticize this offering from the taxpayer as he chose to avoid correction from the drill sergeant. Again, the protocol was remaining impassive, complying to injunctions, not volunteering one’s opinion but rather volunteering for harsh or extra duty to prove one’s mettle. After a while, Laval noticed that the drill sergeant ceased to choose him because other trainees seemed to require instruction more desperately.

Upon completion of medical school, Laval was assigned to a medical combat support unit in the South Pacific. His class graduated early as the military needed doctors. The war in Europe was winding down, and his services were required where fighting was still fierce.

He was granted a brief leave to return to Lowell to say goodbye to his family. His mother and sisters cried as he left. On the set date, his father Joseph drove him to the old train station in Worcester for his journey. The service men were well treated, with coffee, snacks and meals. At scheduled stops, the public was there to greet the soldiers, sailors and Marines with goodies and hugs. Laval was contemplating his adventure and the dangers therein.

In Chicago, Illinois, he was scheduled to do an “overnighter” in a government-provided accommodation. He reported to the Army liaison center at the train station for his orders. They had been changed. He was reassigned to Paris, France, with duties yet to be specified. He was booked to go to New York City for a ship bound for Europe two days later. That night, he got on a train to NYC and boarded his ship.

Upon arriving in France, Laval was sent to Paris. “The City of Lights” had been liberated on August 25, 1944, and the war was drawing to a close. When he reported to headquarters, he found out why they removed him from duty in the Pacific. He proceeded to Paris as a Second Lieutenant and, shortly thereafter, was promoted to First Lieutenant. At this rank, he was named chief venereal disease control officer.  A French speaker was de rigueur for the Army and Laval’s linguistic mastery met the requirements. This was no surprise as he had grown up in a Franco-American family where French was the household tongue.

Liberated Paris was very welcoming. Many young women wanted to personally express their appreciation for the Allied soldiers who gave them liberty. Some gave their affection freely, others did so for a fee. Penicillin, the brand-new miracle drug, was the exclusive property of the US military and was prescribed for serious or recreational infections. Laval’s job was to inspect the “social clubs” where many soldiers found comfort in Gallic arms and so he examined and treated the victims of amorous activities, be they women or soldiers.

Laval was assigned his own Jeep with all of the fuel he could consume. In a time of rationing, he could go where he wanted when he wanted. He was also designated as head of a military police squad complete with its own transportation truck. His men, some trained as medics, facilitated entrance into any home or establishment needing the services of the specialized unit. Usually, he was greeted cordially, as his mission allowed these businesses to safely operate. At other times, the squad would have to raid the oasis of comfort. He was welcomed throughout Paris as a liberator from “intimate irritations.”

As he toured the city, he practiced his other-than-medical talents. With his curly ginger hair, green eyes and pleasant features, Laval was handsome. He was also blessed with a beautiful singing voice, one that he had used to earn pin money while a medical student in Washington, D.C.  As he had done in the States, he sang in bistros but not for tips. In Paris, he received a good meal, a good drink and the opportunity to dance and sing with the city’s darlings like Montmartre’s singer-actress Patachou.

Certainly, the services Laval provided promoted the public health and welfare of Paris. As conservative parents learned of this “French” American doctor, he also found himself being invited for a home-cooked meal and an introduction to their treasures, i.e., their daughters. In such homes, the fathers watched this Army officer closely. Although he seemed nice, they would leave their daughters alone with no man.

It was in such a Gallic home that he received a special treat. Lamb stew, a wartime rarity, was on the menu. As guest of honor, Laval was served the most delectable pieces of lamb, the most succulent vegetables and small potatoes simmered in a delicately fragrant sauce. It was scrumptious. He ate heartily and engaged in friendly conversation with the patriarch of the house while being ogled by mother and demure daughter. As he chewed, he felt a rubbery item that he discreetly removed from his mouth and returned to his bowl. The host noticed and said, “What have you got there? Ah, it is the eyeball, the best part of the stew!” He dipped the ladle into the tureen and added, “Here is the other one, we saved it for you!” Later, during tales to his children about his Parisian experiences, Laval did not specify whether or not he ate the other or if he had ever dined there again. He did tell them that the young woman was quite attractive. Laval’s children do not know if he saw her again.

Just before returning home, he was promoted to Captain.

The year-and-a-half-long tour abroad allowed Laval to live with the French people he served. The suffering, the mourning, the healing, the renovating and the rebuilding, he encountered it all. The celebrating as well and always the singing. His honey-rich tenor rendered popular songs heard especially in the crowded smokey cabarets of La Butte Montmartre. As the years went by, the melodies of his youth never left him. On the contrary, they aged like vintage wine as he fine-tuned his interpretations. Years after his European military assignment, the songs continued to enliven his household and punctuate his tall but true military tales. (See “A kid’s soundtrack” posted on April 27, 2021).

Captain Laval U. Peloquin M.D. was a Titan, a man who lived a life of courage, adventure, leadership and faith. His was also a life of service to the city of Lowell, first as a general practitioner in his 322 Pawtucket Street office facing the Grotto, then as a board-certified surgeon and finally as a board-certified radiologist at Lowell’s Saint Joseph’s Hospital. He died on August 7, 1976, at age 56.