Many a Franco-American baby-boomer grew up hearing French in Lowell. “Le souper est prêt!” filled streets from Little Canada to the Highlands summoning “les enfants” to warm kitchens where a “pâté chinois” (cottage pie) or another hearty dish was waiting to be devoured.

For a time, some households remained linguistic islands, bits of Québec transplanted to “les États” (the States). I grew up in one of those. Without a doubt, language, in itself, is music. But here, I’d like to recall five French tunes from my childhood.

I lived in a two-family house in the Highlands, the eldest of four with five bilingual cousins on the second floor. “Fais dodo” was our mothers’ preferred lullaby. All of us learned the 18th-century French air about Maman upstairs baking a cake and Papa downstairs making hot chocolate. But the child about to sleep only got water! We never grasped how water could be more enticing than cake and chocolate but the way our mothers sang it made it great to hear.

“Les grands”, the eldest, relished teasing “les petits” by carolling “Fais dodo” to indicate that the sandman was coming for them at a ridiculously early hour. Maman and Tante Jeanne often shooed us away.

My second track is “J’irai la voir un jour”, a hymn to the Blessed Mother. In May – “the month of Mary” – our mothers would sing it daily. Our clear childish voices blended in for the refrain and turned the most mischievous into perfect choir members. I’m not entirely sure the display of fervor came from piety. We simply liked the pretty, easy tune. Even now, hearing it, most often at a funeral for a beloved departed Franco, brings me back to the days when Maman’s soprano and Tante Jeanne’s alto graced the large house.

Undoubtedly, the most haunting memories are linked to my father. During his schooling, he developed the smooth, full-throated tenor that graced many a musical and theatre production. Later, as a medical student, he occasionally sang at piano bars where his voice delighted patrons and allowed him to glean a bit of income.

The attack on Pearl Harbor was in 1941 during his first semester at Georgetown University School of Medicine and students were conscripted immediately after the USA declared war. Originally programmed for the Pacific, the Army finally decided on a destination where this young French-speaking physician could best put his skills to use – France. A month after the German capitulation, he was stationed in Paris.

Stories of Papa’s year and a half European tour are fascinating. The Paris music hall scene had never been silenced and discovering it triggered his thirst for popular melodies. He assimilated singers’ styles and mannerisms and, in future years, had great fun reproducing them for the eager family audience.

First “Les feuilles mortes”, a Jacques Prévert poem put to music by Joseph Kosma and recorded in 1949 by Yves Montand. We didn’t only hear it in the Fall when jumping into mountains of raked leaves was the thing to do. On Sundays, when Maman was preparing a special dinner, the melancholy melody filled the house with sounds as sweet as the apple pie baking in the oven. Papa was serenading Maman and sure enough, when we peeked into the kitchen, we saw them gazing into one another’s eyes, alone in their French musical universe. We never giggled lest we break the spell but remained on the sidelines like fans sneaked into a theatre without a ticket.

The falling leaves drift by the window,
the autumn leaves of red and gold.
I see your lips, the summer kisses,
the sun-burned hands I used to hold

Since you went away the days grow long
and soon I’ll hear old winter’s song.
But I miss you most of all my darling
when autumn leaves start to fall. 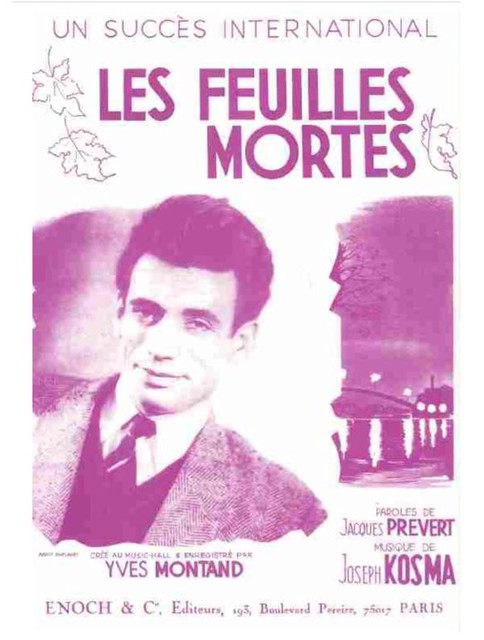 We sang the next air together, carefully articulating lyrics which made us long to become Poseidon’s children. “La Mer”, the classic 1946 hit, was written and recorded by French composer and showman Charles Trenet. With French scores from Schoenhof’s Foreign Books in Cambridge, my mother would accompany us at Grand-Mère’s flea market piano, always finely tuned for those destined to follow the footsteps of Vladimir Horowitz whom my parents had seen, or rather heard, at Symphony Hall. The beautiful antique piano was an important voice in our family ensemble. 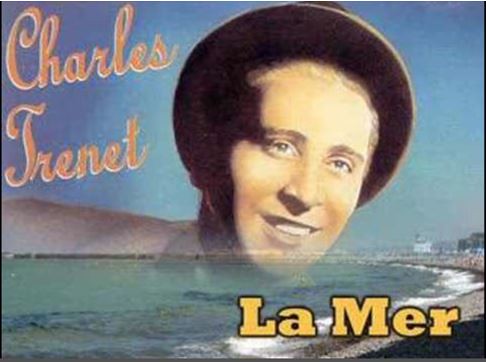 “La Mer” became an unexpected hit, was translated into countless languages and has remained a classic. Bobby Darin recorded the English version,“Beyond the Sea”, in 1959. It became his signature song.

Somewhere beyond the sea, somewhere waiting for me,

my lover stands on golden sands and watches the ships that go sailin’.

Somewhere beyond the sea, she’s there watching for me.

If I could fly like birds on high then straight to her arms I’d go sailing.

I know beyond a doubt my heart will lead me there soon.

We’ll meet beyond the shore. We’ll kiss just as before.

Happy we’ll be beyond the sea and never again I’ll go sailing.

Papa’s repertoire was extensive. These also were favorites.

– Patachou’s waltzing “Domino” whose lyrics – “J’ai le coeur comme une boîte à musique” (I have a heart like a music box.) suited him so.

– “Sous les ponts de Paris”, the popular 1913 song which became “Under the Bridges of Paris” and put Dean Martin on the charts in 1955.

During family gatherings, my father, along with his older sister Lucie, would give a dramatic rendition of Rina Ketty’s 1938 instant success “J’attendrai” (I will wait). When France was occupied in 1940, this love ballad became THE war song with the title interpreted as waiting for peace and liberation. “J’attendrai le jour et la nuit, j’attendrai toujours, ton retour.” (I will wait day and night, I will always wait for your return.)

My blast from the past will close with Édith Piaf’s “La vie en rose”, the 1945 love song which became our household serenade. It didn’t matter that the lyrics depicted a woman belonging to her man. For us, it was simply a musical message about how much we loved one another despite life’s inevitable spats and quarrels. I remember being sandwiched in collective bear hugs, belting out the finale – “Alors je sens en moi mon coeur qui bat.” (So I feel my heart beating inside me.) In those moments, all of our hearts beat in unison and life was indeed rosy. 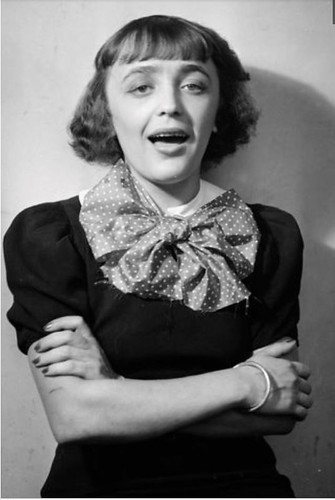 Hold me close and hold me fast,

the magic spell you cast,

this is la vie en rose.

When you kiss me, heaven sighs

and though I close my eyes

When you press me to your heart

I’m in a world apart,

a world where roses bloom.

And when you speak

angels sing from above.

seem to turn into love songs.

Give your heart and soul to me

and life will always be

Like everyone else’s, this kid’s soundtrack could make up dozens of LP’s, CD’s and playlists. Every tune still rings in our ears.

2 Responses to A Kid’s Soundtrack