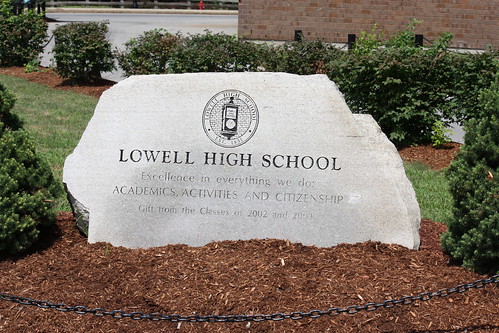 Two weeks ago, I wrote an article that explained how the various parcels that constitute the Cawley Stadium site were compiled. In this article, I do the same for the current Lowell High site. As is often the case with land records, a bit of history is helpful.

Founding of Lowell and Early Development

Two hundred years ago, the land that Lowell High sits upon today and almost all of downtown and the Acre were sparsely settled pastures and farmland. The few buildings that existed were mostly along the two rivers, the Merrimack and the Concord. The Pawtucket Canal was there, too, following the same route it takes today. It was dug in the 1790s as a transportation canal that allowed boats to bypass the Pawtucket Falls. But the Middlesex Canal, running from the vicinity of today’s Hadley Field all the way to Boston, had put the Pawtucket Canal out of business in the early 1800s.

In November, 1821, Patrick Tracy Jackson, Nathan Appleton, Kirk Boott, and others came to view the Pawtucket Falls to determine if the Merrimack River could generate sufficient hydro power to run the great textile manufacturing center they hoped to build. They concluded that it did, and quietly bought the rights to the canal and almost all the land within it and the two rivers.

As the mills grew, so did the city. When the founders bought the rights to the Pawtucket Canal, they actually bought the corporation that owned the canal, The Proprietors of the Locks and Canals on Merrimack River. The Locks and Canals, as the company came to be called, was the biggest land owner in the city. 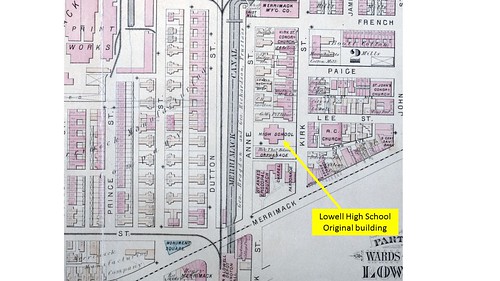 Lowell High School was founded in 1831 as the nation’s first co-educational and integrated public high school. For several years, it was housed in temporary locations.

On December 7, 1837, the Proprietors of the Locks and Canals conveyed a 19,000 square foot parcel between Kirk and Anne streets to the Inhabitants of the city of Lowell for $4,909.50 (Anne Street was the walkway of today’s Lucy Larcom Park). A school building was soon constructed on that site but it was demolished and replaced by another in 1892. That new building, which is still in use today and is known as Coburn Hall, was designed by Lowell architect Frederick Stickney (who also designed the city library). It was made of yellow brick and contained 20 classrooms for approximately 800 students and their 27 teachers. 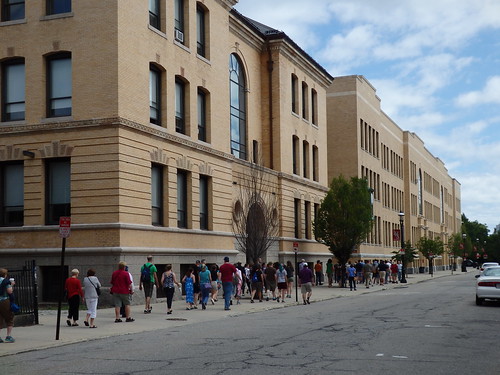 On October 15, 1915, the Lowell Municipal Council voted to take by eminent domain all of the land between Kirk and Anne streets from the existing high school to French Street. Taken were at least ten private homes, the Kirk Street Church (at the corner of Kirk and French streets), the Lowell Day Nursery, the Children’s Home of Lowell, and the Genoa Club (the early home of the Knights of Columbus, I believe). The addition that was constructed, commonly called the 1922 building, used the same yellow brick finish as Coburn Hall and took 2.5 years to construct. 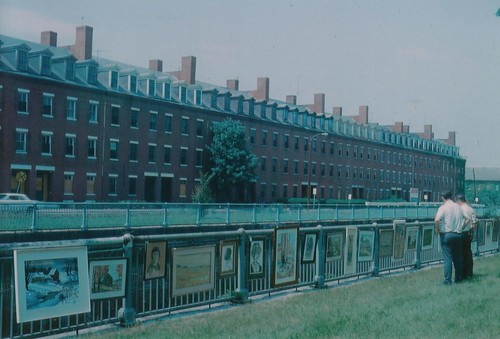 Today, Dutton Street seems to end at Merrimack with a small stub stretching across Merrimack to the front of Cobblestones Restaurant. Up until the mid-1970s, Dutton Street continued on, all the way to French Street. Way back in the 1820s, the Merrimack Manufacturing Company built worker housing on that part of Dutton, as shown in the photo above.

In 1968, as part of the Northern Canal Urban Renewal Project which had been underway since 1962, the City Development Authority took that portion of Dutton Street by eminent domain and demolished the worker housing to make way for “new industry.” 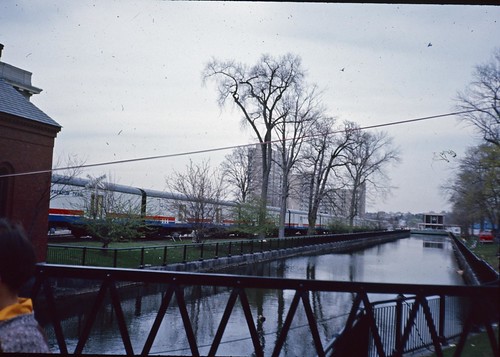 When that “new industry” failed to appear, the City Redevelopment Authority conveyed a large parcel at the corner of Arcand Drive and Fr. Morissette Boulevard (both roads newly added by the Urban Renewal project) to the city of Lowell for $1. The deed contained no restrictions on the use of this land. 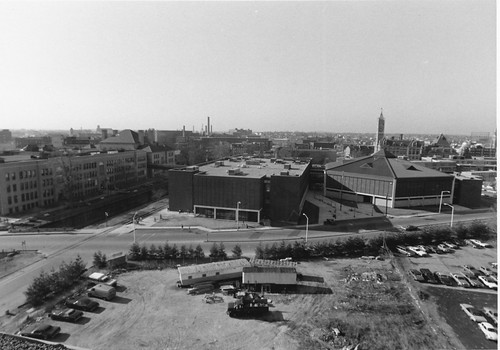 It was on this parcel that the city constructed a large addition to Lowell High School which became known as the “1980 Building” (referred to recently and officially as the “Lord Building”) along with an athletic field house. The total cost, I believe, was less than $20 million.

On March 27, 1980, the Proprietors of the Locks and Canals on the Merrimack River conveyed to the city an easement “for the purpose of installation, construction, maintenance and repair of an overhead pedestrian bridge approximately 19 feet over and above the Merrimack Canal. This bridge allowed students to move over the canal from one building to the other without having to go outside. 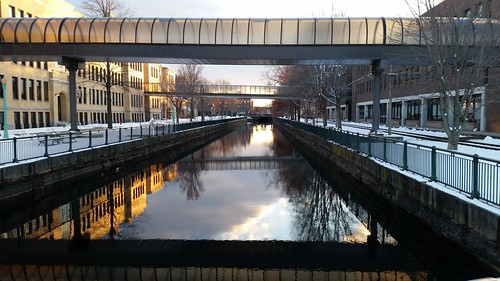 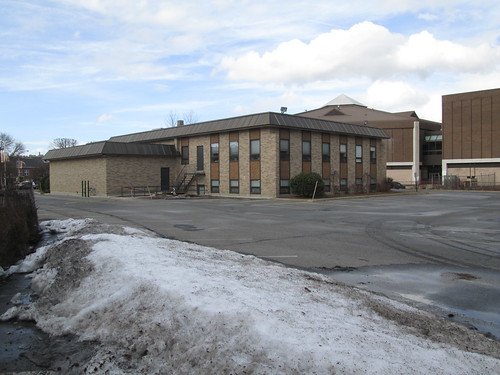 While not part of Lowell High School, the parcel and building at 75 Arcand Drive, commonly referred to these days as the “dentists’ building,” has been part of the new Lowell High discussion since one of the options submitted to the state would take this property by eminent domain and construct a new Lowell High building upon it.

This parcel was also part of the Northern Canal Urban Renewal Plan and was taken by the City Development Authority by eminent domain in the 1960s. In 1969, the City Development Authority conveyed the parcel to the Trustees of Lowell Doctors Park Realty Trust for $25,000. Although the trustees have changed through the years, the same trust continues to own this property. 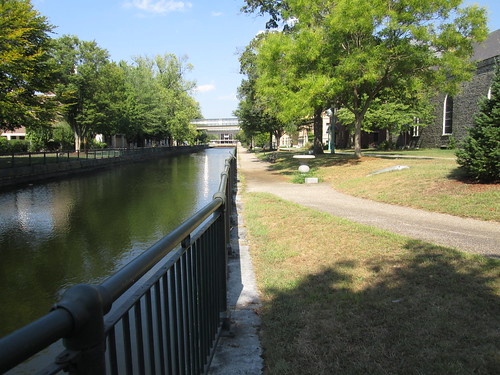 Going back to the beginning of this article, recall that before there was a Lowell High School on this site, there was the Merrimack Canal which was bounded on one side by Anne Street and on the other by Dutton Street. Between the streets and the canal banks were strips of land owned by the Proprietors of the Locks and Canals.

On March 20, 1824, the Proprietors of the Locks and Canals conveyed the grassy strip between Anne Street and the canal to Frederick French and George Carleton to be held by them in trust for the following purposes:

“to keep said lot of land as ornamental ground forever, the same being hereby dedicated and set apart by the grantor for the purpose of beautifying and ventilating the City and in trust that they, their successors and substitutes are not to suffer any building to be erected or to stand thereon and are to devote the same to the cultivation of trees, shrubs, grass, and such other things as may promote and advance the foregoing objects.”

In 1909, the Proprietors of the Locks and Canals appointed the mayor of Lowell and the chair of the Board of Parks to be the trustees (i.e., owners in trust) of this parcel, which by then had been named Lucy Larcom Park. When the city changed its charter in the 1940s, the trustees changed from the mayor to the city manager, but the Board of Parks chair was retained as the second trustee. From what I can see, that is how Lucy Larcom Park continues to be owned – in trust for the benefit of city residents, but not technically owned by the city in the sense that the city is not free to sell the land or to use it for purposes inconsistent with the original 1824 grant.

However, what is now the main walkway through Lucy Larcom Park was not part of the 1824 grant. Instead, it was a city street, Anne Street, which has since been discontinued as a street. That land is most likely owned by the city outright and would not be bound by the same restrictions that encumber the portion of the park next to the canal.

As for state Article 97 restrictions, I didn’t find any recorded for Lucy Larcom Park. But like the Cawley site, if the city took state funds to improve Lucy Larcom Park, there could possibly be some state restrictions on the use of the land, notwithstanding the absence of any document on record at the registry of deeds. 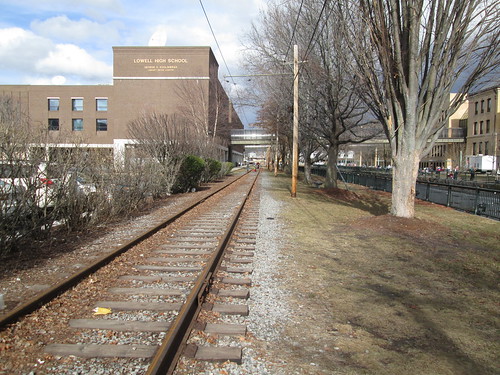 Across the Merrimack Canal lies another strip of grass, this one with train tracks down the middle of it.  This land is owned by the city as part of the earlier conveyance from the City Development Authority. However, the United States (i.e., Lowell National Historical Park) owns a 13 foot wide easement for the trolley tracks. The easement was originally owned by Boston and Maine Railroad which conveyed it to the National Park in 2004.

The Merrimack Canal is owned by Enel North America, as successor to the Proprietors of the Locks and Canals. As the 1980 air rights easement for the first pedestrian bridge suggests, the owner of the canal owns the rights to the air above it. I didn’t look very hard for a second easement for the second pedestrian walkway that was constructed in 1996, so one probably does exist. (There is an easement from B&M to the city that was created retroactively in 2004, granting permission for both pedestrian bridges to cross the railroad tracks which were just then being conveyed to the National Park).

So that is some of the history of the land upon which Lowell High sits. Researching land records, especially those going back hundreds of years, is a complicated process. Consequently, the above is offered to provide some historical context, not as the final word in any legal proceedings.