One of the challenges about the real estate that forms the Cawley Stadium complex is that it’s a patchwork of parcels that have been compiled by the city over more than one hundred years. In this post, I try to trace the ownership chains of the various parcels to provide some historical context for today’s debate about the future use of the area around the stadium.

But before getting to that, let’s look at the latest on the deed restrictions imposed by Article 97 of the Massachusetts Constitution.

Two agreements of this type are recorded for portions of the Cawley complex. The first was executed on November 23, 1994 and was recorded on March 10, 1995 (in book 7412, page 154). In it, the state provided the city with $145,950 to acquire “2.3 acres of land to be developed by the city of Lowell as a recreational field.” This encumbers what I will call the soccer field, which is shown as #2 on the photo below.

The second agreement is dated November 1, 1998 and was recorded on June 16, 2000 (in book 10880, page 122). In it, the state provided the city with $300,000 for “the design and renovation of the visitor’s bleachers and the perimeter track at the Cawley Stadium complex.” This agreement gives the address of the property encumbered as 424 Douglas Road which is the address of Cawley Stadium. It also identifies the deed encumbered by this agreement as one in book 859, page 20. This is the land upon which Cawley Stadium and the parking lot were built. The stadium is shown as #1 on the photo below. [NOTE: yesterday morning I thought this agreement referred to the practice fields – #4 below – but after further research, I am convinced it refers to the stadium itself).

Those are the only agreements with the state for the Cawley complex that I have found to be recorded.

BUT – The bottom line is that if the city took money from the Commonwealth to improve a particular parcel for recreational purposes, it is covered by the Article 97 restrictions regardless of whether the agreement was recorded. If the agreement exists, the city is bound by it. I’ll explain why that is so at the end of the post. 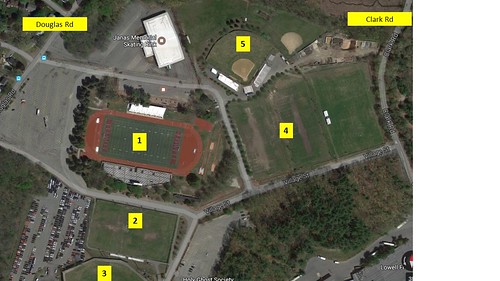 The above photo is a Google overhead image of the Cawley Stadium complex. I have numbered the major parcels as follows:

These parcels came under city ownership in four separate chains of title:

Cawley Stadium (#1) – On March 13, 1929, Paul C. Howley of Lynn, Massachusetts granted to the Lowell High School Alumni Association, a 10.96 acre parcel shown as Lot 2 on a 1901 plan of land belonging to the Heirs of Thomas Fields. (Howley had purchased this parcel in 1919 from Lowell Trust Company which had foreclosed on a mortgage from Herbert and Margaret Merrill). Then, on December 15, 1934, the Lowell High School Alumni Association granted this parcel to the city of Lowell which continues to own it today. This parcel includes what is now Cawley Stadium and the adjacent parking lot that runs along Douglas Road.

Soccer Field (#2) – On June 20, 1987, ten heirs of various members of the Cawley Family sold this parcel for $19,999 to Evan Themeles and Thomas Themeles as Trustees of the E&T Realty Trust. While the area of this parcel is not stated, its dimensions are roughly 285 feet x 389 feet x 245 feet x 380 feet (a rectangle that corresponds with the size of the soccer field). On February 24, 1988, Evan and Thomas conveyed it from their E&T Trust to themselves as trustees of Stadium Realty Trust. On December 2, 1994, Evans and Thomas as trustees of Stadium Realty Trust, sold this parcel to the city of Lowell for $240,000. Then, on May 4, 1995, the Themeles brothers recorded a “confirmatory deed” for this property, “to correct the earlier deed” still granting the property to the city but also dedicating the land for park purposes in accordance with MGL c.45, s.1.

Alumni Baseball Field (#3) – On November 14, 1922, James Kennedy and Peter Roach conveyed a parcel on “the northerly side of Rogers Street and the westerly side of Village Street and known as Spalding Park” to the Lowell High School Alumni Association (it seems that this parcel was already used as a baseball field at the time of this conveyance). This parcel was roughly five acres and abutted the parcel that later was used as the soccer field. On October 7, 1953, the Lowell High School Alumni Association granted this parcel to the city of Lowell.

Practice Fields and Martin Softball Field (#4 & #5) – On May 10, 1929, Charles Dancause granted to the Lowell High Alumni Association a large parcel of land that was north of the east-west line of Village Street, and west of Clark Road. This parcel abutted the easterly boundary of the Cawley Stadium lot described above, and straddled the boundary line between Lowell and Tewksbury (with most of the land in Lowell). Then, on July 28, 1964, the Lowell High Alumni Association conveyed a portion of this parcel to the city of Lowell on the condition that the city “shall use said land as a suitable practice field and play space for football and other athletic sports for Lowell High School students.” Failing that, the parcel would revert back to the Alumni Association. While no square footage of this parcel is given, its dimensions are 455 feet by 420 feet with the base of the rectangle running along Village Street and the long side running along the Cawley Stadium parcel. So this is the parcel that includes the Practice Fields and almost certainly the Martin Softball Field. The remainder of the Dancause parcel seems to have been forgotten until the town of Tewksbury took its portion of the land for nonpayment of property taxes in 2011. Before the town could foreclose on its tax taking, the Lowell High Alumni Association on September 29, 2014, conveyed the remainder of the Dancause parcel to the city of Lowell on the condition that the city pay the back taxes to the town of Tewksbury (which it did).

So that’s the ownership history of the various parcels that make up the Cawley Stadium complex.

As I wrote at the beginning of this post, two of these parcels, the softball field and the stadium itself, have Project Agreements between the Commonwealth and the city recorded and linked to them. While there is not a separate Project Agreement recorded against the Practice Field parcel, the critical question is whether such an agreement exists, not whether it is recorded. Put another way, if the city took money from the state to refurbish the practice field and the Martin Softball Field, those parcels are almost certainly encumbered by the terms of the same type of Project Agreement, meaning they would fall within the rules governed by Article 97 of the Massachusetts Constitution.

Here’s why the Project Agreement not being recorded doesn’t make any difference. The reason something gets recorded at the registry of deeds is to put the world on notice of a document that might affect the ownership of land. Let’s say you borrow money from a bank and put a mortgage on your house as security for the loan, but the lawyer for the bank fails to record the mortgage. I decide I want to buy your house and do a title search at the registry of deeds and find no mortgage. You don’t tell me about the mortgage and I have no actual knowledge of it. I pay you the fair market value and you convey the house to me. The lender then tries to foreclose, but I, as a good faith buyer for full price, prevail over the lender because it failed to record its mortgage.

Change the facts so there is no sale involved. You just stop paying your mortgage. The lender comes along to foreclose and you say, “You can’t foreclose, you never recorded your mortgage.” In that case, the lender wins, because you had actual knowledge of the mortgage. The failure to record it is of no benefit to you since you were a party to it.

At the close of last Thursday’s council meeting, the City Manager and the City Council agreed that the city should begin pursuing relief under Article 97 to free the practice field parcel from the state’s recreation only encumbrance. That certainly seems the proper course at this point. There don’t seem to be any technicalities that would allow the city to escape that process.

Long term, it would probably be advisable for the city and the state to reconcile their records as to what other city parcels are encumbered by Article 97 restrictions. I was only able find one additional Article 97 Project Agreement of this type on record (for the South Common, recorded on March 4, 2016), but I suspect a number of other parcels around the city might have similar, but unrecorded, restrictions. As we have learned from this episode, it’s best to know up front what encumbrances there are on your property.

As for the other types of restrictions included in deeds, like the one imposed by the Alumni Association on the practice field, they are easier to overcome than are these Project Agreement restrictions, so it’s unlikely that they would serve as a major impediment to the proposed high school.