The memories of the Kennedys are touched today on this anniversary of the wedding of Jacqueline Lee Bouvier and John Fitzgerald Kennedy. The couple was married in 1953 in historic St. Mary’s Church in Newport, Rhode Island in a ceremony presided over by Richard Cardinal Cushing, Archbishop of Boston. The traditional wedding write-up from the Kennedy Library collection gives us the favor of that day… photos document a happy couple…  the Camelot metaphor was born that day….  from our archive... 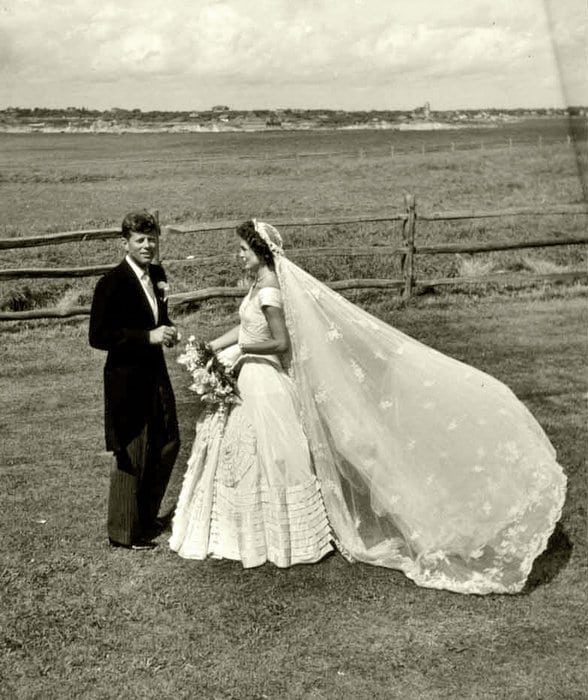 Jacqueline Lee Bouvier and John F. Kennedy were married on the morning of September 12, 1953, in the picturesque St. Mary’s Roman Catholic Church in Newport, Rhode Island. The more than eight hundred guests included many notable individuals.
The bride, given in marriage by her stepfather, Hugh D. Auchincloss, wore a dress of ivory tissue silk, with a portrait neckline, fitted bodice, and a bouffant skirt embellished with bands of more than fifty yards of flounces. Her rosepoint lace veil, worn first by her grandmother Lee, was draped from a tiara of lace and orange blossoms. Jacqueline wore a choker of pearls and a diamond bracelet that was a gift from the groom. The bride’s bouquet was of pink and white spray orchids and gardenias. Her attendants, dressed in pink taffeta, included her sister, Lee, then Mrs. Michael T. Canfield, as matron of honor: her stepsister Nina G. Auchincloss as maid of honor: a bevy of ten bridesmaids, among them the groom’s sister Jean and sister-in-law Ethel, and the bride’s former boarding school roommate, Nancy Tuckerman. Half sister Janet Auchincloss was flower girl and half brother James Auchincloss served as a page. Senator Kennedy’s best man was his brother Robert and among the ushers were brother Edward Kennedy, brother-in-law Sargent Shriver, cousin Joe Gargan, brother-in-law Michael Canfield, Lem Billings, Red Fay, Torbert MacDonald, Senate colleague George Smathers, and Charles Bartlett, who had introduced the couple.
The ceremony was performed by Archbishop Cushing, a friend of the Kennedy Family, and he was assisted by four other priests, including the former president of Notre Dame and the head of the Christopher Society. Before the mass, a special blessing from Pope Pius XII was read.

The reception was held on the huge terrace of the 300 acre Auchincloss oceanfront estate, Hammersmith Farm, for more than twelve hundred guests. The wedding cake, four feet tall, had been ordered by Joseph Kennedy. Meyer Davis and his orchestra played under a huge canopy.

After their honeymoon in Mexico, the Kennedys returned to Washington D.C.