This is a cross-post from Dave McKean’s LowellIrish.  Dave tells of more grave site discoveries in St. Patrick’s Cemetery by Walter and Karen Hickey – these are of the Daughters of Charity. Dave notes that nearby, the recently rediscovered and cleared grave stones of some SNDs /Notre Dame nuns are again over-grown. In my opinion, a sad situation in a Catholic Cemetery. He also noticed a small plot of SSMNs (Sisters of St Mary of Namur) stones across the way.  There will be a call for volunteers again in early fall for yet another clean-up in Yard 1. Grads of the Sacred Heart School, St. Patrick’s and others interested in preserving the sisters’ grave sites should watch for the call and “dare” to join in the clean-up. We’ll have the information here on the blog! In the meantime, read his post here: 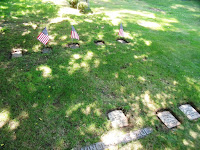 Daughters of Charity Lot, cleaned
If you’ve got the history bug, you will understand the rest of this entry.  A short time ago we wrote about how Walter and Karen Hickey found the stones of 4 Daughters of Charity, the nuns from St. John’s Hospital, who served as nurse during the Civil War.  Obviously they could not leave well enough alone.  Spending Saturday and Sunday of last week at the cemetery they thought they would honor the Sisters by uncovering the sod that has gathered over their stones.  They did just that and then continued to do the other Sisters.
As they uncovered each stone in the Sisters’ lot they researched each name.  One young Sister died of influenza during the 1918 epidemic while treating patients in the hospital. Others died of old age.  And then they found them- 3 more Civil War Sisters!  Like their confreres, two served at the Satterlee Hospital in Philadelphia and another at Fort Lincoln Hospital.
Walter and Karen have placed American flags on the graves of those who served.  Like many Civil War veterans not all of the Sisters were native born coming from Ireland and Germany.  Sr. Josephine, one of 8   Sr. Justine and was a nurse at Ft Lincoln in Washington DC.  Sr. Loyola was a German immigrant and was a sister for 42 years serving at Satterlee during the war.  All died while on mission to St’ John’s in Lowell. 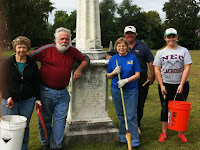 Walter & Karen next to McDermott stone, 2014
Today the Daughters of Charity’s lot is pristine and shows the respect these women, foreign born and American alike, who served their country and their mission to heal the sick.  What Walter and Karen have done recognizes that call.  In their name, we say thank you.  They do not ask for applause or wave a flag drawing attention to themselves, but go about their work quietly while making a mark on the history of the city.
A little note– The Daughters of Charity have asked for photos and documents Karen and Walter have collected for their archives.  Less than a week after all their work, we visited the site.  Already grass clipping have started covering the markers.  Last September a  group of volunteers cleaned the Sisters of Notre Dame lot.  On our visit there barely a stone was visible.  We also found a second lot belonging to the SNDs, barely visible. Something caught my eye and directly  across is a small lot belonging to the SSMN (Sisters of St Mary of Namur).  These sisters operated Sacred Heart School.  The few stones barely peek out from the sod.  In early fall we ask for volunteers to clean the stones in Yard 1 to prepare for the tour.  We will need a team of people if we dare to include these new lots.