This is a cross-post from LowellIrish where historian Dave McKeon comments about cartoonist Thomas Nast and his apparent ant-Irish and anti-Catholic cartoon attacks. He offers another side of Nast – who by the way wasn’t very fond of Ben Butler and subjected him to the Nast-y cartoon pen. He asks for your opinion and also asks for your help. Dave is preparing a history of the Lowell Irish and needs some people-picture activities from the Sacred Heart, St. Michael’s and the Immaculate churches and schools. Can you help? BTW – I’m not letting Nast off the hook as anti-Irish!

It’s hard to believe that the man who pretty much gave us the image of the Santa Claus we all know and love, was the same man who gave us some of the most blatant anti-Irish cartoons of the 19th century.  So was Thomas Nast a racist?  Some of you may know that I’ve been doing research for a history of Lowell Irish due to come out in March of 2016.  (More about that later.) When going through the hundreds of articles, it’s clear that there were times in Lowell’s past when our ancestors were not well-liked or wanted in Lowell.  Some of that may have been their own doing.  It’s also clear that there was a more liberal element in Lowell who wanted to support these new people. 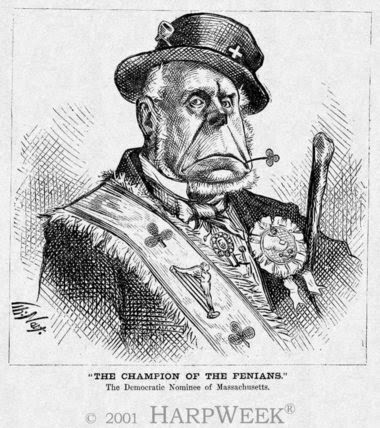 Nast is called the “Father of American cartoons.”  He used his pen to show his opinions on many topics Americans faced at the time and his own political views.  German-born, Nast was educated in American schools.  He was raised Catholic, but at some point converted to Protestantism. Living in New York City he witnessed how Irish gangs were often involved in some of the worst criminal activity in the city.  The cartoons we know so well show his views towards the Irish.  But was he a racist?  I was only aware of a number of his pieces of work that all depict Irish as monkeys of thugs.  But Nast also drew cartoons that supported Chinese immigration, the abolition of slavery, and opposed racial segregation.  (See Wikipedia for more info on his work.)
More than one piece of research on Nast denies the man was a racist, claiming he was just being a political cartoonist.  He was doing nothing different than any other cartoonist of the time or today.  It just happens we know only his anti-Irish work.  There is also the point that as a political cartoonist his job was to stir up debate and point out the current thinking of the day.  Think of recent happenings in Paris.  Was he just showing what others were thinking?  Was he anti-Irish or anti-Catholic?  In his defense you could hardly find a newspaper in this time period that didn’t run an anti-Catholic article, joke, or even an employment sign saying “No Catholic need apply.” (This was also found in local papers.)  So was he a racist or just reflecting the views of his time in history?  You decide.
Let me return to the book.  Help!  It’s far more work than I ever imagined.  What is it people say when a hobby becomes work?  I’m on a search right now for photos from the different churches and schools.  St. Pat’s is well represented, but the book is about Lowell. Can you help?  I need pictures from Sacred Heart, St. Mike’s, Immaculate, and St. Peter’s.  The earlier the better.  I’ve got pics of the buildings, but our story is really about people.  The men and women who made up the neighborhoods, the kids in school uniforms, the nuns and priests at work in school and church.  I’d love to get a picture of one of the nuns from St. John’s Hospital.  I think they had the big wings.  Someday I’ll tell you the story of how I gave one a smack across the face.  Hey, I was four, but I remember it. If you’ve got something to share please get in touch.  dadumc@comcast.net

Back to Nast and Ben Butler…
Here’s an anti-Ben Butler Thomas Nast cartoon … it is of note that Ben Butler as a lawyer represented many Lowell Irish. (Marie) “The Cradle of Liberty is in Danger”
“Fee, Fi, Foo, Fum!” The Genie of Massachusetts smells Blue Blood