The 54th Regiment was the first military unit consisting of black soldiers to be raised in the North during the Civil War. On this day – July 18, 1863 – the 54th Massachusetts Volunteer Infantry Regiment launched an attack against Fort Wagner, South Carolina – a highly fortified outpost on Morris Island that was part of the Confederate defense of Charleston Harbor. They were led by Colonel Robert Gould Shaw who was killed in the action.

On 16 July 1863, serving as a diversion for the intended attack on Morris Island, South Carolina, the Fifty-fourth Regiment saw its first action on James Island, losing forty-five men. On 18 July, after several days with little sleep, food or water, the regiment was instructed to lead the attack against Fort Wagner on Morris Island. In the disastrous assault led by Colonel Shaw, the 54th suffered very heavy losses, most notably the loss of their commander, and nearly half of the men present were killed, wounded, or missing. Despite this, the unit showed exceptional bravery and honor, never retreating as they waited for the reinforcements which would never arrive. 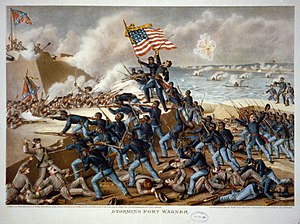 In 1900 – Sergeant William Harvey Carney was awarded the Congressional Medal of Honor –  the nation’s highest military honor – for his bravery on July 18, 1863. He was wounded while planting the U.S. flag. He fought for the Union cause as a member of that fabled 54th Massachusetts Colored Infantry. While other African-Americans had been granted the award by the time it was presented to Carney in 1900, Carney’s is the earliest action for which the Medal of Honor was awarded to an African-American.

One Response to July 18, 1863 ~ Members of the 54th Massachusetts Regiment at the Seige of Fort Wagner