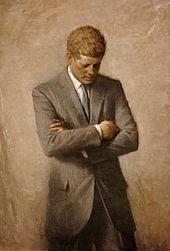 On July 10, 1960, Senator John F. Kennedy of Massachusetts spoke before an NAACP Rally in Los Angeles just before the Democratic National Convention. Here is the text of his remarks:

We meet on the eve of a great national convention. There our choice is more than the choice of candidates – it is the choice of party roles and responsibilities. Will we face up to the issues that face America – or will we, as Randolph said of Van Buren, “row to (our) object with muffled oars?” Will we appeal to the lowest common denominator – or will we offer leadership where leadership has so long been lacking? Will we inquire as to whether a policy is good for the North, South, East, or West – or will we know that a policy – if really good – is good for all people everywhere? And finally, will we confine our campaign to abuse of the party in power – or will we realize, to paraphrase a noted statesman, that a great “nay” is not enough – we need a mighty “yes” as well?

I hope my own views are clear. I want our party to speak out with courage and candor on every issue – and that includes civil rights. I want no compromise of basic principles – no evasion of basic controversies – and no second-class citizenship for any American anywhere in this country. And I have not made nor will I make any commitments inconsistent with these objectives.

While we point with pride to the strides we have made in fulfilling our forefathers’ dream of the equality of man, let us not overlook how far we still have to go. While we point with concern to denials of civil rights in one part of the country, let us not overlook the more subtle but equally vicious forms of discrimination that are found in the clubs and churches and neighborhoods of the rest of the country.

Our job is to turn the American vision of a society in which no man has to suffer discrimination based on race into a living reality everywhere in our land. And that means we must secure to every American equal access to all parts of our public life – to the voting booth, to the schoolroom, to jobs, to housing, to all public facilities including lunch counters.

Let us trust no one who offers slick and easy answers – for the only final answer will come from the work of thousands of individual answers, large and small, in the Congress, the courts and the White House, in states and cities all over America, in the actions of brave and wise public servants, and in the reactions of determined private citizens such as yourselves.

What we are seeking, after all, is really very simple. It’s merely a recognition that this is one nation and we are all one great people. Our origins may be different but our destiny is the same, our aspirations are identical – there can be no artificial distinctions, no arbitrary barriers, in securing these rights.

–The right of every man to work as he wants to work, to be educated as every human being deserves to be educated, and to receive for his labor or his goods a just compensation, which he can spend as he pleases, in the nation’s finest luxury store or the most modest 5-and-10.

–The right of every individual to obtain security in sickness as well as health, in retirement as well as youth.

–The right of every American to think, to vote, to speak, to read and to worship as he pleases – to stand up for his rights and, when necessary, to sit down for them.

–And finally, the right of all people to be free from the tensions and terrors and burdens of war, its preparation and its consequences.

These are not minority rights or even merely civil rights – they are the goals desired and required for every American. There is nothing complicated about these goals, however difficult their achievement. There is nothing unreasonable or unusual about these goals, however much some may resist them. But they will not be achieved without leadership – moral, political, legislative and, above all, executive leadership.

To be sure, there will be protest and disagreement – but if the end result is to be permanent progress instead of frustration, there must be more meetings of men and minds. And the place to begin is the White House itself, where the Chief Executive, with his prestige and influence, should exert firm and positive leadership.

Let us bear in mind that this is not merely a regional problem – it is not merely a national problem – it is international in scope and effect. For the average American of Caucasian descent does not realize that it is he who is a member of a minority race – and a minority religion – and a minority political system – and that he is regarded with some suspicion, if not hostility, by most of that restless, envious, surging majority. The tide of human dignity is world-wide – and the eyes of that world are upon us.

The time is short – but the agenda is long. Much is to be done – but many are willing.

Francis Bacon once wrote: “There is hope enough and to spare – not only to make a bold man try – but also to make a sober-minded man believe.”

My friends – if you are sober-minded enough to believe – then – to the extent that these tasks require the support, the guidance and the leadership of the American Presidency – I am bold enough to try.