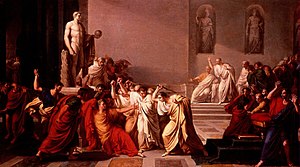 Caesar:
Who is it in the press that calls on me?
I hear a tongue shriller than all the music
Cry “Caesar!” Speak, Caesar is turn’d to hear.

Soothsayer:
Beware the ides of March.

Caesar:
What man is that?

Brutus:
A soothsayer bids you beware the ides of March.

The narrative from E-notes on Shakespeare quotes:

It is Lupercalia, an ancient Roman religious holiday. Caesar, the Roman  dictator, makes his appearance before the “press” (crowd) in the streets. From out of the crowd, a soothsayer issues his famous warning. And Caesar, a very superstitious man, isn’t the sort to take a soothsayer lightly.

The “ides” of March is the fifteenth; which day of the month the ides is depends on a complicated system of calculation Caesar himself established when he instituted the Julian calendar, a precursor of our own. The ides of January, for example, is the thirteenth; the ides of March, May, July and October is the fifteenth.

The importance of the ides of March for Caesar is that it is the day he will be assassinated by a group of conspirators, including Brutus and Cassius. Despite numerous and improbable portents—the soothsayer’s warning, some fearsome thundering, his wife’s dreams of his murder, and so on – Caesar ventures forth on the ides to meet his doom.

Shakespeare borrowed this scene, along with other details of Caesar’s demise, from Plutarch’s Life of Julius Caesar.  An English translation was readily available, but its precise phrasings weren’t quite dramatic enough for Shakespeare’s purposes. Where he has the soothsayer declaim, “Beware the Ides of March,” the more prosaic original notes merely that the soothsayer warns Caesar “to take heed of the day of the Ides of March.”

Thus,  the soothsayer’s warning to Julius Caesar – “Beware the Ides of March” – has forever marked that date and those words with a sense of  foreboding.

This play was popular with my  Sophomore English classes “back in the day” at Lowell High School. Is it still read and discussed?

2 Responses to Whither The Ides of March