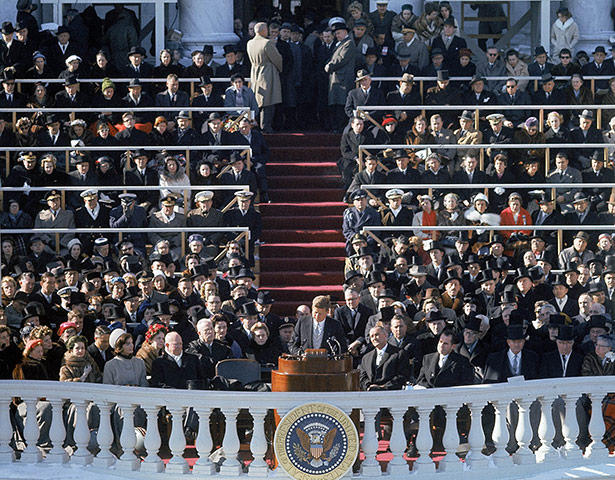 On this day – January 20, 1961 – John Fitzgerald Kennedy – son of Massachusetts – was sworn-in as the 35th President of the United States. As an eighteen-year old Irish, Catholic, Democratically-raised, Lowellian and avid Kennedy supporter, this was an important milestone in my life – details and impressions ever-remembered.

On January 20, 1961, on the newly renovated east front of the United States Capitol, John Fitzgerald Kennedy is inaugurated as the 35th president of the United States. It was a cold and clear day, and the nation’s capital was covered with a snowfall from the previous night. The ceremony began with a religious invocation and prayers, and then African-American opera singer Marian Anderson sang “The Star-Spangled Banner,” and Robert Frost recited his poem “The Gift Outright.” Kennedy was administered the oath of office by Chief Justice Earl Warren. During his famous inauguration address, Kennedy, the youngest candidate ever elected to the presidency and the country’s first Catholic president, declared that “the torch has been passed to a new generation of Americans” and appealed to Americans to “ask not what your country can do for you, ask what you can do for your country.”