On this day – November 13, 1830 – a poem by Oliver Wendall Holmes, Sr. entitled “Old Ironsides” was published. 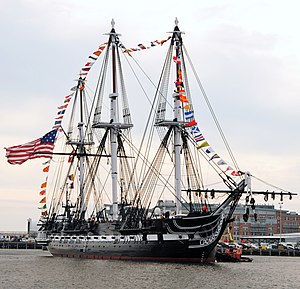 The USS Constitution – “Old Ironsides” – on her 213th birthday – October 21, 2010. She is berthed at Pier 1 of the former Charlestown Navy Yard in  Massachusetts.

Holmes had read a short article in a Boston newspaper about the renowned 18th century frigate USS Constitution, which was about to be dismantled by the Navy.  Holmes was moved to write a poem – “Old Ironsides” – in opposition to the ship’s scrapping. The patriotic poem was published in the Boston Advertiser  and was soon printed by papers in New York, Philadelphia and Washington. It not only brought the author immediate national attention, but the three-stanza poem also generated enough public sentiment that the historic ship was preserved.

Born in Cambridge, Massachusetts – Oliver Wendall Holmes, (August 29, 1809 – October 7, 1894) was an American physician, professor, lecturer, and author. Regarded by his peers as one of the best writers of the 19th century, he is also recognized as an important medical reformer. In 1847 Oliver was appointed Parkman professor of anatomy and physiology at Harvard Medical School, where he served as dean from 1847 to 1853. Holmes remained at Harvard until 1882. Holmes left his mark on his time period, and many honors came to him both at home and abroad.

Ay, tear her tattered ensign down!
Long has it waved on high.,
And many an eye has danced to see
That banner in the sky;
Beneath it rung the battle-shout,
And burst the cannon’s roar:
The meteor of the ocean air
Shall sweep the clouds no more!

Her deck, once red with heroes’ blood,
Where knelt the vanquished foe,
When winds were hurrying o’er the flood
And waves were white below,
No more shall feel the victor’s tread
Or know the conquered knee:
The harpies of the shore shall pluck
The eagle of the sea!

O better that her shattered hulk
Should sink beneath the wave!
Her thunders shook the mighty deep,
And there should be her grave:
Nail to the mast her holy flag,
Set every threadbare sail,
And give her to the god of storms,
The lightning and the gale!