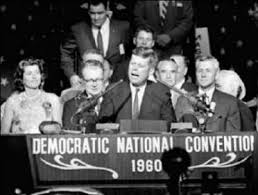 On this day – July 13, 1960: In Los Angeles, California, Senator John F. Kennedy of Massachusetts was nominated for the presidency by the Democratic Party Convention, defeating Senator Lyndon B. Johnson of Texas. The next day, Johnson was named Kennedy’s running mate by a unanimous vote of the convention.

Four months later, on November 8, Kennedy won 49.7 percent of the popular vote in one of the closest presidential elections in U.S. history, surpassing by a fraction the 49.6 percent received by Vice President Richard M. Nixon, a Republican.

On January 20, 1961, on the steps of the Capitol in Washington, D.C., John Fitzgerald Kennedy was inaugurated as the 35th president of the United States. A fourth-generation Irish American, Kennedy was also the nation’s first Catholic president. During his famous inauguration address, Kennedy, the youngest candidate ever elected to the presidency, declared that “the torch has been passed to a new generation of Americans” and appealed to Americans to “ask not what your country can do for you, ask what you can do for your country.”

Note: Delegates from the 5th MA Comngressional District to the 1960 nominating convention included: Richard K. Donahue of Lowell – Edward P. Gilgun of Woburn – Cornelius F. Kiernan of Lowell – Daniel D. O’Dea of Lowell and alternate Helen G. Droney of Lowell. The list shows us that the selection of delegates these days is done under different rules!