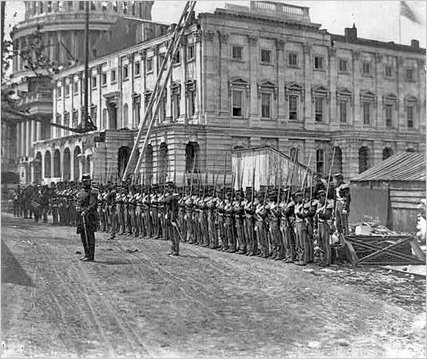 In today’s New York Times “Opinionator,” author and reporter Guy Gugliotta tells us of the struggle to finish the job of building the new Senate and House wings of the United States Capitol as well as the cast iron dome that would crown the rotunda. When architect Thomas U. Walter returned to Washington at the beginning of July 1861, he found a mess. With Congress out of session, the US Army set up shop – housing troops whom had come to Washington to protect the Capitol city.

For 10 years Walter had served as the architect in charge of completing this project planned not only to house the burgeoning Congress expected as states were carved from new territories but to stand as a symbol of the whole United States.

As Gugliotta describes while Walter was away with his family, the Doorkeeper Isaac Bassett accommodated the Massachusetts Sixth bloodied but unbowed from its encounter with rioters on April 19, 1861 in Baltimore in the Senate chamber…

Local militia soon were bivouacking in Senate committee rooms. Two companies of Pennsylvania volunteers were put in the new House chamber, and on April 19, the Sixth Massachusetts, bloodied and covered with dust after fighting its way through angry crowds in Baltimore, reached the Capitol. Doorkeeper Isaac Bassett put them in the new Senate chamber. Troopers camped in the galleries while their colonel converted the vice president’s room into his headquarters.

The Capitol became a halfway house. As each regiment received orders and departed, it was replaced by another. Very soon the soldiers wore out their welcome. Bassett, happy to welcome the Sixth Massachusetts, was appalled when he caught the New York Zouaves, a gang of hard-bitten Manhattan firefighters, ripping up a desk on the Democratic side of the Senate chamber with bayonets, thinking it had been used by Davis.

The uproar in the capitol including the set-up of kitchens in the basement, along with a string of bakeries and the accompanying odors of cooking and baking went beyond the pale. Finally, with the return of Congress and the help of Sen. Solomon Foot, chair of the Senate committee on Public Buildings and Grounds who also happened to be president pro Tempore of the Senate – the bakeries were gone, order was restored and after three years of work – the Capitol was all but finished under Walter’s supervision.

As another part of the story of the Civil War 150 read the full article here at the nytimes.com.