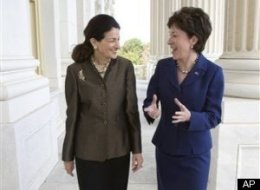 GOP members of the U. S. Senate Olympia Snowe and Susan Collins of Maine

From the HuffingtonPost this afternoon:

WASHINGTON — Senate Democrats were unable to overcome a Republican filibuster of the Paycheck Fairness Act on Tuesday, with the chamber falling two votes short of the 60 needed to end debate and proceed to a vote on the measure that would help combat wage discrimination on the basis of gender.

The vote broke down along party lines with the exception of Sen. Ben Nelson (D-Neb.), who sided with Republicans and voted against cloture. Not a single member of the GOP broke rank.
Observers closely watched the votes of Sens. Susan Collins (R-Maine), Kay Bailey Hutchinson (R-Tex.) and Olympia Snowe (R-Maine), all women senators who voted for the Lilly Ledbetter Fair Pay Act, which provides basic protections against wage discrimination.

“Senate Republicans had their latest opportunity to do the right thing, work with Democrats to reduce wage inequality for women, and help the American families they support,” said Senate Majority Leader Harry Reid (D-Nev.) in a statement after the vote. “This was a prime opportunity to enact the kind of common-sense, bipartisan solutions to our economic problems that the American people are demanding, but Republicans spurned it.”