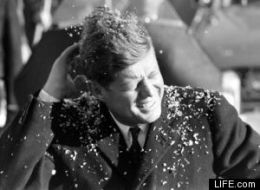 HuffingtonPost.com advises us that on this 50th anniversary of the election of John F. Kennedy as President of the United States, LIFE.com published today never-before seen photos of JFK from the archives.

Fifty years ago today, on Nov. 8, 1960, John F. Kennedy was elected the 35th president of the United States. At 43 years old, Kennedy was the youngest person elected to the office (still true today). He defeated Richard Nixon in one of the closest national elections ever. Kennedy won the popular vote by two-tenths of one percent (49.7% to 49.5%), while taking the Electoral College 303 votes to Nixon’s 219.

The gallery of these rare photos may be seen here. It’s a great array of classic images from the 1960 campaign.