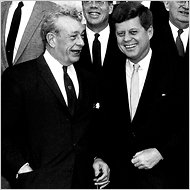 Writer and commentator James Warren of the Chicago News Cooperative has an interesting take on a taped conversation with GOP Senate Minority Leader – the late Everett Dirksen – and President Kennedy in the Oval Office. The tape and transcript was recently released by the  JF Kennedy  Library. The focus of the conversation was the coming Senate debate on the whether to ratify the Nuclear Test Ban Treaty. As Warren noted about the Dirksen advice and Kennedy response:

Dirksen spoke of the “overriding fear” of two key conservative Southern Democrats, Senators John Stennis of Mississippi and Richard B. Russell of Georgia. “The question is how you overcome it,” he said, adding that their anxiety turned on “whether we’d be disadvantaged by the Soviets.”

He proposed that Kennedy send a letter of reassurance to the Senate. “I hope you don’t mind that this is a little presumptuous on my part,” a deferential Dirksen said, proceeding to read aloud a copy he had already drafted.

It said that underground testing would be pursued without delay, that our detection facilities would be expanded and that we would support a “dynamic program of weapons development” and pursue nuclear explosives for peaceful purposes under the treaty’s rules.

Dirksen, a Republican, then counseled Kennedy, a Democrat, on how to mollify specific colleagues of both parties, as well as former President Dwight D. Eisenhower. To that end, he included a passage about using “every weapon at our command, including our entire arsenal of nuclear weapons” if any aggressor threatened our national interests.

Dirksen conceded that he had taken heat for his support of the treaty, for which The Chicago Tribune “excoriates me.” Kennedy joked that such barbs did not compare with those in a new book — “J.F.K.: The Man and the Myth” — by the conservative columnist Victor Lasky.

The president was clearly grateful for Dirksen’s counsel, underscoring that without such a treaty lots of countries, including Israel and Egypt, would seek a nuclear option. “We’d have a bitch of a situation,” he said.

Kennedy did send a letter to the Senate, and the treaty was ratified.

Warren mockingly ponders – “Now, can you imagine Mitch McConnell, the Senate minority leader and a Republican from Kentucky, lifting a finger to similarly assist President Obama?

The difference in my view is that Senator Everett Dirksen and those leaders in the House and Senate from other days were true statesmen. I’m old enough to remember these men and women – Democrats and Republican – and for that I’m grateful.

One Response to When There Were Statesmen – Dirksen and Kennedy, 1963