Chapter 9: Inside & Outside Study Hall

Sixty desks were arranged in ten rows in the second floor study hall where any breach of the silence rule lead to the worst of sanctions – recreation deprivation. Every cough, sneeze or sigh echoed so clearly into the adjacent hallway that supervision wasn’t necessary. Although the girls were on their own, they were very much aware that alert ears and X-ray eyes were never far away. The only possible activity at the end of the day was studying, or at least pretending to do so. The decor consisted in a simple crucifix on the front wall and an embroidered tapestry hanging of Québec’s motto “Je me souviens” (“I remember”), both reminders of the school’s cultural heritage. The pale tired blue of the walls added to the chilly ambiance. If austerity were conducive to proper study, then the SFA study hall was the place to be.

Blanche’s desk was in the second row next to large windows which gave her a magnificent view of the school grounds. Darkness had not yet come when she took her seat that Thursday evening. A lingering glimmer of light on the horizon set off the silhouettes of surrounding trees to make lacy patterns of dark boughs on the sky. Scenes like this made her enjoy study hall sessions because taking advantage of the view helped lift her trapped-inside feeling. The sheer beauty of nature transported her into another sphere, to where the spirits of the Penacooks lived. Even before Sister Fran had told her so, she knew that the Hurons and the Penacooks had souls and loved the Almighty according to their own rites and rituals. 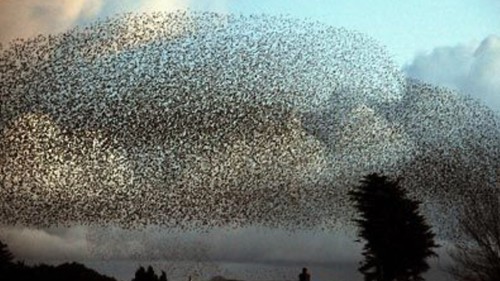 As she shuffled her books around to find notes for the next morning’s quiz, she heard a whooshing sound. Lifting her gaze, she saw what looked like a cloud undulating past the windows. She had never seen anything like it. The dark swirl spun around the building then dissipated as suddenly as it had appeared. It was a flock of birds soaring over its fair-weather habitat in a mysterious farewell choreography before heading south for the winter. Blanche didn’t know what species they were. Had she witnessed the aerial ballet of tree swallows, starlings or common blackbirds? Sister Fran would enlighten her the next morning at employment. Recovering her senses after that magical sight, Blanche opened her notebook to the algebra section wondering if the birds’ flight respected a mathematical pattern. If that were the case, why couldn’t her math teacher use it as an example instead of all the abstract text book thingamajigs? Illustrations from nature would stick to students’ minds better, wouldn’t they? Another question for Sister Fran.