Andy, Titi and Blanche found moaning and groaning about strict teachers, boring courses and endless homework quite enjoyable. Among the top contentious points was the shower rule. Like a lot of teenage girls, they all liked to dilly-dally in the bathroom.

“What is this thing about rationing showers? I don’t get it”, Andy said.

Titi had an explanation. “It’s cuz they want to keep the water bill down I guess. Did you notice that it turns freezing cold after five minutes? Hell, it takes me way more than five minutes to get my hair wet, let alone shampoo and rinse! Take a look at the grime on my head. It’s dried up shampoo and it makes my scalp really itchy. I’m gonna write to my mother about it and maybe she can talk the headmistress into letting me wash my hair THOROUGHLY”.

“Oh boy Titi, careful about what you tell your mother”, Andy warned. “You know Madeleine the sophomore who showed us how to roll up our skirts? She has a cute pixie now but last year when she arrived here she had waist-length hair like yours. Well, she had the same problem as you and she complained. The headmistress told her mother to cut her hair because it was too much bother and also pointed out that the shower rules had to be strictly enforced. When Madeleine found out she got wicked mad and decided to take things into her own hands. So in arts and crafts class, she grabbed a pair of embroidery scissors and hacked off all of her hair. The whole thing caused a ruckus so they changed the rule from cutting long hair to pulling it back into a pony tail.”

Turning to Blanche, she continued. “Pale Face, you don’t have to worry about having enough time to wash your hair. Yours is so thin that a squirt of shampoo with a couple drops of water will do. That’s maybe thirty seconds of your shower time. The other four and a half minutes should go to arm pit scrubbing because you certainly have a way of announcing your presence from afar!” Unable to respond, Blanche fled to a copse of fragrant pines where the air was soothing. 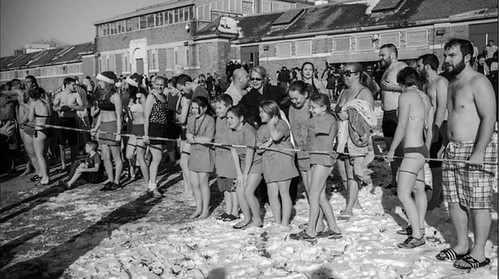 The shower discussion came up several times. Sure, the nuns were thrifty. Four narrow, no-nonsense stalls accommodated sixty boarders making daily showers for all impossible. But why so little time to wash? Blanche and her friends usually exceeded the five-minute limit and ended their showers with icy cold water. They got used to it and finally found it so invigorating that they all planned on joining Southie’s  L Street Brownies who, following a tradition dating back to 1902, plunged into the icy waters of Dorchester Bay every January 1st.

The shower issue led to a sermon one evening after supper. On the menu that day was “mystery meatloaf” because the ingredients were unidentifiable. Carrots, mashed potatoes and green jello, topped with cream from a local dairy farm, completed the meal. The boarders served themselves from the buffet and were expected to clean their plates. Nothing could go to waste.

After the meal came headmistress Sister Theophile’s speech. Standing straight and tall on the nuns’ platform, she commanded silence with a sweeping gaze. Since no one could place a number on her impassive face, she seemed ageless. After several years of religious training in an English abbey, she had returned to America with the poise of an aristocrat. The terms “prim and proper” suited her well. She was the only easily identifiable nun because she seemed to float from one place to another in rubber-soled shoes which muffled her steps. Her demeanor was even icier than the showers and her tiny black eyes bore into everyone. Even Andy and Titi were impressed by her glare.

“My dear young ladies, I would like to say a few words about time spent in the showers. After five minutes Sister Gerald turns the faucets onto the cold position. Normally, that should deter you from breaking our rule. However, some of you continue to ignore it and I’m particularly astonished that newcomers are among the worst offenders.” Andy, Titi and Blanche immediately lowered their eyes.

“I have had wind of the gossip concerning our apparent ‘stinginess’. This is not warranted. Spreading rumors is dishonest. Dishonesty is lying and lying is a sin. We do not wish our boarders to extend their time in the showers. Your bodies are to be cleansed and that is feasible in five minutes. Lingering in the showers can lead to impure thoughts. Have I made myself clear?”

After her brief exposé, Sister Theophile stepped down from the platform, crossed the dining hall and floated through the back door while the girls respectfully rose. With a crisp click from a wooden clapper, Sister Gerald instructed everyone to proceed outside for recreation before homework in the study hall.

Outside, the dusk decked out the sky in delicate pastels. Wisps of pale pink and peach gradually blended into mauve and blue, like water colors weeping into one another at the flick of an artist’s brush. The evanescent moments, when the heavens’ shimmering glow blankets the earth, were Blanche’s favorite part of the day. She tried to open her eyes wide enough to take it all in and be lifted by it somehow. Instead, when her friends surrounded her, she mechanically followed, befuddled by the idea that long showers could stir up “impure” thoughts.

“What did you guys think of that shower speech? Far-out!” Andy belted in Blanche’s ear. “Yoo-hoo PF, snap out of it and come back to us. We are HERE!” 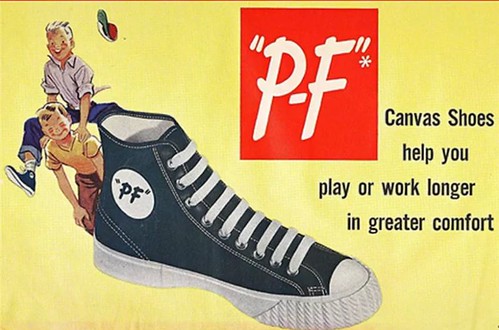 “Yeah Andy, call me ‘PF’. That’s better than ‘Pale Face’ cuz it reminds me of ‘PF Flyers’ my next pair of sneakers. They’re the BEST. So yeah, I’m PF and don’t call me ‘Pale Face’ ever again! I’m PF and one day I’m gonna fly. Don’t know where and don’t know how but I’m gonna FLY!” For the first time, Blanche stood up to Andy and didn’t feel the urge to hide in the woods.

“Okay, okay PF. Keep your pants on, or rather keep your BLOOMERS on. What did you guys think of the speech? Kinda weird wasn’t it?”

Titi reasoned, “Some people imagine evil can appear out of nowhere. What could possibly happen to us in those tiny showers? I dunno. And of COURSE we’re ‘impure’! We take a shower to wash and get pure right? And anyway, I thought Sister Theophile sounded like Queen Elizabeth. She was in England for a really long time and it’s kinda cool to have a headmistress who sounds like a fancy English person, don’t you think?”

Blanche had picked up on the headmistress’s posh accent but couldn’t understand justifying quick showers. “I don’t care about Sister Theophile’s speech. Maybe I’m stupid but right now I’m thinking about tomorrow’s algebra quiz which is more important.” She walked away from the group as recreation was coming to a close. Andy shouted behind her, “PF is already flying. She doesn’t need new sneakers to do that. Let’s leave her to the excitement of reviewing equations. She didn’t get anything the headmistress said but she’ll figure it out eventually.”

The now indigo sky was slashed by a thin crimson line where the sun had just disappeared as the three girls hurried up the drive to get to study hall.