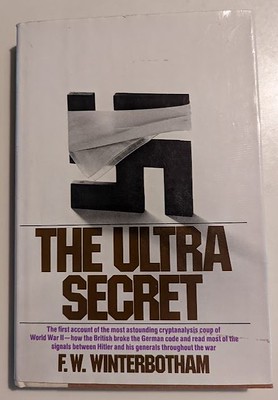 History has always been my favorite subject. At a young age, I was especially interested in the history of World War II. Perhaps it was because in the early 1960s, so many of those around me had served in the military – someone who was 20 years old when Pearl Harbor was attacked would only be 42 when President Kennedy was assassinated. Or perhaps popular culture in the 1960s, especially TV, was filled with shows like Combat, Twelve O’Clock High, Rat Patrol, and even McHale’s Navy and Hogan’s Heroes. Whatever the reason, in junior high and high school, I read a lot of World War II nonfiction.

And so it was in 1974 in my junior year in high school that I picked up The Ultra Secret by a retired Royal Air Force officer named Frederick Winterbotham. The book created a sensation. Winterbotham, who flew fighter planes and had been a German POW in the First World War, spent the Second World War in a top secret Allied code breaking office in England. This outfit had cracked the “unbreakable” code used by the Germans during the war and so the Allied leaders knew in advance much of what the Germans were going to do.

This intelligence feat was such a highly guarded secret that anyone with knowledge of it was forbidden from publicizing it. Disclosing this information was a crime punishable by many years in prison. But under English law, this classification lasted for only 30 years so when 1974 arrived, Winterbotham, his publisher, and their lawyers decided it was safe (and legal) to tell the story.

From a historian’s perspective, this was earth shattering. Generals who had been perceived as military geniuses turned out to be the ones who made the best use of this intelligence. Others who were remembered as inept combat commanders were the ones who disregarded this super secret info.

The name Ultra was used to identify the security classification for this material. Most readers will be familiar with the terms Confidential, Secret, and Top Secret. Those are the standard classifications used by the United States now and for decades past. But just because someone has a Top Secret clearance doesn’t mean they have access to all information in that category. Most intelligence is shared on a “need to know” basis. For that reason, intelligence is further classified into “compartments.” Only if your job requires you to use that information are you given access to that “compartment” which is more precisely called Special Compartmented Information or SCI (terms we’ve seen in the news recently but more on that below).

The main reason this intelligence is so closely protected is that it is highly perishable which brings us back to The Ultra Secret. In the 1930s, the Germans began using an encoding/decoding machine that the Allies named Enigma. This machine looked like a manual typewriter with six vertical dials on top. Each dial had a full set of letters and numbers around its circumference. Each day, every German operator would spin his dials to a particular setting that had been communicated to the operator by other means. To send a message, the sending station would first arrange the Enigma machine’s dials at the proper setting, then type each letter of the message on the keyboard of the Enigma machine. On a typewriter, if you press the “A” key, the letter “A” gets imprinted on the paper. But with Enigma, the letter you pressed spun through the six dials and came out on the paper as something else. For example, if you pressed the “A” key, it would show up on the output paper as “X.” (Because each letter went through six gyrations of the dials, the code was almost impossible to break – or so the Germans thought which is why the kept using it). The entire message would be encoded this way. Then the random letters on the resulting paper tape would be transmitted by Morse code. That message would make no sense to anyone who intercepted it since the letters of the message were gibberish. But if you had another Enigma machine with the correct dial settings for that day, you could decode the message. The receiving German operator would write down the gibberish and then key those letters into his Enigma machine which would spit out a tape with the decoded message.

When the war in Europe began in September 1939, it was Polish intelligence analysts who were farthest along in breaking the Enigma. When Poland surrendered, these analysts escaped to England where they jump-started British code breaking efforts. The work was incredibly difficult. Each day there was a new code. Eventually, the British captured some Enigma machines but even with them, they did not know the daily settings for the six dials on the machine. The British, joined later by Americans, used brute force brain power aided by an early computer to “break” the code each day. They mostly succeeded although not every day. They got better as the war went on.

Winterbotham in The Ultra Secret emphasized the importance of safeguarding the Ultra intercepts and everything about them because if the Germans learned that their code had been broken, they would have replaced Enigma with a new system and the Allied code breaking efforts would have to start from scratch. Such a disclosure would have prolonged the war and cost countless lives.

Because I had become familiar with this history while still in high school, when I went into the U.S. Army in 1980 as an intelligence officer with a Top Secret/Special Compartmented Information clearance, I took the obligation to safeguard the information especially seriously. So did everyone around me. That was part of the culture ingrained in us. Even today, almost 40 years since I was “read off” from classified information, I still don’t talk about it.

With that as background, I find the recent news that former President Trump kept hundreds of highly classified documents at his home in Florida to be stunning. He had no right to those documents. While a President has access to everything and needs no security clearance, that doesn’t continue for an ex-president. If the documents are of the classification levels that have been reported, the reckless handling of them by Trump and his associates demonstrate a complete disregard for US security. That disregard is reinforced by the “President Trump had a blanket order to declassify anything he handled” assertion by Trump’s defenders. First, there is no evidence that was the case and second, if it was the case, it demonstrates a complete abdication of responsibility for US security. Even if true, the sole reason for such a blanket declassification order would be to excuse Trump from criminal liability for mishandling classified information. There’s absolutely no regard for what harm might be caused to US security interests by such a blanket declassification. Like so much else about Trump and his cult, concern for national security is just another prop to be used against opponents and ignored when it comes to him.