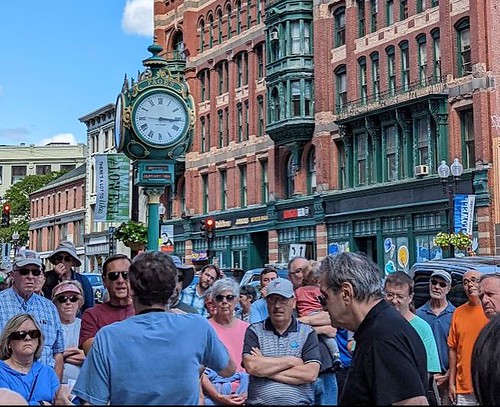 This is the second half of the script I used when giving my Founding of Lowell guided walk on Saturday, August 13, 2022. Part I of the script is available here.

Lowell High School was born in 1831 so it’s outside our scope but I mention it to point out that public education was very important to the early residents of Lowell, especially to Rev. Theodore Edson. Kirk Boott thought a few years of schooling adequate to prepare young people to work in the mills, but Edson and others were more aspirational, and it was a frequent source of conflict. The proponents of education wanted more schools; the mill owners wanted lower taxes.

Taxes were a big reason the mill owners wanted to separate from Chelmsford and get their own town charter. Once the mill buildings went up, they generated a huge amount of tax revenue for Chelmsford. Most of that money was spent in other parts of the town. So besides the practical considerations of not having to travel a considerable distance to Chelmsford center to attend meetings and transact government business, there was a fiscal motive: the voters of Chelmsford were happy to extract substantial tax revenue from the mills and related properties without sending much of that revenue back in the form of services.

Consequently, in 1826, the Massachusetts General Court granted the mill owners’ petition to separate off from Chelmsford as a separate town. They called the new community Lowell in honor of Francis Cabot Lowell, the visionary who inspired the mill colossus being built here but who died in 1817 at age 42. The original boundary of Lowell was the Merrimack River to the north; the Concord River to the east; the Billerica town line to the south; and (approximately) Stevens Street to the west. This was very close to the old Wamesit grant from 1653. That meant when Lowell came into existence in 1826, it consisted of downtown, the Acre, South Lowell, and the Lower Highlands.

Kirk Boott was born in Boston in 1790. His father was a wealthy merchant who had come from England. Young Kirk spent many years working in his father’s office, so he had considerable aptitude with business practices and finance. He briefly attended Harvard but the classical education offered there wasn’t a good fit so his family sent him to a military college in England. After graduation, Boott became an officer in the British Army and fought in Spain during the Napoleonic Wars.

In the 1800s, military officers were trained as civil engineers because they would be responsible for building fortresses and digging entrenchments. The leap from forts and trenches to mills and canals was not a great one so when Boott, who had left the British Army and returned to Boston, expressed an interest in working for the funders of this new mill complex, they hired him. Kirk Boott, just 31 years old, was essentially the general manager of Lowell.

One of the perquisites of being a mill executive was company housing although Boott did not live in the row houses on Dutton Street. Instead, he had a mansion custom built just to the east of the new mill. Although the roads came later, the Kirk Boott house was at the intersection of French Street and John Street. (When Boott died in 1837 at age 47, his house was moved up Merrimack Street and used as the “corporation hospital”. A new mill complex was constructed where Boott’s house had originally stood. The new complex was named Boott Mills in Kirk’s honor.

Just before mill construction began in 1822, all the land from University Crossing to the Lowell Memorial Auditorium was owned by three men: Moses Cheever owned from LeLacheur Park to Tsongas Arena; Josiah Fletcher owned from Tsongas Arena to Bridge Street; and Nathan Tyler owned everything between Merrimack Street and the Pawtucket Canal from the Concord River to Cabot Street. Because all of this land between the Pawtucket Canal, the Merrimack River, and the Concord River was owned by just three men, it was easier for Kirk Boott and his associates to purchase the land they needed and more.

STOP 9 – CORNER OF MERRIMACK AND PRESCOTT

The “Central Bridge” which was the name of the first bridge across the Merrimack River on Bridge Street (where the Cox Bridge now stands) was not constructed until 1826. Prior to that, everyone relied on a ferry to cross the Merrimack at that point. A man named Bradley ran the ferry. He also operated a hotel.

When you study the history of Lowell in its early days, you find numerous hotels, nearly a dozen of them. But these hotels were mostly good-sized houses that rented space in a bed to travelers and provided meals and beverages. East Chelmsford in the years before Lowell (and Wamesit before that) was incorporated was an important transportation hub for the entire region. Even before the Pawtucket and Middlesex Canals were constructed, many of the roads coming from New Hampshire and Vermont logically passed through this area as goods were transported to and from Boston and Salem, the two major ports in Massachusetts. Travel from the interior to the coast was a multiple day journey so many layover places were needed along the way. This was one of them. When the two transportation canals opened, especially the Middlesex Canal, the hospitality business became even more important.

One of the most prominent houses in that area and in the entire region was a mansion located where the Saints Campus of Lowell General Hospital now sits (formerly known as St. John’s Hospital). This large house had had several owners but by 1826 it was the home of Edward St. Loe Livermore who invested heavily in beautifying the 200-acre estate that came with the house.

Livermore was born in Portsmouth, New Hampshire and became prominent in that state’s legal community. For many years he served as the Rockingham County Attorney (the equivalent of our DA). Later in his career he moved to Boston, went to Ohio for a few years, then returned to Boston. When he retired from the legal profession, he moved to Tewksbury to the mansion described above. Because of its location on a high hill overlooking both the Merrimack and Concord Rivers, Livermore called his home Belvidere which is derived from two Italian words: “bel” which means beautiful and “vedere” which means view. Belvidere had come into common use in England as a name for large houses with great views. In Lowell, the name Belvidere eventually was used to describe the entire neighborhood.

This is the terminus of the Pawtucket Canal at the Concord River. The double lock chamber here, called Lower Locks, handles the final elevation drop of the 32-foot difference between the Merrimack and the Concord.

In 1822, there was a small cotton mill owned by Thomas Hurd at this site. This mill, like a number of others, was much smaller than the great mills soon to be built along the Merrimack, and only handled part of the textile manufacturing process. Hurd became a thorn in the side of the big mill owners since he refused to sell his property and his water rights to them. Eventually he did, at a premium price, and the Middlesex Mills was eventually constructed where his once stood (on the site of the UMass Lowell Inn & Conference Center). The Middlesex Mills was the only large mill complex in Lowell to originally handle wool. (Other woolen mills sprang up on both banks of the Concord and during the Civil War some of the major mills would weave woolen cloth due to shortages of cotton).

One Response to Founding of Lowell Walk, part II