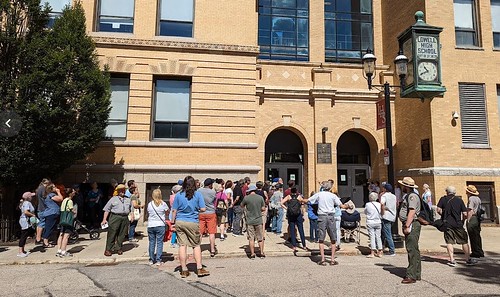 Yesterday morning I led a Lowell Walk from the National Park Visitor Center. The topic was The Founding of Lowell. We talked about what was here before Lowell received its town charter in 1826 and how that charter came about. I’ve typed my notes into a “script” and will share that in two parts, one today, the other tomorrow so please check back then for the rest of the story.

Lowell received its town charter in 1826 which means we are rapidly approaching our bicentennial. But English immigrants had already lived here for 170 years by that point and the Indigenous people for much longer than that. My objective on today’s walk is to give an overview of what happened during those 170 years with an emphasis on the years just before the town charter.

Rivers were the highways of 17th century America. They were the only way to transport large quantities of things over long distances. The Merrimack and Connecticut Rivers were the two main routes to interior New England. Because trade was essential to the survival of the English colonies, harvesting timber in the forests of New Hampshire and bringing it out to the Atlantic Coast was big business in colonial America.

Giant logs would be cut, bundled together to form big rafts, and then floated down the Merrimack to Newburyport which was a leading port and a center of American ship building. But the Pawtucket Falls and their 32-foot drop made the Merrimack and imperfect transportation route. The falls were too long, rocky, and rough to simply float the logs through them. Instead, the logs had to be pulled out of the river above the falls, dragged by teams of oxen below the falls, and then put back in the river to continue to Newburyport and the Atlantic Coast.

That’s how things stood from the first English settlement in 1653 up until after the American Revolution. But then everything changed.

Right after the Revolutionary War, a big thing in America was “internal improvements” which today we call transportation infrastructure projects. Back then, it wasn’t high speed rail or airport terminals, it was canals.

In 1792, the Massachusetts Legislature granted a corporate charter to the Proprietors of the Locks and Canals on Merrimack River. The proprietors were a group of Merrimack Valley businessmen who stood to profit from making the passage on the Merrimack easier. They would build a transportation canal that bypassed the Pawtucket Falls and use lock chambers to handle the difference in elevation of the river above and below the falls.

They called it the Pawtucket Canal. It left the Merrimack River near UMass Lowell’s South Campus and then followed an existing stream called Speen’s Brook which arced through today’s Acre until it reached a swampy area in what is now the Hamilton Canal District. From there it continued and entered the Concord River behind the UMass Lowell Inn & Conference Center. At first, there were just two sets of locks: the Swamp Locks in the Hamilton Canal District and the Lower Locks right at the Concord. Eventually, two other locks were added. One was the Guard Locks which was closer to the start of the canal; the second was the Minx Locks which was midway between the Guard and Swamp Locks.

The first big textile manufacturing company came here in late 1821. I’ll talk about that at our next stop but the first mill complex was to be called the Merrimack Manufacturing Company and it’s not on the Pawtucket Canal. Instead, they dug an entirely new canal to power this new mill complex. They called the new canal the Merrimack Canal. To dig it and to help construct the mill buildings, the industrialists recruited a bunch of Irish immigrant laborers from Charlestown, Massachusetts. The intent of the mill owners was to have the Irish leave once the mill and canal were built but the demand for laborers persisted and the Irish never left. They needed someplace to live so the mill owners gave them an acre of land to the southeast of the Merrimack Mills. And that’s how this neighborhood got the name “the Acre.” The sculpture behind you is called The Worker and it honors all the immigrants who came to Lowell for employment.

When the Pawtucket Canal opened in 1796, it worked as intended. Boats and timber rafts used it to by-pass Pawtucket Falls, happily paying the toll charged by the Proprietors of Locks and Canals. But the cost of maintaining the canal consumed all the profits of the company. When the competing Middlesex Canal opened a few years later, all the river traffic diverted to it since it was more lucrative to ship goods to Boston than to Newburyport. The Pawtucket Canal basically went out of business.

That’s how things stood in November 1821 when Ezra Worthen, Paul Moody, Patrick Jackson, Nathan Appleton, and Kirk Boott visited Pawtucket Falls and decided this was the perfect site for the major manufacturing endeavor they were planning. They engaged a local real estate agent to discretely buy the stock of the Pawtucket Canal and almost all the land between it and the two rivers. As we discussed at the last stop, they began work on the new power canal and the new mill complex the following spring.

One reason the mill owners were able to acquire all this land was that very few people lived here. Long before any Europeans came, this was a Native American village. It consisted of downtown and most of the Acre and, on the other side of the Concord River, all lower Belvidere. In 1653, the Massachusetts General Court granted the Native Americans a town charter for Wamesit which included all of their village on the downtown side of the Concord. (The portion of the Native American village on the other side of the Concord became part of Billerica which later became Tewksbury). The same day, a group of English families from Woburn were granted a charter for land west of here. They called their town Chelmsford.

The primary concentration of English in this area was at Middlesex Village which is outer Middlesex Street at Hadley Field and the Rourke Bridge. They were mostly in the service business because Middlesex Village was the 18th century equivalent of a highway rest stop for those moving cargo down the Merrimack but also for the hundreds of teamsters who steered wagons from interior New England towards Boston.

I’m telling this part of the story now because this road in front of you, Merrimack Street, was one of the few roads that existed back then (although it wasn’t called Merrimack Street). It started in Middlesex Village and ran along the river. It would be today’s Middlesex and Pawtucket streets, however, it went to the right of University Crossing. What do we call that road? Salem Street, because it was the route to Salem. Salem Street continued to Cabot when it turned to the left but then immediately turned to the right onto what we know as Merrimack Street. It then continued right past here and crossed the Concord River on one of the region’s earliest bridges. The only other roads in this entire area were School Street to the west and Gorham Street to the east.

One of the requirements of a town charter in early New England was to construct a church. By the 1820s, that was no longer a legal obligation, but it was a cultural one. It was also part of the business plan of the mill owners. Farmers would be more likely to allow their daughters to come live and work in this new place if they were assured the daughters would attend church.

The church’s cornerstone was laid in May 1824 and the church opened in 1825. Reverend Theodore Edson was the first minister.

When construction of the Merrimack Manufacturing Company began in 1822, only a couple of dozen people lived here. The mill owners had to import their mill operatives. Their plan was to recruit young women from the farms of New England. They would work in the mill and worship in the church, but they also needed a place to live and so the mill owners built housing for their employees. This worker housing was partly a marketing effort, but it was also a way to distinguish American industry from that in England where workers lived in squalid conditions. The utopian vision of the mill owners lasted for as long as their mills were profitable, but they were sincere at first.  The mill owners also dedicated the strip of grass between Anne Street and the canal as a public park. When the Lowell High addition was bult in 1920 and Anne Street was abandoned, the original park expanded to include all this green space which is named for Lucy Larcom, a former mill worker.

TO BE CONTINUED TOMORROW