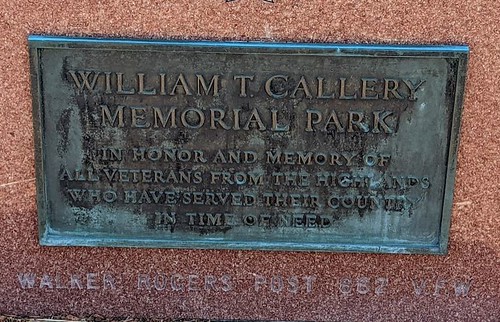 Plaque on the William Callery Memorial

William Thomas Callery was born on August 16, 1945, in Lowell. His parents, Francis A. Callery and Mary T. Callery, eventually moved the family to 134 Parker Street which was just a few blocks from Tyler Park. William had four siblings: brothers Francis T. and John J. and sisters Sheila F. (Kearns) and Mary Gail.

William graduated from Lowell High School in 1963 and then attended Andover Institute of Business in 1964. He was working at Hanscom Air Field in Bedford when he was drafted into the Army. He was trained as an infantryman and was assigned to Company A, 2nd Battalion, 18th Infantry Regiment of the 1st Infantry Division.

The 1st Infantry Division, famously known as “The Big Red One” for the red number one on the unit’s shoulder patch, was deployed to South Vietnam in 1965 and would stay there for five full years. The division’s area of operations was to the west of Saigon where it fought elusive Viet Cong units and larger outfits of the North Vietnamese Army which had infiltrated through Cambodia on the Ho Chi Minh Trail.

William Callery began his tour in Vietnam with the 1st Infantry Division on January 19, 1966. Thirty-four days later he would be dead.

At about the time Callery arrived in Vietnam, U.S. intelligence detected large numbers of enemy troops gathering in the Michelin Rubber Plantation and the adjacent Boi Loi Woods which were within the 1st Division’s area of operations. The Michelin Rubber Plantation was a 31,000 acre rubber plantation established by the Michelin Company in 1925. It was located midway between Saigon and the Cambodian border so it was a prime staging area for the Viet Cong as was the adjacent Boi Loi Woods.

On February 21, 1966, the 1st Division launched Operation Mastiff which was a massive operation designed to encircle and then destroy the Viet Cong and North Vietnamese. That morning, 142 helicopters air lifted two brigades (including Callery’s company) around the perimeter of a 100 square kilometer box in which the enemy was thought to be hiding.

Once the perimeter of the box was secured, individual U.S. battalions attacked into the center to destroy the enemy. The Americans found base camps, training areas, hospitals, and large caches of food and ammunition, but few enemy troops. Showing an elusiveness that characterized the Viet Cong throughout the Vietnam War, the Viet Cong troops had moved out of the area before the Americans arrived.

Historians have deemed Operation Mastiff a “major disappointment” since only 61 enemy troops were killed, 40 of them in a single air strike. American losses totaled 17 killed and 94 wounded. Tragically, one of the dead was William Callery who was fatally hit by small arms fire on February 22, the second day of the operation.

William Callery’s body was returned to Lowell. His funeral was held on Saturday, March 5, 1966, at St. Margaret’s Church. He was buried in St. Patrick’s Cemetery. Many attended his funeral including delegations from VFW Post 662 and American Legion Post 87, as well as a contingent of active duty troops from Fort Devens.

Shortly after Callery’s funeral, VFW Post 662 requested the city council to rename Highland Park in Callery’s honor. The council referred the request to the Parks Commission which unanimously approved it. (The 5.5 acre Highland Park which was bounded by Stevens, Parker, Wilder and B streets had been acquired by the city of Lowell in 1922).

A dedication ceremony was held at the park on May 22, 1966. Governor John Volpe, Congressman F. Bradford Morse, numerous city and state officials, members of the clergy, veterans organizations, and more than a thousand members of the public joined Callery’s family in a moving ceremony (which I was fortunate to attend) that took place at the corner of B and Stevens Street where a monument in Callery’s honor was erected. 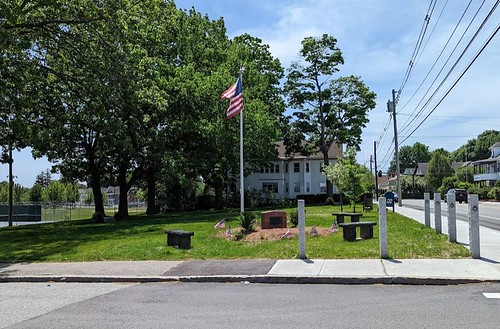 Callery Memorial at corner of B and Stevens streets in 2022 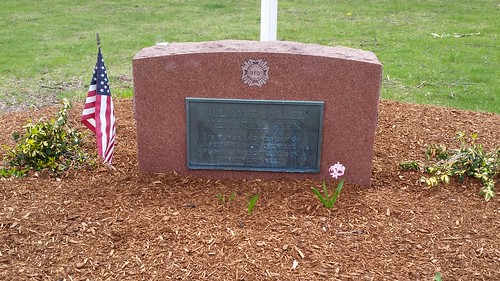 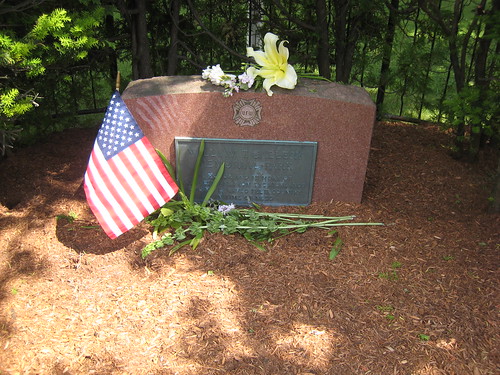 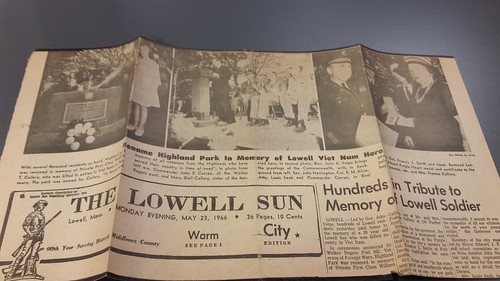 Newspaper from the Callery Park dedication