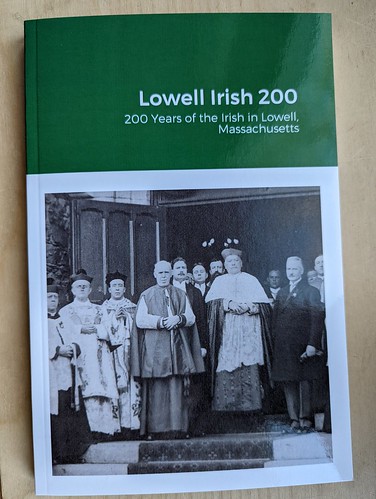 Lowell Irish 200: 200 Years of the Irish in Lowell, Massachusetts

Two hundred years ago Hugh Cummiskey, an Irish immigrant living in Charlestown, Massachusetts, led a group of his countrymen on a 30 mile walk along the Middlesex Canal to the sparsely settled farming community of East Chelmsford. Cummiskey had heard that a group of Boston entrepreneurs intended to build a canal-powered textile mill on the bank of the Merrimack River and assumed that laborers would be needed to help with that task. He was right.

The industrialist cohort led by Partick Tracy Jackson, Nathan Appleton, and Kirk Boott immediately put the Irish to work enlarging the Pawtucket Canal, digging the new Merrimack Canal (which runs along Dutton Street and through the Lowell High campus), and constructing the Merrimack Manufacturing Company, the first of the great textile mills in the place that became Lowell.

Lowell’s founders thought little of the Irish beyond their utility as laborers and expected them to depart when construction was completed. But by the time the last of the big mills was completed nearly 20 years later, the Irish had established themselves in great numbers as permanent residents of the community. They stayed and never left.

To commemorate the bicentennial of the arrival of the Irish in this city, a group of local historians have collaborated to write Lowell Irish 200 which explores the contributions of the Irish in education, labor, politics, culture, and everyday life. The book is edited by David McKean and Richard Howe with chapters by Gray Fitzsimons, Robert Forrant, Joyce Burgess, Christine O’Connor, and Walter Hickey, plus McKean and Howe.

The cost of the book is $19.99 and it’s available from Amazon or from Lulu.com.

As a preview, here is Dave McKean’s Introduction to the book:

In October of 1921 an article appeared in the Lowell Sun entitled “Plan Big Celebration.” It talked about a few sons and grandsons of Lowell’s original pioneers were planning to celebrate the centennial of the arrival of the Irish in East Chelmsford (later to become Lowell) in 1822. Chief among them was John Green, whose own father was among the first Irish who settled in Lowell and who was the gardener for Kirk Boott. They reminisced about the story they had undoubtedly been told time and time again of Tyrone man, Hugh Cummiskey, and his 30 Irish laborers walking up to Lowell on April 6, 1822, meeting Kirk Boott, having a quick libation, and going straight to work. As they sat there telling and retelling the tales of the forebears, they questioned if the anniversary would be remembered and how to celebrate 100 years of Irish presence in Lowell. The older gentlemen thought it would be well for the younger generation to take the lead and plan a grand celebration. They hoped to see a 3-day celebration replete with “a big parade of the all the Irish societies, exercises in the Catholic schools, the reading of historical essays, the delivery of orations, interspersed with music, the erection of historical markers or tablets . . . culminating in a grand banquet where descendants of the pioneers would preside.”

History tells us that their dreams never quite came to fruition.

The story of Lowell’s Irish community is the story of America. Like each group that comes to the United States, they brought their hopes and dreams, they met challenges and trials, they rose through hard work and a belief in the American dream. They became American while holding onto their past. Someone once described history as a jigsaw puzzle, only there are missing pieces. The story of Lowell’s Irish is that jigsaw puzzle. We think we understand the story, but we can’t see the whole picture.

The year 2022 celebrates the bicentennial of those first Irish coming to Lowell. The story we were told 100 years ago has changed somewhat, has become more accurate. Research has taught us so much more about the story of Lowell’s Irish community. Who was this man, Hugh Cummiskey? What can archaeology tell us what it was really like to live in the Acre 200 years ago? What was it like to be a laborer or a child in this period?  And what does it mean to be Irish American today?

In 1920, George O’Dwyer published his first history of the Irish in Lowell, Irish Catholic Genesis of Lowell. It was written at a time of rising Irish sentiment after the Easter Rising. O’Dwyer’s research, in places a little sketchy, should not be ignored but should be considered in the context of all that is known now. It is another piece of that puzzle.

Since O’Dwyer’s publication 100 years ago, much has happened to tell a more accurate story of Lowell’s Irish community. Dr. Brian Mitchell published The Paddy Camps, a detailed account of Lowell’s Irish pioneers. Dr. Colm Donnelly and Dr. Eileen Murphy have carried out archaeological excavations in the Acre and St. Patrick Cemetery. Volunteers have collected volumes of accounts of early Irish in Lowell all leading to a clearer and truer view of what life was like for our early forebearers.

Like the gentlemen who gathered in 1921 to contemplate the centennial of the Irish in Lowell, we too wondered how to celebrate Cummiskey’s bicentennial. We thought an appropriate memorial would be to tell his story and the story of the Irish in Lowell in light of all that has been learned during the intervening century. To them and to those who will come after us, we say “We remember.”