What does a poet do when the war is all over the news? He responds, she responds. Writers everywhere are responding to the horrific war in Ukraine, posting new work of their own and sharing poems by Ukrainian poets of today and the past. Artists of all kinds are telling us how they feel, what they see, who they are thinking of, what we can do. Jane Brox says we write to organize our response to world, and Tom Sexton says he writes because it’s what he can do.

Bill O’Connell lives in the Pioneer Valley of Massachusetts between the Connecticut River and Quabbin Reservoir. Bill is a recent winner in the Atlantic Currents II writing contest for his poem “When We Were All Still Alive,” the title poem from his new book from Open Field Press, which is available at SPDBooks.org. His other books are Sakonnet Point and On the Map to Your Life. Bill is a graduate of UMass Lowell, with a master’s degree from Colorado State University. He has a poem forthcoming in The Lowell Review 2022, due this month. 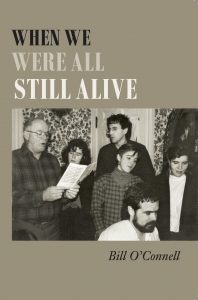 Today we will learn what went on

in the war while we slept

far from the whistle and boom

of Grad rockets on Kiev —

what flying steel will do

to concrete, families in basements

hanging on. I saw it

in my mind and on

the laws of physics splattered,

a family with suitcases

shocked to death by a blast.

No darkness without the lit places —

the downtown of the mind defended

by partisans. In the movies the invaders

appear from the skies, the myth

of the next great coming —

without senses but sensors

we outwit and explode

to planets we can only imagine, seek

to go there and destroy.

No one slept in Kiev last night

where it is night again as we wake

to tune into CNN to view

the damage. Clucking our tongues

at the invaders, rivers of grief, cities

in real time, no hero coming

to save the day

but heroes none the less

My body thinks the mind knows something.

I didn’t want to own anything but

me a lifetime ticket

and wrapped me up in it

I tell my students, is how we

Get it? Breaking News: Ukraine, Man’s

Inhumanity To Man. Next up we speak

with a shell-shocked retired general brought to you

by elderly ailments and Botox.

Tired of war? Boost up

with Botox. People will notice!

People will swipe left with worn out fingers.

Here’s Joe Namath with a number to call:

I bought a silver bullet

with a pill inside. Take it, Joe said,

The View From Here

I’ve had too much of Putin

a moonscape so I

shut off CNN and go up

to my wife) to listen to

Miles & Trane and then

into notes and space to filter

what comes to me through T.V.

and the Net: endless

as the human condition

then Coltrane comes in

after Adderley to take

with an Albany accent —

the rhythm of shelling,

the people in the subways