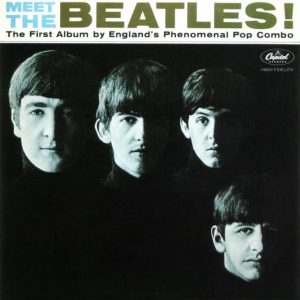 THE AIR CRACKLED as my fifth-grade classmates hung up their coats on the metal racks in the back of the room at St. James School.

“Did you see Ringo’s rings?”

“Did you see their hair?”

I was confused. I had no idea what anyone was talking about. I asked my neighborhood friend Jim, “What’s going on?”

“Don’t you know? You mean you missed it? The Beatles!”

It was the morning of February 10, 1964. The Beatles had made their debut on The Ed Sullivan Show the night before. Seventy-four million people-including, it seemed, all my classmates–had seen the Liverpool based quartet perform five songs on the early evening variety show.

Jim had tipped me off Saturday when he saw me at the Haverhill Lanes. His older sisters had informed him that everyone needed to watch “The Beatles.” When I asked Jim what “The Beatles” was, he said it was a group from England.  Although I didn’t quite understand what he meant by that, I didn’t ask for details; I figured it might be some type of movie like Alfred Hitchcock’s The Birds—but with insects.

I skipped the broadcast.

Fortunately, I made sure to watch when The Beatles performed six songs on The Ed Sullivan Show the very next week.

The performance captivated me. I loved how the band members bounced in front of the microphones as they shook their heads from side to side. I noticed their faces lit up as they sang; I’d never seen singers look that happy. I wanted to sing along with every song.  When the show was over, I remembered bits and pieces of refrains:

“Send it along with love from me to you–to you!”

I walked to Record Lane on Merrimack Street in Haverhill to look at Beatles records.  I found copies of two albums, Meet the Beatles and Introducing the Beatles, displayed in metal wire wall racks.

I reached for a copy of Meet the Beatles. I liked the cover photo of the Beatles’ shadowed faces suspended in a bed of black. I checked the track listing; I recognized three songs: “I Want to Hold Your Hand,” “All My Loving, and “I Saw Her Standing There.”

I picked up a copy of Introducing the Beatles. and skimmed the song titles.  The only song I’d heard of was “I Saw Her Standing There.” Then I saw the price tag: $3.98.

I shoved that record back into the rack and walked out the door.

As I stepped past Record Lane’s front display window, an album with a blue and white cover caught my eye: The Bearcuts Swing in Beatlemania. The word Beatlemania made me curious. I headed back into the store and asked the clerk to let me look at the album.

I smiled at the cover illustration—four white faces with black bangs attached to insect like shells with six legs. The album listed three of the songs The Beatles had sung on the second Ed Sullivan appearance plus some songs I’d never heard of including “Your Barber is a Beatle Too.” When I saw that the album only cost ninety- nine cents, I brought it to the counter.

The clerk wanted to make sure I realized that the record I was buying was not in fact The Beatles. “But,” he assured me, “It does have most of their best songs.”

Since I had never heard an actual Beatles’ record, I didn’t know the difference between the sound of The Bearcuts and The Beatles. I played my new record’s Beatle songs over and over. The words and melodies stuck in my head. I sang the songs to myself throughout the day.

When I was alone, I belted out the words. My spirits soared. I wondered if the happiness

I felt was joy.

Jim was not impressed when I told him about my Bearcut album.

It was mid-summer before I decided I would buy an actual Beatles album. I had the money; I’d started delivering papers for the Haverhill Gazette; I had sixty customers and made six dollars a week.

I was surprised when I walked into the record department at Mal’s Department Store.

Besides the albums I’d seen in Record Lane, there were now three other Beatles albums to choose from.  Something New had a splashy color picture of the group performing on The Ed Sullivan Show; it didn’t have a single song I recognized. A Hard Day’s Night had a red cover with black and white photos of band members on the front; I hadn’t heard any of the songs on that album either.

I perused a copy of The Beatles Second Album. The title confused me since I remembered seeing two other Beatles albums months before. When I only recognized “She Loves You” in the song listings, I considered walking out of the store empty handed.

But the cover intrigued me. There were a dozen photos on each side. There were shots of band members performing, pictures of individual faces, a picture of the band being interviewed…

I turned the record over again and again pondering the photos.

Since Mal’s was a discount department store, the record was priced at only $2.67.

From the charged guitar notes introducing the first number, “Roll Over Beethoven,” to the final salvo of “She Loves You,” the album electrified me. The Beatles sound was immeasurably brighter and more brilliant than The Bearcuts’ renderings.

I stared down at the disk as it turned on my monaural record player. I loved how the rainbow band on the edge of the label looked as it circled round and round. Even watching a Beatles’ record revolve on a turntable fascinated me!

Later that night, I took the disc in hand and read the label. I deduced that the names in parenthesis under each song title must be the songwriters. Six songs had been written by John Lennon-Paul McCartney, two of the Beatles; the other five songs had been composed by people I had never heard of.

Chuck Berry wrote “Roll Over Beethoven.” “You Really Got a Hold on Me” was credited to W. Robinson.  Someone named Holland penned “Please Mister Postman.” Drapkin contributed “Devil in Her Heart;” Berry, Gordy, and Bradford wrote “Money.” And the explosive song on the entire record, “Long Tall Sally, had come from the trio of Johnson, Penniman, and Blackwell.

I wondered who these songwriters were. Had they written other songs too?  Did any of them have their own bands?  Had other singers and bands recorded these songs?

The Beatles Second Album sprouted a lifetime interest in songwriters. Within twelve months I’d discover Chuck Berry credited on songs by The Rolling Stones, The Dave Clark Five, and The Animals; I’d learn that one of writers of “Long Tall Sally”—Penniman—was Little Richard; W. Robinson was Smoky Robinson who first recorded “You Really Got a Hold on Me” with his group The Miracles.

I memorized the words to every song and sang them throughout the day to myself. Sometimes, when I was alone pedaling my bicycle on my paper route, I shouted them to the skies.

For the first time, I had a soundtrack for my life.

When I told Jim how much I loved The Beatles Second Album he was not impressed.  “That record is so old. You should have got Something New or A Hard Day’s Night.”

But, by that time, I was so engrossed with the songs- including songs he had never yet heard—that I didn’t care. The fact that I loved the album was what mattered- he was missing out.

There would be plenty of time to listen to Something New, A Hard Day’s Night, and much, much, more.

More time and music in fact, than I ever imagined.