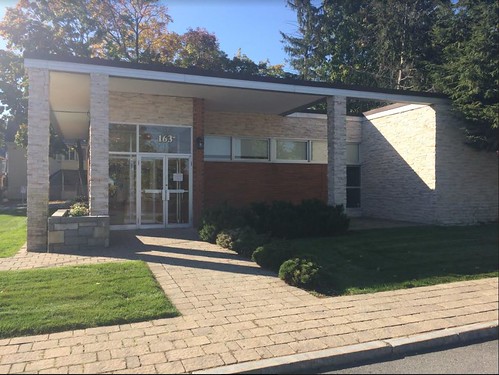 Lowell’s nineteenth-century architecture dominates its skyline and the history books. But as the city grew in the 20th century, and as the mills themselves started to close, new industries and institutions, and new growth in residential neighborhoods, required new buildings. Many of the notable structures of the mid-twentieth century can be traced back to one architect: Eugene Weisberg (1917-1970). Weisberg, the son of Russian-Jewish emigres, grew up at 19 Summit Street; his father, Norman, operated a wholesale groceries business at 145 Thorndike Street. Weisberg left Lowell to earn his degree in architecture at MIT in 1938. In the 30s, MIT instructed students in the “International Style”—a style of clean lines and no historic ornament. Weisberg’s classmates included such renowned figures as I.M. Pei who went on to design the Hancock Tower in downtown Boston. Weisberg served in World War II as a lieutenant in the Navy and also worked for a number of Boston architecture firms before returning to Lowell. He set up his office in the Fiske Building on Central Street where he soon established a thriving practice. He designed a house for his parents on Westview Street in Lowell; and he married Hester Marmer with whom he had two children. (Hester worked for years as a librarian at Pollard Library.) His earliest works in Lowell included the Waldimer Pontiac car dealership on Middlesex Street (1953, now the home of the Lowell DPW), and a remodeling of the Lemkins clothing store on Merrimack Street in 1952. 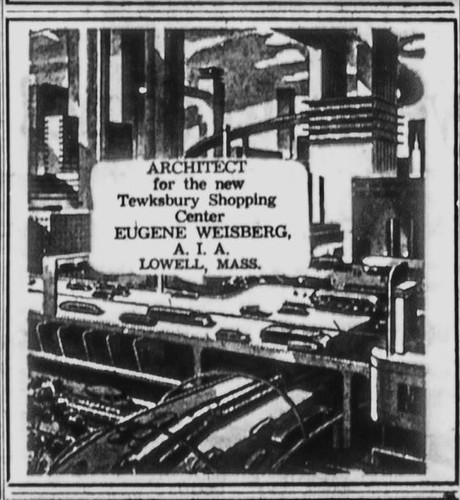 By the mid-50s he took on much larger projects: the Temple Beth-El Community Center on Princeton Blvd., and a series of branch banks for Union National Bank (pictured at beginning of post). His futuristic, Jetson-like design for Tewksbury Shopping Plaza (pictured immediately above) indicates his lofty goals to bring Modernism to the Merrimack Valley. By the 1960s he joined with Lowell realtor/developer Van Greenby to design a series of houses along Lincoln Parkway and adjacent streets in the Highlands neighborhood. He also became actively involved in Lowell’s Citizen Advisory Committee for Urban Renewal from 1961-69.

Outside of Lowell, Weisberg’s buildings included a synagogue in Manchester, NH, a country club in Dartmouth, MA, and a radio station in Medford, MA.

Weisberg died at the age of 54, just as his design for a bank building at 489 Merrimack Street began construction. This building still operates as a branch for Santander Bank today.

The Lowell Historic Board features Weisberg as one of the city’s “Architects of Note” on its website.

I would greatly appreciate it if anyone with information about Eugene Weisberg, especially photographs or drawings of his work, would get in touch with me (Marie Frank) at Marie_Frank@uml.edu.