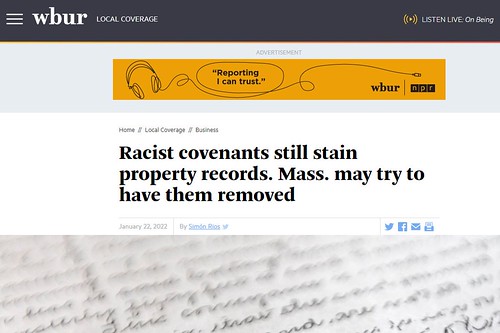 On Sunday, WBUR (Boston’s NPR radio station) posted a story about race or ethnic-based restrictive covenants in Massachusetts land records. The story also ran in Sunday’s Lowell Sun and was on the air and online from WBUR on Monday.

Today I’ll supplement that story with additional information about the documents mentioned and how the story came about from my perspective.

Last summer I received an email from WBUR’s Todd Wallack asking if I had ever come across a deed with a restrictive covenant that barred the sale of the property to another based on race or ethnicity. I said I knew of a couple of them and sent him examples.

One was from a deed from 1881 for property in Fairmount Street in Lowell. Here’s the relevant line:

The said premises being deeded under the express agreement and condition that the land shall never be deeded or conveyed to any person born in Ireland.

WBUR’s Simon Rios took over from Wallack and thoroughly reported the story that appeared this week.

When I became register of deeds in 1995, I found a list of a dozen documents that had “interesting” content. I’m not sure who compiled the list, but it described the verbiage and book and page citation of each document. There were several with race or ethnic based restrictions that caught my attention. I found them in our record books, made copies of them, did some preliminary research then set them aside.

I knew that deed restrictions of this type have typically disappeared from subsequent deeds in the chain of ownership and that such restrictions are no longer enforceable. Nevertheless, real estate law is complicated and once a restriction is created it can legally linger even if it is otherwise unenforceable.

WBUR’s interest caused me to dig deeper into the story of these documents, especially the one cited above. As is often the case with Lowell, many threads of the city’s history came together in this one parcel of land. 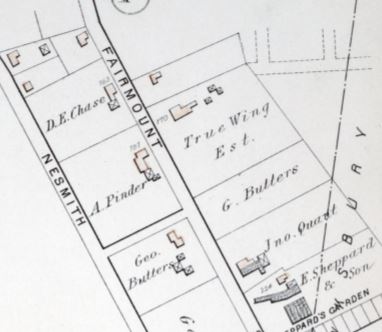 The above section of the 1879 Lowell Atlas shows the parcel that had the restriction placed on it. It’s a vacant lot on the east side of Fairmount Street labeled “G. Butters.” Immediately across Fairmount Street is the home of George Butters. The unmarked road next to the Butters home that connects Fairmount to Nesmith Street is today’s Meryl Drive.

George Butters was born in Vermont in the 1820s. After marrying Susan Felch in Vermont in 1851, the couple moved to Lowell. George operated a successful livery stable near the train station that is now the Middlesex Community College Performing Arts Center at Central and Green Streets (a building many of us know as the Rialto). Mr. and Mrs. Butters also owned a home on the west side of Fairmount Street. They had three children: George Jr., Charles, and Eleanor.

George Sr. died in 1880 and the following year his widow Susan and their children, George Jr. and Eleanor, sold the vacant lot across the street from the home still occupied by Mrs. Butters. This is the deed that contained the “No Irish” restriction.

The buyer of the property was Abel Atherton, a machinist and inventor who held several patents on textile-making machinery. Atherton held onto this vacant parcel until 1887 when he sold it to Arthur Bonney.

Arthur Bonney was a lawyer, the Lowell City Solicitor, and a Superior Court judge. He compiled adjacent lots on Fairmount Street, including the one from Butters with the deed restriction, and merged them into a single parcel with a magnificent house that became known as The Bonney Estate. 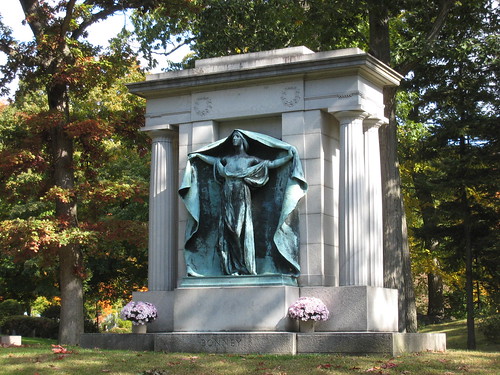 Those of you who have been on my Lowell Cemetery tour may recognize the name Bonney from the monument shown above. Judge Bonney and his wife, Emma, had one child, a daughter named Clara who was born in 1855. In 1891, Clara married Charles Sumner Lilley, a judicial colleague of her father. Clara and Charles had one child; a daughter named Clara B. Lilley. Shortly after the birth of her daughter, Clara developed tuberculosis and died in 1894 at age 39. Her death devastated her husband and father (her mother had died two years earlier) so they retained a nationally known sculptor, Frank Elwell, to create a unique monument for Clara. Besides being a beautiful work of art, that monument (shown above) has gained notoriety for other reasons which I’ll leave for another day. 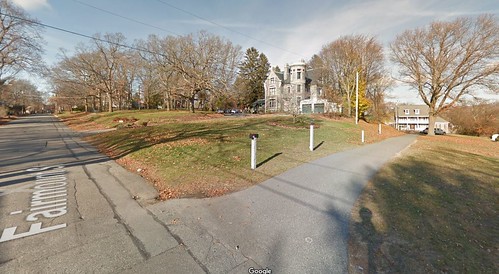 After Clara’s death, Judges Bonney and Lilley continued to live in the Fairmount Street home until Arthur’s death in 1896. Young Clara inherited the property from her grandfather although her father (who lived until 1921) acted as legal guardian of her property until she was old enough to own it herself. Soon after that, Clara married Philip Dunbar of Newton, Massachusetts. Upon the marriage she not only took the last name Dunbar but also began using her middle name – Bonney – as her first name.

After the death of her father in 1921, Bonney Dunbar (formerly known as Clara Bonney Dunbar) put the Fairmount Street property up for sale and in 1925 conveyed it to Charles Brooks Stevens and Edith Ames Stevens.

Commonly known as C. Brooks Stevens, the new co-owner was a member of the textile mill-owning Stevens family. Mrs. Stevens’s father was Adelbert Ames who was awarded the Congressional Medal of Honor in the Civil War and served as the military governor of Mississippi during reconstruction. Her mother was Blanche Butler, the daughter of Benjamin F. Butler, a Civil War general, member of Congress, and governor of Massachusetts.

When the Stevens sold the property in 1944, they first subdivided it into two lots; one with the grand Bonney home, the other a vacant lot upon which another house was constructed. In 1957, the subsequent owner conveyed the Bonney house to The Battles Home Corporation which converted it into an upscale residence for single gentlemen. The Battles Home sold the property in 2005 when it was further subdivided which is where it stands now.

As for the restrictive covenant, it only appeared in that one deed and was never repeated by subsequent owners. However, once a covenant is created, it “runs with the land” which means the property is encumbered by it whether it is specifically mentioned in subsequent deeds. But the U.S. Supreme Court has held that any covenant like this is void so even if it continues to “run with the land” it has no legal effect.

Even though it has no legal consequences, should that line be redacted from the records? I say no for at least two reasons: First, our entire system of land ownership is based on the completeness and the reliability of the records at the registry of deeds. If we begin removing portions of those records, we will inject doubt into a system that is widely respected and followed. In our contemporary era where many people consider the truth to be whatever seems convenient for you to believe at that moment, casting doubt about who owns what property is a path we should avoid taking.

My second reason for leaving the records intact is that it is a reflection of our history. This is not like some Civil War statue to a traitorous general that was erected long after the war as an affirmation of white supremacy. These records were created contemporaneously with the events they depict and as such are a primary source of what people thought and said at the time.

We should not erase our history; we should learn from it.