The following was first posted on December 7, 2017. 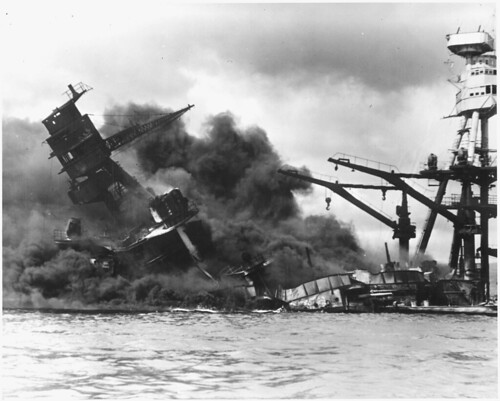 Today is the anniversary of the surprise attack by the Japanese navy on Pearl Harbor. By the time the attack was over, four US battleships were sunk, four more were damaged, 188 aircraft were destroyed, 2402 US service members were killed, another 1282 were wounded, and America had entered World War Two.

A number of men from Lowell were stationed in Hawaii on December 7, 1941, including two who were killed early in the attack. Twenty-three year old Arthur Boyle, a private first class in the U.S. Army Air Force, was killed by a bomb blast at his Hickam Field air base. Navy Seaman Clifton Edmonds was killed by a bomb that struck his ship, the USS Curtiss.

A Lowell resident stationed at Pearl Harbor who survived the attack was Henri Champagne who had enlisted in the Navy in 1940 at age 19. A crew member of USS Phelps, Champagne also participated in the battles of Coral Sea and Midway. After the war, Mr. Champagne, who died in 2006, spent much of his life ensuring that his fellow citizens remember the December 7, 1941 attack on Pearl Harbor.

But why should we remember Pearl Harbor? The heroic acts of those who were there that day are certainly worthy of remembrance, but more importantly, December 7 serves as a lesson, now reinforced by September 11, 2001, that we live in a dangerous world, something we can never afford to forget.

The onset of World War Two also brought a sense of togetherness and shared sacrifice to the United States. This national unity helped America prevail in the war and launched the greatest peacetime economic expansion in history.

Back on December 7, 2008, I was invited to speak at the Greater Lowell Veterans Council Pearl Harbor Remembrance Ceremony (which will be held again today at 10 a.m. at the Lowell Memorial Auditorium). In my remarks, I tried to contrast the shared sacrifice of Americans in the aftermath of the Pearl Harbor attack with a very different response that followed the surprise attack on September 11, 2001. Rereading my 2008 speech now, I am more convinced than ever that had we, as a country, responded to 9/11 the way Americans reacted to December 7, 1941, our country in 2016 would be better off and less divided than it is today.

Here are my remarks from the December 7, 2008 Pearl Harbor Remembrance Ceremony in Lowell:

Thank you for the opportunity to speak to you today.  Three weeks ago, my wife and I traveled to New York City to celebrate our 25th wedding anniversary.  The highlight of the trip was seeing the show “South Pacific” which was terrific.  Another important event in our weekend was visiting Ground Zero, the site where the World Trade Center once stood.  Right now, there’s not much to see.  A big fence surrounds what otherwise looks like any other construction site.  But whatever its appearance, it’s important to physically go there both to remember what happened on September 11, 2001 and to honor those who died that day.

Now the reason I mention this is that I’ve always seen amazing parallels between 9/11 and Pearl Harbor.  In both cases foreigners attacked American targets on American soil; both were complete surprises that found us unaware and unprepared even though our intelligence services, in both cases, had uncovered information sufficient to have allowed us to prevent the attacks; and both cost thousands of Americans their lives.

But I submit to you that there was one enormous difference between December 7 and September 11 and that was how the American people acted in the days, months and years following the attacks.  After Pearl Harbor, every American, not just those in the military, played a direct role in the war effort.  There was rationing of tires, gasoline, sugar, coffee and countless other items.  Americans embraced recycling, salvaging rubber, tin and even kitchen fat, an important ingredient in explosives.  Every worker was urged to put 10% of every paycheck into War Bonds and most did.  Even here in Lowell, Massachusetts, thousands of miles from the nearest enemy aircraft, each night at dusk every homeowner and tenant pulled shut the blackout curtains lest they be chastised by the neighborhood air raid warden.  In short, there were countless reminders to everyone that there was a war on and there were dozens of ways that ordinary people became involved in the war effort.

Compare all of that to what happened after 9/11.  Certainly there were noble efforts by many of the people in this room to hold patriotic rallies, to send Care packages to our troops, and to advocate for better benefits and medical treatment for returning troops.  But what of the majority of the population?  We were told that the most important thing that ordinary Americans could do in response to the attacks was to go to the mall and shop.  To be fair, that’s not as crazy as it sounds.  Even back in 2001, consumer spending was critical to our economy and since our economy was the real target of the terrorists, urging folks to continue to buy things may have seemed like a reasonable response.

Americans should always come together on December 7 to remember the bravery and the sacrifices of those who were at Pearl Harbor on that day.  But we should also use it as an occasion to remember how the American people rose up and responded to a tremendous challenge.  If we keep that memory alive, then maybe future generations of America will better understand how to react to a similar crisis in their own time.