The original grant for the town of Lowell only included about 20 percent of the land that makes up the city today. Over the rest of the nineteenth century, the Massachusetts State Legislature annexed portions of Tewksbury, Dracut, and Chelmsford to Lowell to give the city its current configuration. Here are the various annexations presented with reference to landmarks familiar to current residents.

An Act to Incorporate the Town of Lowell

The original grant for the town of Lowell consisted of 2,874 acres from the town of Chelmsford including the places we know today as Downtown Lowell, the Acre, South Lowell, and the Lower Highlands 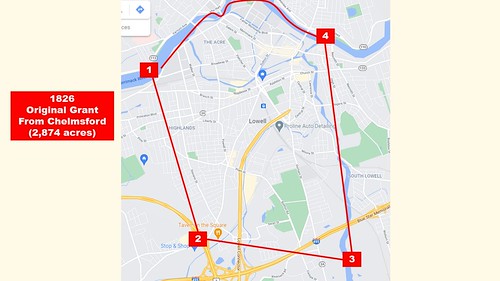 (Summary) The northeasterly part of Chelmsford lying easterly of a line drawn as follows: beginning at Merrimack River at a stone post about 200 rods above the mouth of Pawtucket Canal;

thence running southerly in a straight course until it strikes the Middlesex Canal at a point ten rods above the canal bridge near the dwelling-house of Henry Coburn;

Thence due east to a stone post at Concord River

Is incorporated into a town by the name of Lowell.

[effective March 1, 1826 – that’s the day they start collecting taxes for the town; before that is still owed to Chelmsford].

The land annexed to Lowell was 384 acres from Tewksbury, then known as Belvidere Village, now known as Lower Belvidere. 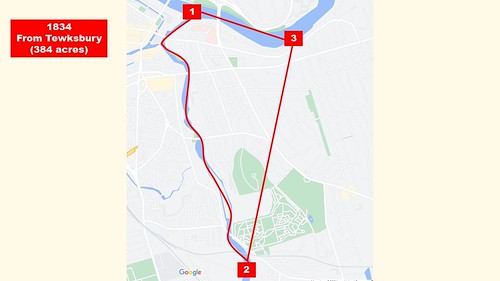 [summary] All that part of the town of Tewksbury lying within the following lines and bounds, namely:

Beginning at the mouth of the Concord River at its confluence with the Merrimack River;

Thence running easterly on said Merrimack River, 229 rods to a large rock in said river about 2 rods from the shore embracing all that part of the Merrimack River against said line which is in Tewksbury;

Thence running south 17 degrees and one quarter west, 404 rods to said Concord River by the mouth of a small brook emptying into the same;

Including all of said Concord and Merrimack Rivers which belonged to Tewksbury.

Is hereby set off from and separated from Tewksbury and annexed to and made a part of the town of Lowell. [March 29, 1834]

An Act to Establish the City of Lowell

Because of the rapid growth of its population and industry, the state legislature granted Lowell a city charter in 1836. It was the fourth city in the Commonwealth.

The two branches of the City Council on the second Monday of October each year shall meet in convention and determine the number of representatives which it may be expedient for the city to elect to the General Court each year.

On 1st of March each year, inhabitants of the six wards shall gather and give their votes for one person to be Mayor, six persons for the board of aldermen; and four persons from their ward to be members of Common Council and one person from ward to be member of school committee.

In 1851, the state legislature annexed 680 acres from the town of Dracut to the city of Lowell. This section was called Central Village and is today known as Centralville. 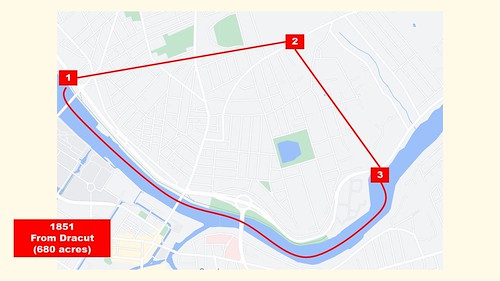 So much of the town of Dracut as is commonly called Centralville bounded and described as follows:

Beginning at the thread of Merrimack River near the foot of Hunt’s Falls opposite the southeast corner of the land of the Proprietors of Locks and Canals;

Thence running north 19 degrees and 30 minutes west about 300 feet to the margin of said river at said southeast corner bound;

Thence in the same course northerly 3827 feet to the northerly side of the new county road leading from Lowell to Methuen;

Thence north 89 degrees west, 5270 feet to the margin of said river near the end of a wall opposite the head or north end of Long Island;

Thence in the same course about 100 feet to the end of Long Island;

Thence westerly in a direct line to the thread of said river;

Thence down said river by the thread thereof to the point of beginning.

All of the above is set off and separated from said town of Dracut and annexed to the city of Lowell.

This act shall take effect from its passage – approved by Governor, February 28, 1851.

This annexation from the town of Chelmsford was 1,174 acres and consisted of the Upper Highlands and Middlesex Village. 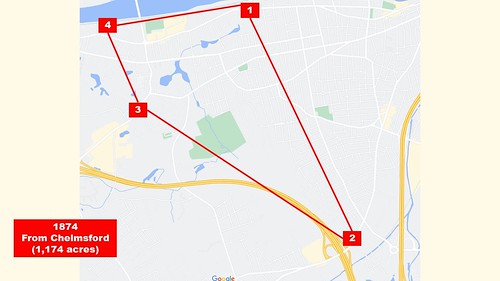 Section 1 – That part of the town of Chelmsford with all the inhabitants and estates thereon, lying easterly of the following described line, to wit: Beginning at a stone post, marked “C. and L.,” on the boundary line between said town and said city, and about ten rods north of Chelmsford Street, thence running north-westerly in a straight line 9,270 feet to a stone bound, at the junction of the Chelmsford and Westford roads; thence northerly in a straight line, crossing said roads, 4,125 feet, to a stone bound on the southerly bank of Merrimack River at a point 1,000 feet westerly of the “twenty-eight mile” post on the track of the Nashua and Lowell Railroad Corporation, and thence northerly to the thread of said river,

Is hereby set off from the town of Chelmsford and annexed to the city of Lowell, and shall constitute a part of the fourth ward thereof, until a new division of wards is made.

[several other sections about taxation and representation]

Section 6 – This act shall not take effect until accepted by the city council of Lowell.

This annexation consisted of 2,168 acres and included the rest of Centralville and all of Pawtucketville. 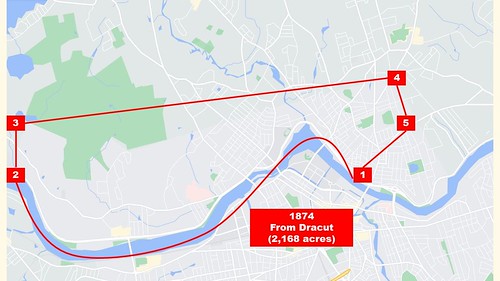 Section 1 – So much of the town of Dracut in the county of Middlesex lying upon the Merrimack River, thus bounded and described, to wit: Beginning on the northerly side of the new country road leading from Lowell to Methuen,  at the northeast corner of that part of Lowell called Centralville, thence running north nineteen degrees and thirty minutes west, to a stone bound on the northerly side of the road in said Dracut, leading from George T. Whitney’s house to and by the poor farm in said Dracut, (said line and course being a continuation of the course described as 3,827 feet, northerly from the margin of the river, in the act entitled An Act to Annex a part of Dracut to Lowell passed February 28, 1851, chapter 8, section 1); thence running westerly in a straight line to a point on the margin of Merrimack River at the intersection of the town of Dracut and the town of Tyngsborough; thence southwesterly upon the boundary line now between said Dracut and said  Tyngsborough to the thread of Merrimack River; thence down said Merrimack River by the thread thereof to a point in the thread of said river easerly in a direct line from the end of Long Island at the intersection of said city of Lowell and said Dracut; thence by the division line between said city of Lowell and said Dracut as descrbied in the act of February,  1851, to the point of beginning . . .

Section 11 – This act shall take effect on the first day of August 1874; provided it shall first be accepted by the city council of Lowell.

An Act to annex a part of Tewksbury to the city of Lowell.

Section 1 – That part of the town of Tewksbury contained within the lines described as follows: beginning at a stone bounded in Merrimack River about 677 feet easterly of the northeasterly bound between the city of Lowell and the town of Tewksbury as established y chapter 159 of the acts of 1834; thence running south, six degrees fifteen minutes east, crossing the old Andover road, to a point in Andover Street; thence in the same course, crossing said Andover Street,  to the corner of a new street, and by the westerly line of said new street about 463 feet to a point in a cross fence at a hum; thence south four degrees west, 3,664 feet, to a hub at the intersection of the southerly line of the highway called High Street, and otherwise known as Main Street, with the westerly line of the highway or town way known as the Billerica Road; thence southwesterly about 1,749  feet to a stone bound at the most southeasterly corner of the land of the proprietors of the Lowell  Cemetery, enclosed, and known as “Lowell Cemetery”; thence southwesterly to the point in the Concord River at which the northerly line of the location of the Lowell and Lawrence railroad intersects the present boundary line between said town and city,  and thus northerly by said boundary line to the point of beginning, . . .

Section 6 – This act shall take effect upon its passage.

An Act to annex a portion of Tewksbury to Lowell

Two annexations from Tewksbury added 210 acres in 1874 and 220 acres in 1888, all part of Belvidere. The image below shows the combined area: 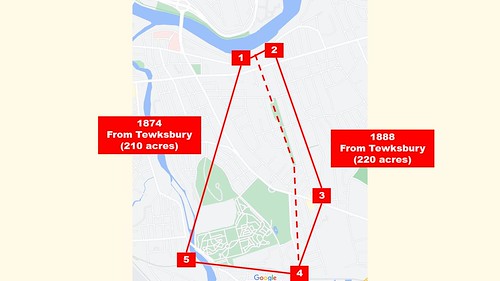 Section 5 – this act shall take effect upon its passage.

An act to provide for the annexation of a part of Tewksbury to the city of Lowell.

This final annexation consisted of 1,087 acres and included outer Belvidere and Wigginville. 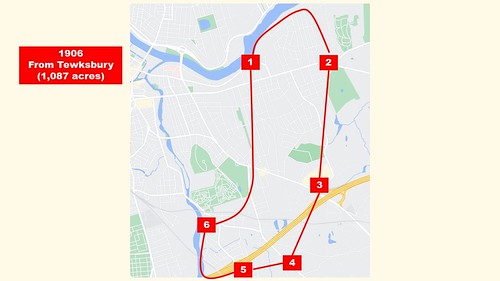 Section 1 – So much of the town of Tewksbury . . . as is substantially bounded as follows: Beginning at a point on the southerly side of the Merrimack river at a stone wall, at the dividing line between land of A J Trull and R G Bartlett; thence southerly and southwesterly by the dividing line between said Trull and Bartlett by a stone wall 3,366.98 feet to a point in the southerly line of said street, at the dividing line of John Fleming and C I Hood; thence south six degrees, nineteen minutes west by said dividing line and through land of C I Hood 678.7 feet; thence south 21 degrees, fifty minutes, 41 seconds west by land of Haley through land of Clark, Hood and Gookin and Eliades across Clark street 5,708.33 feet to the southerly line of Main Street; thence south 28 degrees, 10 minutes, 59 seconds wet through land of French and Felker across Whipple and Billerica roads and Felker street 2,526.97 feet to the northwest line of Elm avenue; thence south 86 degrees, 51 minutes, 45 seconds west by the northwesterly line of Elm avenue across Lowell and Talbot streets and the southern division of the Boston and Lowell railroad and through land of Shedd and the United States Cartridge Company 3,600.16 feet to the Concord river; thence northeasterly down the Concord river 4,390 feet to a point opposite a stone monument on the southwestly side of Billerica street; thence southeasterly by the said monument across Billerica and Lawrence streets and the Lowell and Andover railroad to a stone monument on the easterly side of Boylston street; thence in a northeasterly direction 2,388.72 feet to a stone monument in the northeasterly line of Main street and the easterly line of the Butman road; thence northerly by the easterly line of the Butman road 5,114.13 feet to a stone monument in the northerly line of Andover street; thence westerly by the northerly line of Andover street 35 feet; thence northerly by the dividing line between the land of the Butler estate and land formerly of the Plummer estate across East Merrimack street, 897 feet to the Merrimack river; thence easterly down the Merrimack river about 5,200 feet to the point of beginning  . . .

Section 7 – this act shall take effect upon its passage.

3 Responses to Annexations to Lowell in the 19th century