On January 7, 2014, we posted a story by Mehmed Ali and Beth Brassel about Moody Gardens, a Lowell bar of the 1950s and 60s located at 294 Moody Street. The story (which can be read in full here) tells how the bar struggled until one night in 1957 when the bar’s manager invited an all-women Country & Western band that was playing at another bar to perform at Moody Gardens. According to Ali and Brassel, “Along with the band came lesbians from not only Lowell, but also from Lawrence, Wilmington, Chelmsford, Dracut, and even Worcester. The women began staking out a place for themselves in Lowell and, ultimately, a presence in the larger society.” For the rest of the time it remained open, the Moody Gardens formed a welcoming community for lesbians across the region notwithstanding harassment by the police and licensing authorities.

Fast forward to earlier this month. I received an email from a woman from Florida who had found the Ali-Brassell article on this website while searching for information about the Moody Gardens for her mother – who was a member of that all-female Country & Western Band. I invited my correspondent to write something about her mom and her experience playing music in Lowell. Here is what she sent: 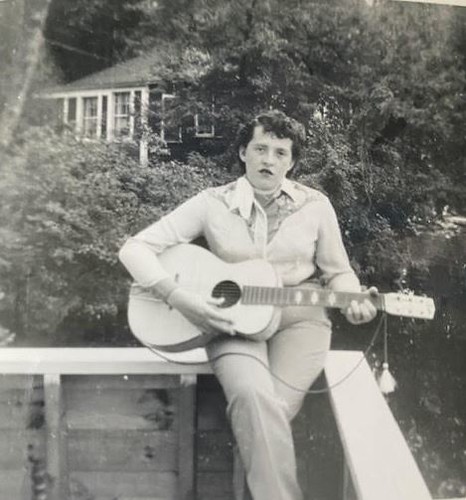 Lorraine Bergeron of the 4 Starettes

Moody Gardens: The View from the Stage

My mother is in a nursing home. Her name is Lorraine Bergeron and she’s 88. Some days she’s a bit foggy, but there are moments of clarity when she remembers special times of her life. These memories are often punctuated by music – country music. When she tries to yodel with her aging voice, the light comes back in her eyes and she becomes more animated.

I was trying to find photos of places that had special significance for her when she was in her 20s back in the 50s in Lowell. One such place was the Moody Gardens, another the Silver Star. These bars held such joy for her as she truly came alive when she was on stage and singing country & western. And could she yodel!

I found the article on Lowell history about the Moody Street Gardens. When I found the article, I was thrilled.  Mom talked about the Moody Garden days often and had wonderful times there. She was part of an all-girl country & western band at the Silver Star, known as the 4 Starettes. Mom played the bass after a neighbor taught her some basic chords to play, and the owner of the Silver Star bought her a white bass of her own – she paid him back, $2 a week. It was like a floodgate opened when I read her this story – yes, the all-girl band that she was part of was hired by Gene Berube to perform at the Moody Gardens, and that’s where she went.

From her perspective, she didn’t really see how having the band there, playing for gays and all who came to hear them was so important. I explained how it provided a place to go to spend an evening singing and dancing, making friends, and just being. My mother loved the warmth and reception of the crowd when she would sing and yodel such popular tunes as “I Want to be a Cowboy’s Sweetheart”, and “He taught me to yodel”. Not one to accept that she had any real talent, it felt wonderful to her that they shouted requests to yodel, and the crowd reaction would warm her. She was accepted. They were accepted. It was cathartic.

The Starettes featured Jean Burbine on guitar who had a wonderful singing voice, Emma Gallant on the violin, who would take out her tiny violin from when she played as a child wowing the crowd. The accordion was played by bandmate Lorraine (Mom can’t recall her last name).

My Mom’s legacy is two musical sons and a daughter that appreciates their talents.

4 Responses to Moody Gardens: The View from the Stage