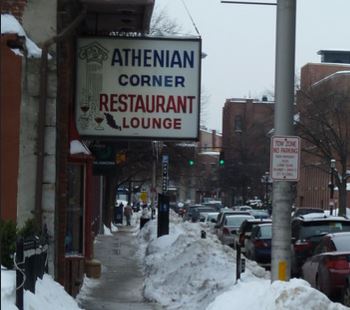 The House That Stavros Built 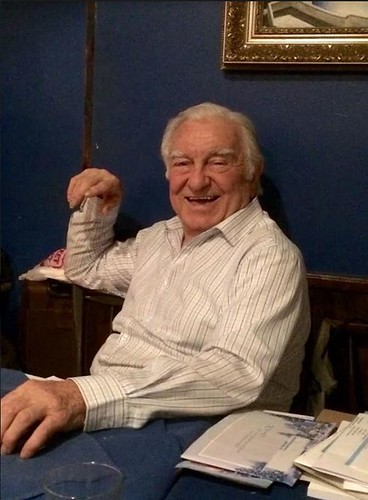 Stavros Panagiotopoulos is at his customary table at the rear of the Athenian Corner on Market Street. At the age of 87, he still drives to his restaurant every morning, unlocking the door at 6:00 AM. He puts on the coffee, and then begins to check the inventory and prepare a list of things that need to be ordered to keep the bar and the menu stocked. It’s a long way from Kefelovriso, his native village in the southwest region of the Peloponnese peninsula, where he was born in 1933. The population of his village in those days was 700 to 800. It’s about 100 today.

It was not an ideal place to grow up at that time. First, there was the Nazi occupation. When the Germans retreated in 1944, the civil war began, with the British and Americans supporting the government side, and Yugoslavia and the Soviet Union supporting the communists. Stavros shakes his head sadly at the memory. “There was a lot of fighting until the war ended in 1949.”

In the early 50’s, he dreamed of joining his brothers in a city called Lowell, Massachusetts, but first he had to perform his compulsory two-year military service. He served for three. During that time, he met Alexandra Lambrakopoulos. She was from another village but came to teach in Kefelovriso. They were married a year later. They told themselves they might go to America for five years and return to Greece, but Stavros tells me, “Once you get used to life here, after five, six, seven years, you’re not going back, unless it’s to visit.” In the meantime, they had a daughter, Thea. 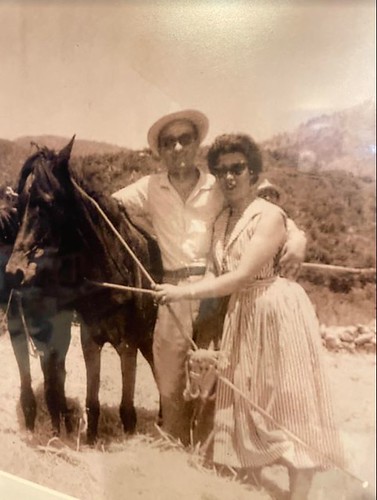 There were lot of people applying for visas to the USA, and the young couple would have had to wait their turn for several more years, but fate intervened three years later. The Greek government offered to sponsor them if Alexandra would work for them as a sort of teacher/cultural emissary. The Hellenic American Academy in Lowell, Mass. needed a Greek language teacher to serve their thriving Greek community. Soon, the three of them were aboard a big silver plane headed to Boston. It was 1961. Neither Stavros nor Alexandra knew English. They had great difficulty even asking for water and had to perform a sign language routine to get milk for Thea.

They realized that life in America would not be easy as they tried to work and learn English. But difficulty and hard work never deterred Greeks, certainly not the Greeks who came to this city. Stavros had another dream, one that he kept in the back of his mind as he worked at the Laganas Shoe Shop in Lowell and then at Cardinal Shoe in Lawrence, but he would need money to realize it. When he was told he would be put in charge of the packing room at Cardinal Shoe, he asked his supervisor if his poor English would be a problem. The man responded, “I’m not promoting you for your English. I’m promoting you for your work.”

In the meantime, he and Alexandra had another child, a son, Theodore, who is today the “morning voice of the Merrimack Valley,” Teddy Panos on WCAP. “He shortened the family name when he began to work at Channel 7,” Stavros tells me. Teddy is still legally Panagiotopoulos, but for broadcast purposes, he is Panos. He does his daily four-hour morning radio talk show and can usually be seen in the evening working at the Athenian Corner as line cook, bartender, or any other role that needs to be filled. His sister Thea also grew up in the business, and still waitresses at the restaurant.

Stavros worked in the shoe shops for seven years, until, as he says, “the shoes went down,” and then took a job as a house painter. All the while he was saving money. “A lot of people, they spend everything they make. Every time I made ten dollars, I put two on the side.” He had an idea about the kind of business he wanted to open. It would be a sort of restaurant/night club where families could come and eat and hear live Greek music. “I always loved musicians and hearing their music.”

He and his brothers, Jimmy, Bill, and Nick tried to buy the Parkway, but that deal fell through. In 1974, they learned that a building on the corner of Market and Shattuck Streets was going up for auction and bought it together, though Stavros became the sole owner in 1981. The previous owner had been local businessman and congressional candidate Roger Durkin, who tried to make a go of it at the site with the Limerick Pub. Before the auction, Roger told Stavros, “I won’t take a penny less than 100,000.” He smiles as he recalls, “We bought if for 65,000.” Laughing at the thought, he continues, “Later, Roger used to come in and say, ‘You godamn Greek! I couldn’t keep it open!’ Roger was a good guy. He came in a lot. He was a very educated man. He used to ask me about Greek words. He knew history. He knew everything.”

I ask him if he was already a cook when he bought the restaurant. “I liked to cook. But I met an Irish chef from Peabody. He was a professor. He knew how to cook Greek, and he had a book. He told me, ‘That’s not the real lentil soup! You need to do it this way!’ He stayed with me for six months, and I knew I had to learn myself because cooks can come and go. I studied all the recipes, and my wife’s recipes, too, and I taught Teddy Grover, who started here when he was in high school in 1986. The first time, he filled in for a dishwasher who called in sick. He learned to cook, and he’s still cooking with us, thirty-five years later.”

I tell Stavros that I’ve tried to make lentil soup at home, but it never tastes as good as it does at the Athenian. “You know George Behrakis, the rich guy? A friend of his had lunch with him in Boston, and his friend said, ‘Hey George, I don’t like this lentil soup.’ George said to him, ‘If you want lentil soup, you have to go to Lowell to the Athenian Corner.’ And the guy came in here and said, ‘You know who sent me here? George Behrakis. He said I had to come to Lowell for the best lentil soup.”

It was tough at first. Growing his own business demanded even more hours than he had spent at the shoe shops. He says he was lucky to have a wife like Alexandra. The long hours can take a toll on some marriages. “Someone, one time,” he says, “asked Zenny Speronis—you remember he owned the big restaurant—the Speare House, they asked why he never got married. Zenny said, ‘If you own a restaurant and you get married, either you are going to lose your restaurant or you are going to lose your wife.’ But Alexandra understood the business. She helped a lot. She was a good cook, too. We had hard times, but we kept going because we had saved some money. My children grew up helping us in the restaurant, and my nephew, Yianni, too. He began as a busboy, and parking cars, then as a waiter and bartender.

Covid was hard. We didn’t know if we would survive. The take-out saved us. People supported us. They want us to keep going. Now we are getting the music back on Saturday nights, and we hope things get better. Finding help is hard, but we keep going. People come in and say, ‘Thank you Steve, for staying open. We like coming here.’ I say, ‘Thank you for supporting us.’” 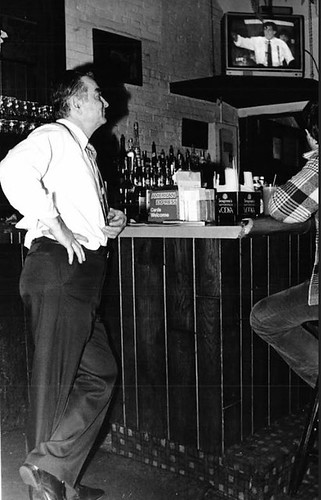 Stavros at the Athenian Bar

The Athenian Corner, like the Olympia, another fine Greek restaurant on Market Street, is one of the older businesses in Lowell. “Do you realize,” Stavros asks me, “that you have been coming in here for almost fifty years?” That’s a bit scary, but yes, I admit he’s right. I first came in at some point in the seventies, maybe the year the Athenian opened. The drinking age was 18, and what luck—so was I. It was the music that first drew me in. These were talented musicians, playing the oud, the klarino, the bouzouki, the hand-drum. Fred Elias, who played violin on the Athenian stage for over twenty years, was truly gifted. I loved to listen to his playing. “He was a professional,” Stavros says. “He could have played anywhere. They offered him jobs in New York and Las Vegas, but he liked playing here. It was less money, but he liked playing here.”

I tell Stavros that another thing that kept me coming back to the Athenian, aside from the food and the music, was that I never saw a fight there, never an obnoxious drunk. “That’s right,” he tells me, “I wanted a family place. A quiet place. A woman told me, ‘I would like to come to the Athenian Corner, but I don’t want to come alone.’ I tell her, ‘Even if you come by yourself, no one will bother you.’”

I believe I can vouch for that. Greeks in general, and all the people I’ve ever met at the Athenian, are civilized. After all, the Greeks invented Western civilization.

The loss of Alexandra, his wife of 62 years, in February of this year was a blow to Stavros and to the family, but the business goes on, and renovation plans are in the works.

I wrap up my conversation with Stavros, and as I head out, I point to the window seat and say, “That’s where my wife Olga and I sat on our first date. Yianni was our waiter.”

“Not only you. Ken Lavallee, Arthur Demoulas, An Wang. They all came in with their wives before they were married.”

Before I leave, I ask Stavros what advice he’d give to immigrants or newcomers to the city. “First, you have to be a good worker. If you’re a good worker, you’re going to go ahead. People will support you. Some people think if you don’t speak good English, you’re stupid. You have to show them that you have ideas. That you learn the job. That you solve the problems.” Sound advice for all of us.

This is the story of Stavros Panagiatopolous, a man who came with his wife to our city with no capital and no English. He taught himself the language while working in shoe factories and painting houses. No, he didn’t start Microsoft or Facebook, but he built one of the small businesses that are the backbone of our city, and our country. He contributed to the richness of the community, and provided work for waitstaff, cooks, musicians, and dancers. He brought a corner of his ancient homeland to our downtown and worked tirelessly to keep it open. He passed on to his family the unshakable belief that he states so simply. “If you’re a good worker, you’re going to go ahead.” His life is a testament to the possibilities and the dignity that arise from working hard and surmounting obstacles. 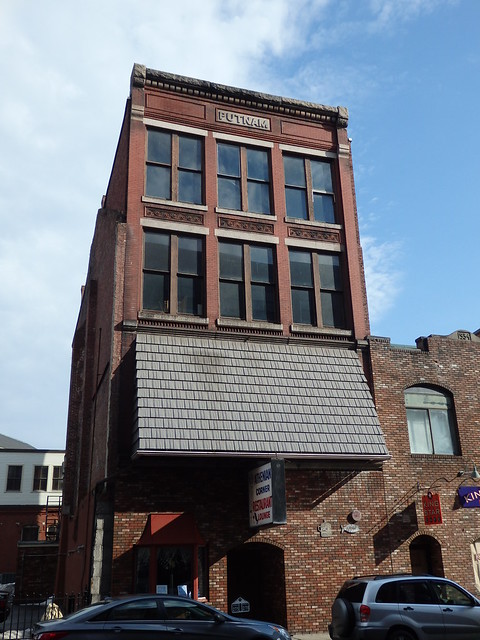 14 Responses to The House That Stavros Built