William C. Crawford is a social worker, writer, and photographer who lives in Winston Salem, North Carolina. He was a photojournalist in Vietnam and has since written a number of books of photography and on other topics. The following story about Crawford’s friend and mentor Ollie Noonan Jr. (an AP photographer from Boston) is from Crawford’s Vietnam War memoir, Just Like Sunday on the Farm which is available online along with Crawford’s other books. 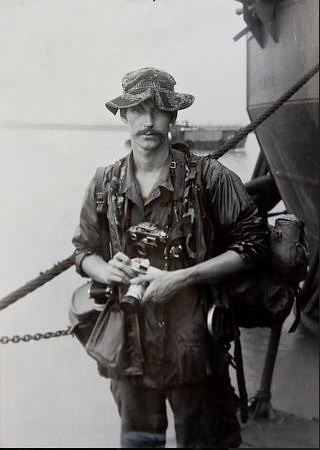 My Last Day with Ollie Noonan:
A Combat Photographer’s Remembrance

I finally reconnected with Ollie Noonan, Jr. after 45 years. He is on Campobello Island now, near his family’s home, not at Fenway Park where we planned to meet. His gravesite is hard by the Bay of Fundy where some of the world’s biggest tides provide a striking contrast to the rugged jungle terrain of Hill 445, Landing Zone West, where we met.

I last saw Ollie in 1969 when we spent a long day together interviewing and photographing exhausted grunts as they battled an overpowering North Vietnamese division. The temperature was an unholy 120 degrees, and the strong stench of death poisoned the air in the Hiep Duc Valley, Republic of Vietnam.

Ollie and I bonded instantly because of rock ‘n roll and sports. We planned our day’s itinerary as the Coaster’s “Yackety Yak” pounded out of my tiny transistor radio. I sang along like crazy to calm my combat nerves. Ollie sang harmony pausing just long enough to remove his smoldering cigarette from his moustache framed lips. He cut a striking figure at 29: tall and handsome in his jungle fatigues.

We talked furiously about the Celtics and the Red Sox. Ollie took mesmerizing photos of Bill Russell dueling Wilt Chamberlain in the Boston Garden. I wouldn’t see them until decades later on the internet. We made a solid plan to meet back in the world after the war to go to Fenway Park. He knew of a good neighborhood bar that served steamed clams-my favorite.

Ollie even took up the thankless job of trying to make me a better photographer. I lied during my job interview when my Sergeant Major asked me if I could shoot photos. I had plenty of writing experience from my college newspaper days, but I didn’t know jack shit about cameras. My assignment abruptly changed from rifleman to photo journalist in the same battalion.

I learned on the job and Ollie pushed me along the learning curve. I realized later he was just paying forward a family debt he owed his father who taught him photography at an early age.

Ollie’s dad, Ollie, Sr., was a respected Boston newspaper photographer. He took iconic photos such as the doomed Andria Doria foundering in “Times Square” off Nantucket in 1956. Ollie and his dad eventually worked briefly for rival newspapers.

Ollie, Jr. quickly made a name for himself by shooting well known photos of the Kennedys, Boston sports figures, the Beatles, and Martin Luther King, Jr. He was president of his press photographers association and he paid his own way to the Nam.

Noonan came to the war zone to experience every photo journalist’s dream: combat. Later his dad would say he went “in search of the truth.” The young photographer wrote his family: “If you hear that I am coming back soon, forget it. I like this place. It is really great for a newspaper man.”

Noonan signed on with the Associated Press although he vehemently told me he was “just on leave” from the Boston Globe. He was one of the Horst Faas boys, the platoon of young photographers hired by the legendary AP photo chief. These lensmen would gain immortality for their stark images of the war. Faas also came to LZ West with Peter Arnett where he too helped improve my photography.

Ollie arrived in Hiep Duc, Que Son, and Song Chang Valleys in the summer of 1969 as the region became a focal point for big headlines. The Communists mounted a huge offensive against Hiep Duc, a model village for the South Vietnamese government’s refugee resettlement program.

The powerful 2nd North Vietnamese Army Division infiltrated the area over time on a mission to annihilate Hiep Duc. When they were prematurely discovered by US troops, they revamped their battle plan to just kill as many GI’s as possible to take advantage of mounting anti-war sentiment in the US.

As temperatures soared, a major August battle erupted. Infantry soldiers dropped like flies from heat exhaustion and withering enemy fire. A number of compelling subplots unfolded against the backdrop of this bloody inferno.

Notre Dame running back Rocky Bleier, an army draftee, was seriously wounded as his company engaged in close combat with the NVA. He would later rehab from his career-threatening wounds to win four Super Bowl rings with the Pittsburgh Steelers. A movie, Fighting Back, depicts Bleier’s story, and a book, Death Valley by Keith Nolan, chronicles the heroism and the failures of GI’s during the summer battle.

Other US units balked throughout the region but with far less fanfare. Marines defied orders to don flak jackets in the boiling rice paddies. The entire demeanor of the American fighting machine was changing in 1969 as dope, facial hair, beads, peace insignia, and protest music began to chip away at military discipline.

On August 19, Ollie Noonan headed back for another visit to our region accompanied by AP colleague, Richard Pyle.  A critical decision occurred when Noonan elected to chopper to LZ Center while Pyle continued on to LZ West. Both locations were in the thick of the battle, but the AP men attached themselves to different battalions several klicks apart. Noonan may have chosen LZ Center because he had already been with us on West several times.

Noonan ended up embedded with the aforementioned Alpha Company near the Song Chang River. He experienced a day of fierce fighting against an NVA regiment, with temps reaching 120 degrees. Later in the afternoon he made another fateful decision. He requested a helicopter extraction. He wanted to get his fresh combat film back to Da Nang to be processed quickly.

He scrambled aboard the helicopter of Battalion Commander, LTC Eli Howard. The chopper was taking heavy small arms fire, but the pilot managed to fly safely to the east by hugging the Nui Lon ridge line. Howard made several attempts to land with nearby Bravo Company, but intense fire forced him to abort.

The chopper banked steeply toward Hill 101, probably to recon an enemy anti-aircraft position. Enemy  fire struck the chopper dead on, throwing Howard and Sgt. Major Franklin Rowell out the open doors. The fuel tanks exploded creating a midair fireball. Some of the craft stayed intact as fuselage fragments rained down on the ridgeline.

I was scurrying around LZ West trying to coordinate the expanding press coverage of the battle. I scooted into the Battalion Ops Center to arrange a chopper ride to the bush when amid the chaotic buzz of radio chatter I heard a heart-stopping transmission. A nearby battalion commander had been shot down. One of the passengers was an AP reporter. Ollie! Richard Pyle mentioned his location to me earlier. My heart sank way below my jungle boots.

A pall settled on me. I staggered outside into stifling heat and the deafening sound of our artillery pounding away at enemy positions. The din muffled a single sob from deep within my chest. I selfishly thanked God that I wasn’t on that chopper. That’s what I always did when we had KIA’s–my only way of coping.

The helicopter crash site quickly became famous in every newspaper in the world. A dazed and exhausted Alpha Company temporarily refused to move out to recover the bodies. After five more days of fighting, US forces finally reached the remains of the bird. Horst Faas arrived to accompany the advancing GI’s. There was little left of Ollie Noonan, but Faas did retrieve one of Ollie’s cameras. Eight persons perished, including the crew.

Several grunts related stories of Noonan feverishly shooting photos, even leaning past a firing helicopter door gunner to capture images of the bedlam. Noonan even laid down his camera to help drag a wounded GI to safety.

Several years later during a hurried trip home through Boston, my wife and I visited Fenway Park for a Red Sox game. I tried to remember the name of the bar where Ollie and I planned to meet. I couldn’t dredge it up. All I could see in my mind’s eye was his moustached face with that smoldering cigarette dangling.  “Yackety Yak” pounded in my brain.  I remained silent, flashing back, still not close in 1976 to coming to terms with the jungle war or with Ollie’s fate.

We waited our turn at the teeming ticket window. The clerk finally barked out in a clipped Boston accent: “How many?” I silently thrust my left hand forward with my wallet in my right. I curled back my index finger with my left thumb, exposing my remaining three fingers. He shoved three tickets out the window. I stuffed them in my pocket with the change.

I said not a word to my unsuspecting wife. I never discussed the Nam with anyone but ex-grunts back then. Ollie’s empty seat in our crowded Fenway Park section was his memorial. I lamented that he would never again help me with my photography. There would be no steamers and beer with him that night or ever. There at Fenway for a few heart-breaking hours I finally caught back up with my friend. It just took me 45 years to be able to write the story.

To calm down after engagement, Ollie Noonan often wrote poetry and listened to tapes of classical music. He wrote the following poem in Vietnam and sent it to the Globe obituary department for use if he were killed. It is at his grave site.

On the Side That’s Winning

And I, sensing mortality

But afraid of tomorrow, rush to greet it

Afraid to realize it may be hopeless

To carry tears on my sleeves

While right behind me, in cloak and gown,

Though the bells toll

They can bomb the land

But not the soul.

“Nothing comes easy here. Everything is earned.” – Ollie Noonan, in a letter home, 1969.

2 Responses to My Last Day with Ollie Noonan