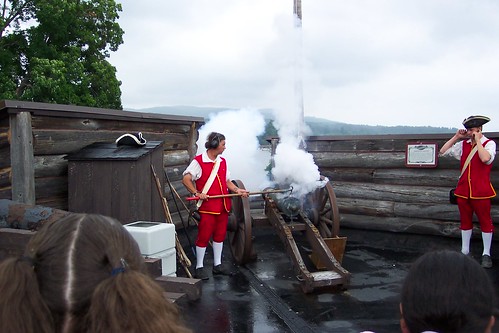 Last week a friend emailed that he was taking a quick vacation trip to the shore of Lake Champlain. While the lake is a delightful destination relatively close to Lowell, I know it best as one of the most important places in American history, especially American military history. Noted British historian Sir John Keegan in his book “Fields of Battle: The Wars for North America” (1905) identified Lake Champlain as one of the most fought-over places in North America. (One of the others was Yorktown, Virginia).

I’ve long been interested in military history and from an early age realized that actually visiting a battlefield even centuries after battle occurred improves the ability to understand  what had happened there. Consequently, I have visited many battlefields on or near Lake Champlain given its relative proximity to Lowell. Here are some of the highlights of my travels:

Lake Champlain is named for French explorer Samuel de Champlain who reached the lake in 1609. The lake is 490 square miles making it the 13th largest lake in the United States. It is 107 miles long, 14 miles wide, and it separates Vermont and New York and also extends into Canada. The lake collects water from the Green Mountains of Vermont and the Adirondacks of New York. It is home to all types of aquatic activities and adventures and partially freezes in the winter.

Rogers Rangers was a unit of light infantry under the command of Major Robert Rogers which fought on the British side on Lake Champlain during the French and Indian War. Originally just one company of about 100 men, mostly from New Hampshire, the Rangers were so successful that eventually multiple companies were formed, all under the command of Rogers. The Rangers operated year round on and alongside Lake Champlain using whaleboats in the summer and snow shoes in the winter and venturing on raids against French and Indian towns far from their base. Rogers developed “28 Rules of Ranging” which are still used today in an updated form by the U.S. Army’s elite 75th Ranger Regiment. Because Rogers chose to fight (every effectively) for the British in the American Revolution, he is not as much of an American hero as his exploits in the French and Indian War would warrant. 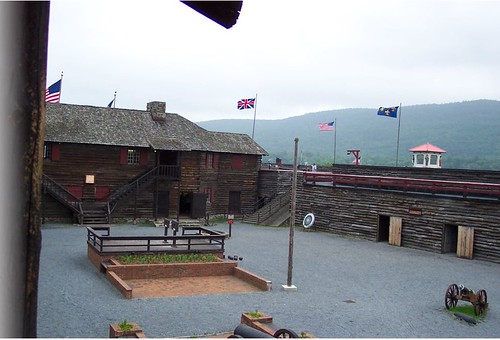 The Last of the Mohicans is set in the North American wilderness during the French and Indian War. A historic novel written by James Fenimore Cooper in 1826 and enhanced by the excellent 1995 film starring Daniel Day-Lewis, much of the book is set at Fort William Henry which is just 3 miles southwest of Lake Champlain. Some background: In the French and Indian War, the French pushed down Lake Champlain and built a massive stone fortress near the lake’s southern tip. Called Fort Carillon by the French, this fort posed a strategic threat to British North America. In response, British forces from Fort Edward which was on the Hudson River about 20 miles southwest of Champlain, moved northeast and built a new fort just three miles from Ticonderoga to block the French path to the Hudson. This new fort, constructed on the shore of Lake George, was named Fort William Henry. In August 1757, the French besieged William Henry and the British surrendered. Because they did not have the resources to hold or feed prisoners, the victorious French released the British on parole (meaning they would not fight in the future). While marching through the wilderness from Fort William Henry to Fort Edward, the British column was ambushed by Native American allies of the French and many were killed. The French burned the vacated Fort William Henry and withdrew to Fort Carillon. Two years later, the British captured Fort Carillon and renamed it Ticonderoga. 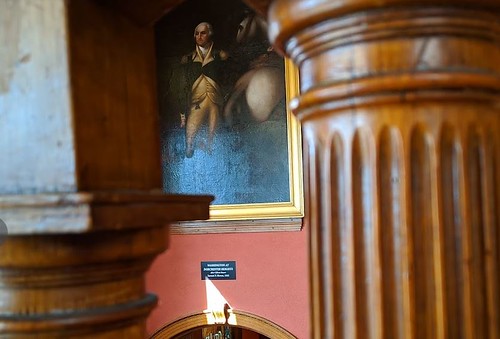 The Knox Trail is the route used by Henry Knox to drag dozens of cannon through the snow from Fort Ticonderoga to the outskirts of Boston during the winter of 1775-76. There, American commander George Washington had the cannon surreptitiously emplaced atop Dorchester Heights which forced the British to evacuate Boston in March 1776. Although the British had fought hard to capture Ticonderoga in 1759, the fort’s value was greatly diminished by the end of the French and Indian War which expelled the French from Canada and made it a British possession. In fact, when the American Revolution began in April 1775 there was only a single British sergeant at Ticonderoga as a caretaker. The following month, American forces led by Benedict Arnold and Ethan Allen evicted the caretaker and captured the fort and its cannon. 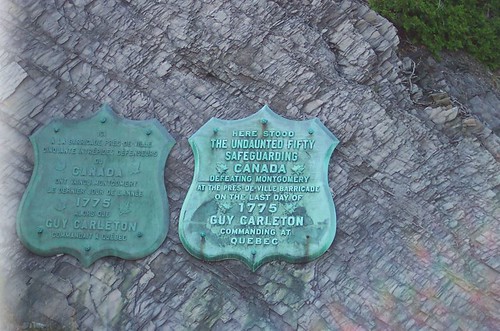 Plaque at location of General Montgomery’s death in Quebec

The Invasion of Quebec was launched from Lake Champlain in August 1775. An American force under the command of General Philip Schuyler (the father of the Schuyler sisters of “Hamilton” fame) moved “up” the lake (to the north) to engage the British who were threatening an invasion from Montreal. Schuyler became ill and his second-in-command, General Richard Montgomery, took over. Back at his headquarters in Cambridge, Massachusetts, American Army commander in chief George Washington sought to capture Canada before reinforcements could arrive from England. He ordered Montgomery to attack first Montreal and then Quebec and delegated Benedict Arnold, then back in Boston, to lead a second wing of the invasion force through the wilderness of Maine and simultaneously attack Quebec from the east. Montgomery, after first capturing Montreal, reached Quebec in late December 1775 and Arnold arrived a few days later. They launched their joint assault in a blizzard on New Year’s Eve (December 31, 1775). Montgomery was killed by hostile fire early in the action and Arnold was shot in his left leg. The American invaders were repulsed. They remained outside of Quebec for several months but withdrew south just before British reinforcements sailed up the Saint Lawrence River in the spring of 1776.

The Battle of Valcour Island took place on Lake Champlain on October 11, 1776. The British reinforcements that arrived in Canada that spring were intended to attack down Lake Champlain to split the American colonies in two and thereby put an end to the rebellion. But without control of Lake Champlain, the British Army could not advance. While the British constructed their own warships at the northern end of the lake the Americans, under the command of – you guessed it – Benedict Arnold, did the same at the southern end. Although the British fleet was larger and had more firepower, Arnold used the lake’s terrain with great skill, hiding his fleet between Valcour Island and the lake’s western shore. When the British sailed past Valcour on its eastern side without spotting the Americans, Arnold ordered his ships to loop around the northern tip of the island and attack the British from the rear. The wind which had at first favored the British now favored Arnold. The battle lasted throughout the day and Arnold’s fleet was pulverised ship-by-ship but not before the British sustained such substantial damage that they were forced to retreat back to their end of the lake. With winter almost upon them, the British had to defer their army attack until 1777. 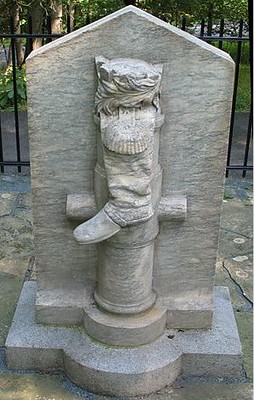 The Battle of Saratoga was more of a campaign than a single engagement. In the spring of 1777 the British relaunched their invasion southward on Lake Champlain, quickly capturing Fort Ticonderoga from the Americans. From there, the British continued southwest and crossed the Hudson River, expecting to link up with another British force moving up the Hudson from New York City. But for a variety of reasons, when that second force left New York City, it headed south into New Jersey rather than north up the Hudson. This left the British coming from Canada desperate for supplies and resulted in major foraging raids into Vermont (one of which was defeated at the Battle of Bennington). The main British force on the western side of the Hudson first engaged the Americans on September 19, 1775, at Saratoga.

The battle that day went back-and-forth but ultimately the Americans prevailed due mostly to the inspired leadership of Benedict Arnold who was in the midst of the action. But in his report of the battle to Congress, General Horatio Gates, the overall American commander who never left his tent during the fight, took full credit for the victory without ever mentioning Arnold. Incensed by this slight, Arnold demanded an immediate transfer which Gates obliged. Despite this transfer, Arnold lingered in the American camp and so on October 7, 1777, when the battle recommenced, Arnold was still in his tent not far from the action. Although he had no command of any kind, at the decisive point of the battle, Arnold jumped onto a horse and charged to the front of the lines where he so inspired the American forces that they prevailed and the British Army surrendered. Before the fighting had stopped, Arnold was shot in the same left leg that had been wounded in Quebec. As everyone knows, Arnold later betrayed his country and fought for the British. There’s a story that as a British general he was interrogating a captured American officer and asked what they’d do to him (Arnold) if he was ever captured. The officer is said to have replied, “We’d cut off the leg that was so nobly wounded at Quebec and at Saratoga and bury it with honors, then we’d hang the rest of you.” In that spirit, at the Saratoga National Battlefield today, visitors encounter a unique monument at the scene of Arnold’s October 7th heroics. The monument is a left boot with no mention of who wore it.

The War of 1812 was going well for the British by the summer of 1814. In August they had captured Washington D.C. and burned the Capitol and the White House. In September, a British invasion force was massed at the northern edge of Lake Champlain, ready to slice southward and separate New England from the rest of the United States. On September 11, 1814, a small U.S. Navy force under the command of Commodore Thomas MacDonough aboard U.S.S. Saratoga, engaged and decisively defeated the British force. Peace negotiations had commenced in August in the city of Ghent, Belgium. When news reached the two delegations of the American victory on Lake Champlain (called the Battle of Plattsburgh) along with news that the British force that had burned the Capitol had failed to capture Baltimore (see “The Star Spangled Banner” by Francis Scott Key), the British dropped any demands for territory to end the war and the treaty was finalized. (Andrew Jackson’s victory over a third British force outside of New Orleans took place on January 8, 1815, two weeks after the peace treaty was signed on December 24, 1814, and so it had no impact on the treaty negotiations).

So that’s some of the history of Lake Champlain. If you ever get a chance to visit, stop at some of the above-mentioned historic sites and use the “comment” feature on this post to suggest similar sites to see.