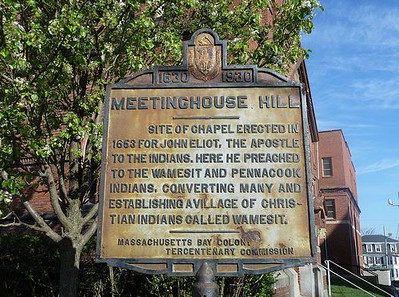 In 1930, the Commonwealth of Massachusetts observed its 300th anniversary, its tercentenary. To help commemorate the occasion, historical markers were erected around the state to mark important events in our history. The text of the markers was composed by Samuel Eliot Morison, Professor of History at Harvard University.

The Secretary of the Commonwealth published a guidebook that listed and described the various markers. Here’s a portion of the book’s introduction:

The travellers who shall pass by the many storied ways through the lands of the Puritan occupations in the ancient days of the Massachusetts Bay Colony, may now read on tablets set by roadsides or in city streets the tales which the ocean shores, the hills, the fields, the churches, the garrison houses and the old hearthstones, have to tell of the heroism, of the romance and of the tragedies, and of the unfaltering faith, of the ancestors of our Commonwealth.

Here are the book entries for the markers in Greater Lowell:

Billerica – Early name Shawshin, originally a part of Cambridge, set off as a town in 1655. Named after Billerica in Essex. Marker 1 on Concord Road at Billerica/Bedford line. Market 2 on Route 3A at Billerica/Chelmsford line.

John Rogers Homestead – Near this spot stood the John Rogers homestead, which was destroyed in the Indian massacre of 1695, and the entire family killed. On Billerica Avenue.

Danforth Homestead – Site of homestead of Captain Jonathan Danforth, pioneer of Billerica and famous surveyor. “He rode the circuit, chain’d great towns and farms to good behavior; and by well-worked stations he fixed their bounds for many generations.” Route 3A near Billerica Town Center.

Chelmsford – Settled in 1653 by people from Concord and Woburn. Named after Chelmsford in Essex. Marker 1 at junction of Route 4 and Route 110. Marker 2 on Route 3A at Princeton Boulevard and Middlesex Street.

Meeting House Hill – Site of chapel erected in 1653 for John Eliot, the Apostle to the Indians. Here he preached to the Wamesit and Pennacook Indians, converting many and establishing a village of Christian Indians called Wamesit. Summer and Haver Streets.

Wannalancet – On Wickasee Island (now Tyng’s Island) in the Merrimac dwelt Wannalancet, last sachem of the Pennacook Confederacy, and like his father Passaconaway, a faithful friend to the English. Pawtucket Boulevard at Vesper Country Club.

Mansion House – This mansion was built in 1675 by Colonel Jonathan Tyng for whom this town is named. It was the northerly outpost to the garrison house which stood a quarter-mile down stream opposite Wicassee Falls and Island where the Pawtucket Indians were settled. Route 3A.