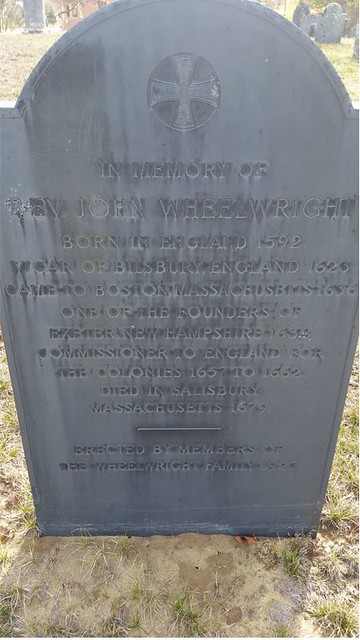 One of the oldest documents in the records of the Middlesex North Registry of Deeds was created in 1629. It’s a deed from a number of the various native American tribes in the Merrimack Valley and southern New Hampshire to John Wheelwright and several other residents “of the Massachusetts Bay in New England.”

The deed conveys a vast amount of territory, a rough rectangle that begins in Somersworth, New Hampshire, then runs along the Piscataqua River to Porstmouth, NH; then along the Atlantic coast to Salisbury, Massachusetts and the mouth of the Merrimack River; then along the river to Pawtucket Falls in Lowell; then north along the Merrimack, almost to Manchester, New Hampshire; then on a line running northeast to the point of beginning.

The deed is shrouded in mystery, partly because Wheelwright did not move from England to New England until 1637, eight years after the transaction purportedly took place; but also because no one recalls seeing this deed until it was “discovered” in a file in the York County (Maine) Registry of Deeds in 1707, twenty-eight years after Wheelwright died. The discovery was made in the midst of a lawsuit that contested ownership of some of the land covered by the deed. While the deed was very relevant to that lawsuit, its timely discovery, along with its execution before Wheelwright was even in America, contributed to the skepticism about the deed’s authenticity.

Beyond the story of this deed, Wheelwright himself was a fascinating figure. Educated at Cambridge University in England, he became a minister but was forced to give up that position and move to America because his Puritan-leanings ran afoul of the Church of England. Soon after Wheelwright arrived in America, he was engulfed in controversy when his sister-in-law, Anne Hutchinson, began preaching religious lessons that departed from the prevailing orthodoxy of the Massachusetts ministry. Wheelwright sided with his sister-in-law. They were both tried and convicted of sedition and contempt (separation of church and state was not a recognized concept in 1637 Massachusetts). Their punishment was banishment from the Commonwealth. Hutchinson went to Rhode Island; Wheelwright traveled north to the Piscataqua River, where he is crediting with founding Exeter, New Hampshire.

Circumstances compelled Wheelwright to move several times. Besides Boston and Exeter, he also served as a minister in Wells, Maine; Hampton, New Hampshire; and Salisbury, Massachusetts. He was also a college chum of Oliver Cromwell, so when Cromwell ascended to power after the English Civil War, Wheelwright moved back there and assumed an exalted position. Cromwell’s death several years later and the restoration of the monarchy in Charles II caused Wheelwright to retreat back to New England and resume preaching. He ended his career and his life in Salisbury, Massachusetts, where he died and was buried in 1679.

One Response to The Wheelwright Deed