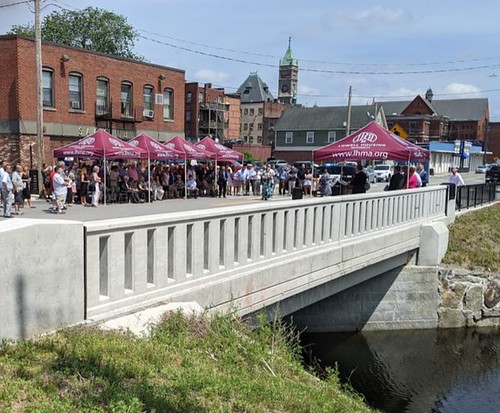 Last Sunday, June 27, 2021, several hundred people from across the region gathered on Market Street at the Western Canal to witness the dedication of the Philip L. Shea Bridge. The cement and steel structure that was totally rebuilt in 2019 now bears the name of the only individual to have held the offices of city councilor, state representative, and state senator, during the 77 years of Plan E government in Lowell.

Shea was elected to the Lowell City Council in 1969 in a transformational election that brought newcomers Paul Tsongas, Brendan Fleming, John Mahoney, Leo Farley and Shea to the council along with incumbents Richard Howe, Armand LeMay, Samuel Pollard and Ellen Sampson. Shea was reelected in 1971 and played a central role in the most contentious mayor’s race in at least the past 50 years. Through 15 ballots at the inauguration ceremony on January 3, 1972, Shea and Tsongas each received four votes but neither could secure the winning fifth vote. The council adjourned without electing a mayor and took up that business at the next evening’s regularly scheduled council meeting. During the 51 ballots cast that night, Shea, Tsongas and Richard Howe all received four votes on various ballots but none could reach five. Another recess was held and two night later, after 40 more ballots, Shea announced he was withdrawing his candidacy and would vote for Ellen Sampson who was elected mayor on the next ballot, the 106th.

In that same election, Paul Tsongas was elected Middlesex County Commissioner. Under normal circumstances both Shea and Tsongas would have resigned from the council and their seats would have been filled by the candidates who finished tenth and eleventh in the 1971 city election. But Shea and Tsongas were both strong supporters of City Manager Jim Sullivan who was just barely hanging on with the support of five of the nine city councilors. Both were comfortable with tenth place finisher Armand LeMay joining the council; he had ran as a Sullivan supporter but it was a different story with eleventh place finisher Samuel Pollard who was a vocal critic of Sullivan. If both LeMay and Pollard joined the council, that would make five councilors ready to fire the city manager. To avoid that result, Lowell political lore says that Shea and Tsongas agreed to flip a coin with the winner resigning (allowing Sullivan-supporter LeMay to join the council) and the loser of the coin flip remaining on the council until the end of that council term (preventing the Sullivan-opponent Pollard from joining the council). Tsongas won the coin flip and resigned from the council while Shea remained on the council, holding both that office and that of state representative for another year.

Redistricting eliminated multiple representative districts prior to the 1974 election. The old 31st district which had been held by Shea and Cornelius Kiernan was renumbered as the single-seat 45th district but Kiernan was appointed to be a judge at the Lowell District Court and Shea was unopposed in both the primary and the general election.

Shea was reelected without opposition in 1976 but by 1978 voters had chosen to reduce the number of state representative seats from 240 to the current 160 and Shea’s district was merged with that of incumbent Robert Kennedy. In a hotly contested Democratic Primary, Shea defeated Kennedy 3,591 votes to 3,407. Shea was unopposed in that year’s general election.

In 1979, the city councilor elected State Senator Joe Tully city manager. In the special election to fill the state senate seat, Shea was unopposed in both the primary and the general election. He was reelected to the state senate with token or no opposition in 1980 and 1982.

In 1984 when incumbent Congressman Jim Shannon ran (unsuccessfully) for U.S. Senate, Shea and his State Senate colleague Chet Atkins ran for the vacant Congressional seat with Atkins winning with 43,538 votes to Shea’s 38,737.

Shea attempted an electoral comeback in 1992 when he ran for his old state senate seat, however, in the Democratic Primary he finished second to Dan Leahy (the late father of current Lowell Mayor John Leahy). 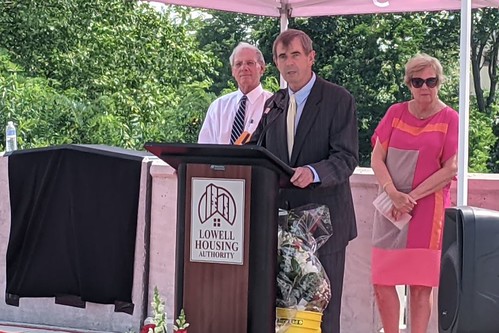 Secretary of the Commonwealth Bill Galvin speaking at the dedication of the Phil Shea Bridge. Shea is to the left; City Manager Eileen Donoghue is to the right.

The call of public service continued for Phil Shea who became the budget director of newly elected Secretary of State Bill Galvin (with whom Shea has served in the House of Representatives). Shea continued in the budget director position until his retirement in 2002. Since then, he has remained active in public life, serving as the city’s representative on the Lowell Regional Transit Authority and as the chair of the Lowell Housing Authority.

At last Sunday’s ceremony, the Master of Ceremonies was former City Manager and State Representative Kevin Murphy (who got his start in politics as a State House aide to Phil Shea along with others such as UMass President Marty Meehan and Lowell City Councilor Rodney Elliott). Also speaking at the bridge dedication was Secretary of State Galvin, City Manager Eileen Donoghue, Mayor John Leahy, Councilors Dan Rourke and Bill Samaras (they jointly made the motion to name the bridge), and Lowell Housing Authority Executive Director Gary Wallace who also organized and oversaw the very classy dedication event. 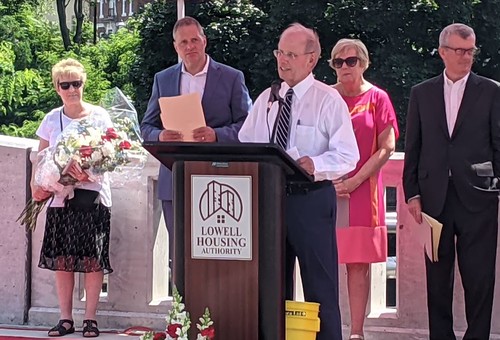 When it came time for Phil Shea to speak, he grew emotional, talking about how he grew up on this very block in a Housing Authority unit after the untimely death of his father. He thanked everyone who had helped him along the way, especially his four children (who were all present with their spouses and ten grandchildren) and his girlfriend Anne Farley. He emphasized that the guiding force through his life in politics was to never forget where he came from.

The dedicatory plaque affixed to the bridge will now serve as a permanent reminder of Phil Shea and the importance of that place in his life. The plaque reads:

Philip L. Shea was a proud Lowell native with a lifetime of accomplishments. Shea grew up on Lewis Street in the Acre’s North Common Village. During his political career, he was instrumental in developing federal, state, and local partnerships to revitalize the City of Lowell. He was widely recognized for his leadership and mentorship of young public servants to ensure they reached full potential. Shea served in the Lowell City Council, Massachusetts House of Representatives, State Senate, and as Chairman of the Lowell Housing Authority.

“Never forget where you came from.” 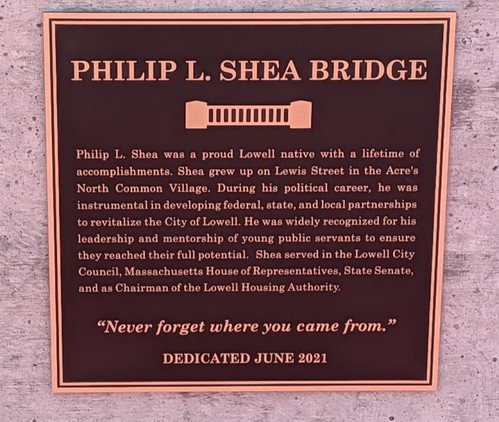