What better way for Trasna to honor the conclusion of National Poetry Month in the United States–and celebrate the First Anniversary of Trasna–than with the current work of Daniel Wade, a rising star in the world of poetry! An award-winning playwright and a novelist as well, Wade appeared in Trasna in November, 2020, with his insightful tribute to his mentor, Dermot Healy. Daniel Wade is hitting his stride this year: Rapids, his debut volume of poetry will be published (by Finishing Line Press) in August, 2021, and his novel, A Land Without Wolves, (from Temple Dark Book) will arrive in October, 2021. The following four selections, evoking the classic and contemporary, including a sonnet, written and read by Wade, will whet your appetite for Rapids.

Not sure where I am, exactly: the wind’s icy babble

above an unbuilt LUAS stop as a Brazilian rickshaw

before the night gets busy. What if I call him friend,

or follower? I double-tap a thousand profiles

before seeing yours; then, and only then, do I know

that love is unavoidable.

I try teaching myself your language, the warp

of its adjectives, the way the verbs squat

on the tongue, your glossary’s proper annunciation.

Do I now have your approval?

A single glitch is all it takes for the Leap Card

skips from KeyWaste brim over

with black, bloated bags at the Red Line depot.

a submarine, its radar tuned to a garbled frequency.

in a doorway, her shelter of damp cardboard

and piss-damp sleeping bag. What if I asked her

her name, at least?

Across the street, a Highway Maintenance crew

On the Shooting of Lyra McKee in Derry

So, do we avenge the murals and saintly bones

scattered over Creggan streets, with cold

intent of gunmetal where soldiers once patrolled,

to step over, keep her in mind: a reporter on hold.

No-one declared this ground as sacred, or refuelled

it for us to strike matches, hold up our phones

and record her last moments before a stray

with sodium, cruised through the dark. Just say:y

“No, no, not this again,” and abide the sorrow

freed of blood, silence, the tears of tomorrow.

The sybils didn’t bother with me

but one or two poets filled the blanks in:

an Ithakan king, vying for the sea,

conscripted men to the mast on

his flagship crossing to Troy.

of rudderless roving, would die

in some way or another. I’d outlast

my comrades, my skull a cave

for every marooned thought,

cleared by sea-winds. The waves’

of spray, was my eternal clock

to flail and flare on the ebb.

I stood watch as if on my ship’s deck

and slept in a berry-shrub

at night, held my hungry peace.

He was out there, tremoring the island

with his rams, roaring without cease,

in one gored eye and still raging.

Him, and a tribe of him, their fangs

I’d neither the brains nor the backbone

to engineer my escape, as my pilot

had. I preferred to linger, my beard laden

with barnacles, and eye the blood-lit

and shore, and the sun’s daily whim

beat too heavily for comfort. When

sleep did take me, I saw brass shields,

I prayed for the gods to be cruelly kind

and smite me with flood or drought;

somehow I kept my presence of mind,

did not gasp my despair out.

I needed a woman, needed her touch

and kiss. I thought often of the girls

for my mind to stoop on. Heavy scrolls

of loneliness, heat-rippled, tore at me.

I’d see none of them again, I knew,

had drunk my life’s fill of their beauty;

hand, not crushed or sunk or devoured.

I prayed for that much, at least: the plans

of Olympus to see me safely delivered

from his eyeball’s crimson gush,

the cave we’d made our woollen escape

from gawking at the bay, lethal hush

stirring him from sleep, the grapes

that gave him his wine burst in his palm,

his voice and footfall alike echoing

the strafed harmonic of thunder. Blessed to swim,

or condemned to sink: I’d no way of knowing

until a fresh, high glut of tide brought

the Dardanian galleys, and my first glimpse

of raised sails, bellying and white,

in an age. Mariners walked in slumps,

leaning to their oars, arid lips

panting for haven and home, beards

a fleet steered clear off the map’s edge

and held back, afraid for my life.

But these were men in the anchorage,

not beasts. Surely blood was enough

for mercy; with my thorn-fixed cloak,

what possible threat was I to them now?

felled me at the knee, and I howled out:

“Men of Troy, fly you far from this shore!

Where you make port is not important.

The danger you here face is too great to ignore.

Put back to sea, save yourselves this instant!

I who was your Grecian foe, now beg thee

to grant but one meagre service:

bring me with you if you will, or else kill me!

But cast off now, before the giants arise!”

I say this without shame: I wept, groveled,

kissed the barren sand before them.

The oldest of them stepped forward

to give me his hand, and I stood abeam.

Their captain, a born survivor as mine

once was, saw the giant for himself

and did not stay to fight. Jaded as his men

were, he led them back down the pebbly shelf

to the ships, with myself in their number,

and we slipped a swift course from the cove.

The one-eyed clan cursed our venture

but fathoms ran too deep for their heave,

their stride. Now seaborne and free at last,

I was ragged locus for the shoal

under the bare walls of the Geloan.

I saw we had a good skipper, wary

in his pilotage but alert to the dreaded

unfolding of a voyage, dogged emissary

for nomads. Yet he never claimed

to know his heading; he was as lost as I.

As gratitude, I kept my head down

and worked the mains, my new duty

They fed me, healed me, found me a home.

And it came as no surprise of late

that a price isn’t on my head, or that no-

one even set off in search of me

or my brothers. Yet I am here, thankful

and restored, saved by an enemy

whom I greet and look to now as an idol

of my flight, no longer hunched

as the rock I saw the blind herder fling

at my receding ship. So from staunch

shores, now, may my voice once more sing.

In Virgil and Ovid, the Greek castaway Achaemenides is a member of Ulysses’ crew who is left stranded on the island of the Cyclopes after his comrades make their escape. He lives on in the hills until he is eventually rescued by Aeneas, who is seeking a new homeland following Troy’s destruction at the hands of the Greeks.

Naturally, under the brownstones’ squat shade,

you see moss and weeds sprout up

from each thin, aged slit along an anterior patio,

the sun’s molten crest left to ripple and stoke

behind Fenway Park, or the Charles unspooling

ten million pounds of sludge into the ocean

you remind yourself that it takes just a look

or word freighted with design, for love to begin

93 North is half the experience, in your dad’s silver

Honda-Accord, amid dump trucks and 4x4s,

beyond the subway’s reach, while I ride shotgun,

‘Come as You Are’ (the MTV Unplugged version),

replete with audience whoops and an extra rogue note

slipped into the main riff, starts up. We both say

nothing, our voices bottled, stilled to a cool finish,

and enjoy the drive ahead. But there are things I should

say that I’d rather you didn’t hear just yet: the ex

I kissed and re-kissed without your knowledge,

the girls I conjure up when I’m wanking, the looks, words

and fucks held in inimical reserve—all of this I need

to tell you now and only now, on the road ahead, swept clear

by headlights, while we still have the luxury of time. 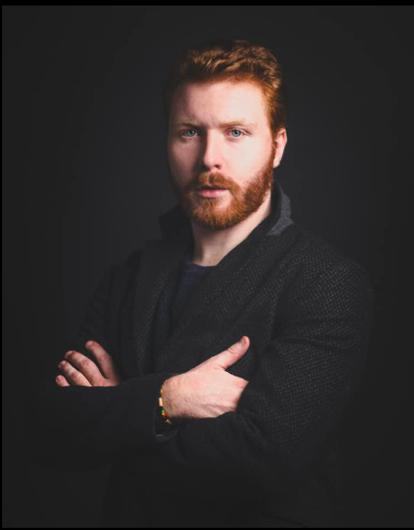 Daniel Wade is a poet, playwright and fiction writer from Dublin, in the Republic of Ireland. Daniel was the Hennessy New Irish Writing winner for April 2015 in The Irish Times, and his poetry and short fiction have featured in over two dozen publications since 2012. In January 2017, his play ‘The Collector” opened the 20th anniversary season of the New Theatre, Dublin. His spoken-word album “Embers and Earth”, available for download on iTunes and Spotify, launched the previous October at the National Concert Hall. A prolific performer, Daniel has featured at many festivals including Electric Picnic, Body and Soul, and the 2019 International Literature Festival (ILFD). In January 2020 his radio drama ‘Crossing the Red Line’ was broadcast on RTE Radio 1 Extra, and later won a silver award at the New York Festivals Radio Awards for Best Digital Drama, whilst November 2020 saw his screenplay ‘Strike’, co-written with filmmaker Shane Collins, nominated as a finalist in the 2020 Waterford Film Festival. His debut collection ‘Rapids’ is due to be published by Finishing Line Press in August of 2021, whilst his novel ‘A Land Without Wolves’ will be published by Temple Dark Books in October of the same year.