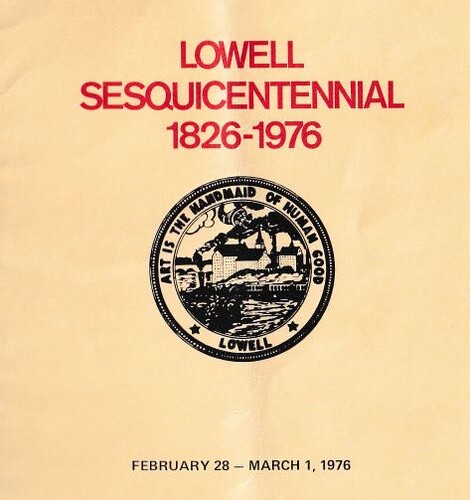 Fifty years ago this week Congressman F. Bradford Morse wrote the following letter to Lowell Mayor Richard P. Howe (my father) urging the city to begin planning for the 150th anniversary of the grant of the charter for Lowell which coincided with the 200th anniversary of the United States. This letter details the planning process for sesquicentennial observance which is especially relevant to us since the city’s 200th anniversary in 2026 will soon be upon us. However, Congressman Morse also provides evidence that several of the major development like Lowell National Historical Park which opened in 1978 was already under development in 1971.

I have been giving considerable thought to the role which Lowell might play in the National Bicentennial in 1976 and would like to share with you and the City Council some ideas and suggestions.

Lowell is the cradle of the industrial revolution in America. For several decades in the mid-nineteenth century it was the industrial showplace, not only of the United States, but of the world. Early Lowell’s social and cultural development and thriving industry were the object of intense study and stirred the enthusiasm of scholars and dignitaries of Europe and America.

Each of the great immigrations that enriched America in the second half of the nineteenth century and the first decades of the twentieth made lasting contribution to Lowell as the City grew from a Yankee textile center to a city of varied ethnic and industrial character typical of the nation as a whole. Lowell was a fountainhead of the labor movement in America.

Not only is Lowell the archetype of the American industrial city. It is the first. And, by happy coincidence, its 150th anniversary falls in the same year as the nation’s bicentennial. Lowell was incorporated by the Massachusetts General Court in 1826, comprising land formerly of East Chelmsford, and later achieved cityhood and expanded into Dracut and Tewksbury.

Even without the coincidence of the two anniversaries, Lowell would deserve a prominent place in the national observance. In the year of its Sesquicentennial the prominence of Lowell is assured.

The Sesquicentennial will afford the city an exceptional opportunity to publicize itself over an extended period and attract favorable attention in the national and international press. The strong community spirit aroused by a Sesquicentennial observance would have many happy consequences. Not the least of these would be a more favorable climate for economic development.

Lowell has a lot to be proud of. We have an active and learned Historical Society whose archives are even now being cataloged at the Library of Lowell Technological Institute. The Department of Interior soon will have under consideration a proposal to create an Urban National Park comprising wide areas of the City and the adjoining countryside along the Middlesex Canal. A half a dozen or more private and public agencies are supporting this proposal which is being drawn up under Lowell’s Model City Educational Program. A Historical District Study Commission may soon be appointed to work out plans for the preservation of other sites illustrative of Lowell’s history extending to early colonial times.

I am hopeful that Lowell will be one of the first of America’s cities to apply modern systems analysis techniques to the improvement of the quality of urban life under a proposal already submitted to the Department of Health, Education and Welfare. This will be an important step in reestablishing Lowell as a model industrial city.

With all the timely action being taken to revitalize the city, we must not overlook the importance of getting the message out to the rest of the world. Lowell should be the subject of films, magazine and newspaper articles and a new history to be published in 1976 – – to name just a few media. It is not too soon to lay the groundwork for all these projects, and perhaps a museum as well.

For this reason I would like to offer my services and the services of my staff, both in Lowell and in Washington, to assist you in organizing and coordinating the various efforts under a single Sesquicentennial Committee. You will certainly have my fullest personal cooperation and assistance in all matters involving the Federal Government and national organizations concerned with the United States Bicentennial to assure that Lowell receives the special recognition that is due.

With high esteem and best wishes to you and all members of the City Council, I am