The B.F. Butler Cooperative Bank was founded in Lowell in 1901 by members of the family of Benjamin F. Butler, the notable Civil War general and Massachusetts politician. The bank continued in operation until 2010 when it was acquired by People’s United Bank.

I recently found an old but undated brochure produced by the bank about the accomplishments of General Butler. Here is the content of the brochure. Some of the language used reflects the vocabulary of the time when the brochure was produced: 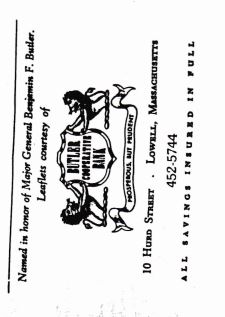 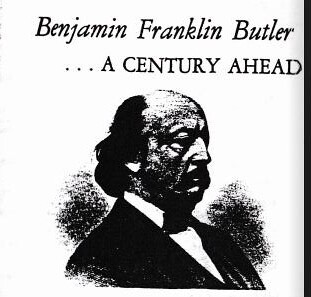 Always the center of controversy and a scapegoat for powerful vested interests, Benjamin Butler confounded, confused, and fascinated this 19th Century contemporaries by shrewdly adapting his zeal for real Democracy to the turbulent developments of the Civil War, Industrial Revolution, Reconstruction Crisis, and the Reform Movement. Now, a century later, his stature increases as we note with amazement how his “radical” ideas and achievements pioneered the commonplace of today.

1840 – Admitted to practice before Massachusetts Bar.

1853 – Elected to Massachusetts House of Representatives.

Through The Eyes of Others

Jefferson Davis (for whom Butler voted 57 times at the Charleston Convention in 1860!) – “Now therefor, I, Jefferson Davis, President of the Confederate States of America, and in their name, do pronounce and declare that said Benjamin F. Butler to be a felon, deserving of capital punishment – an outlaw and common enemy of mankind – in the event of his capture – to be immediately executed by hanging.”

John Hay “Butler is the smartest damned rascal I ever knew.”

Richmond Examiner “The beastliest, bloodiest poltroon and pickpocket the world has ever saw.”

Wendell Phillips “There is no man in public life who does as much gratuitous work as General Butler. It is rare indeed that a poor man who has had a grievous wrong to be righted leaves his office without a gift of Butler’s services.”

Susan B. Anthony “Glorious old Ben! He is surely going to pronounce the word that will settle the woman question, just as he did the word “contraband” that so summarily settled the Negro question.”

President (General) Grant “Butler is a man it is fashionable to abuse but he is a man who has done the country great service, and who is worthy of its gratitude.

Boston Globe “Soldier, statesman, lawyer, patriot, the career of General Butler reads like a romance – he will rank among the famous and commanding figures of the 19th century – he was in truth, not merely part of the career of the nation, but in a peculiar sense a real maker of our history.”

New York Herald “He will be remembered as a remarkable American.”

1880 – Changed from Republican back to Democratic Party.

Investigated and reformed conditions at Tewksbury Almshouse and other state institutions for the unfortunate.

1884 – Candidate of Greenback and Anti-Monopoly Parties for President: “We want money based not only upon gold, but upon every other source and element of national prosperity, emancipated from the control of all other nations – paper money that would not even be a promise to pay (in specie)” (J.S. Currency – 1965).

In addition his platform included:

Before the Supreme Court, won decision that Greenbacks were legal tender in payment of private debts.

1893 – Sudden death in Washington after regular business day. Three day lying-in-state at Lowell’s Huntington Hall while 100,000 mourners passed his bier. Military funeral from Butler residence in Belvedere (sic) to Hildreth family cemetery. (In Lowell, but legally part of Dracut.) Epitaph: Benjamin Franklin Butler . . . Jurist, Soldier, Statesman, Patriot . . . His talents were devoted to the service of his country and the advancement of his fellow men. The true touchstone of civil liberty is not that all men are equal but that every man has the right to be the equal of every other man if he can.

1838 – As Dracut Academy Headmaster promoted parent-teacher organization, and use of visual aids, field trips, and science experiments in Chemistry and Physics.

1846 – Fought for and obtained license for Lowell’s first theater.

1848 – Advised mill workers to gain reforms by ballots not bullets.

1850 – Named “Champion of the working classes” by Horace Greeley.

1859 – Sponsored Bills to declare drunkenness a disease not a crime, to establish a Superior Court system, and grant equal suffrage to the foreign-born.

At Democratic Convention in Charleston, S.C., warned the South that the North (and he) would fight.

Returned to Massachusetts convinced that war was inevitable and put his Militia Brigade on war footing.

Urged President Buchanan to arrest and try for treason the Confederate “Commissioners” negotiating in Washington.

His “Contraband of War” handling of liberated slaves, by what Lincoln called “Butler’s Fugitive Slave Law,” was the forerunner of the Emancipation Proclamation.

First to use balloons for military reconnaissance, and to use railroad artillery.

1862 – Gave Army support to Farragut’s taking of New Orleans and set up Military Government of areas.

Set up schools for Negroes and organized Negro regiments.

Stopped feminine insults to troops by famous self-executing “Woman of the town” order. Cleaned up the city’s disease-ridden sewage situation.

Allowed “trading with the enemy” to feed starving New Orleans.

1863 – Turned down Lincoln’s offer of Vice-Presidential place on ticket. Said he didn’t “deserve the punishment” but would accept if Lincoln would agree to die within three months of election!!

Appointed Clara Barton Superintendent of Department of Nursing, Army of the James.

1865 – Opposed “soft peace” and became a “Radical Republican.” He regarded South as a collection of “conquered territories” not “sister states.”

1866 – Actually “waved the bloody shirt” (in Congress) of an Ohio carpet bagger tax collector who had been badly mauled in Mississippi.

First Member of Congress to be elected from outside his home district. Established residence in a tent on his Bayview, Cape Ann, property.

Opposed Alaska purchase, but made $30,000 fee out of Perkins suit against Russia.

1869 – His “Cede Canada or Fight” slogan promoted “Alabama Claims” for U.S. against Britain.

Upheld Constitutionality of Woman Suffrage Bill and supported it.

Pushed through his Civil Rights Bill: (90 years ago!): “Full and equal accommodations, advantages, facilities, and privileges of inns, public conveyances, theaters, places of public amusement, and also of common schools and public institutions of learning.” Congress passed it after knocking out “Education Clause.”